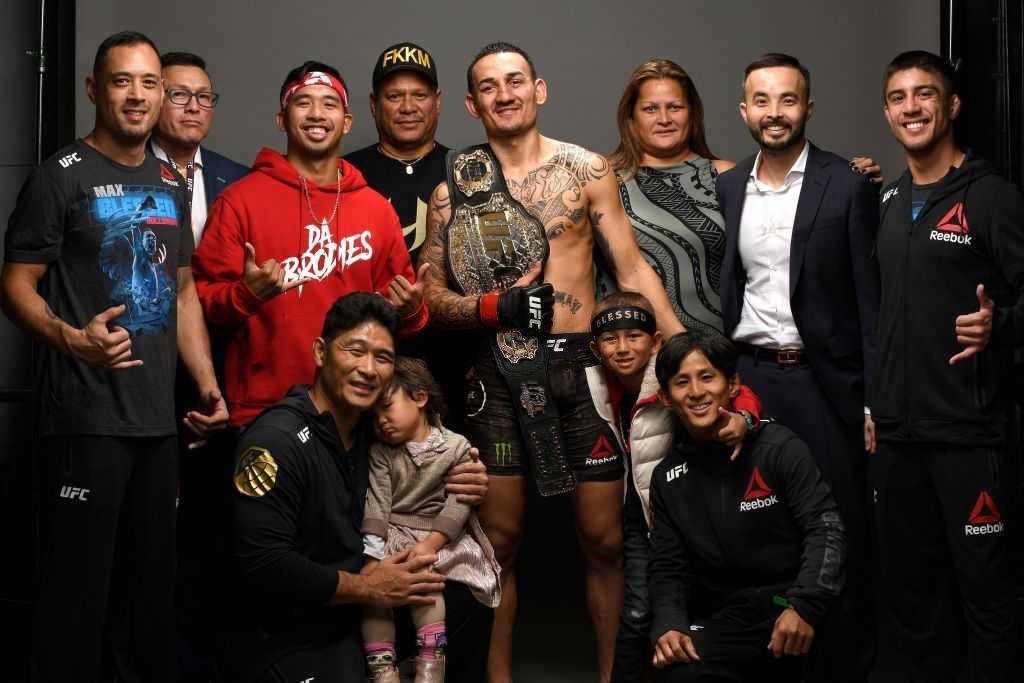 Jerome Max Keli’i Holloway is undoubtedly one of the best fighters in the UFC. Born and brought up in Honolulu, Hawaii, and raised in Waianae, the Hawaiian was always going to be a fighter. From being a shy, young boy to becoming one of the most clinical boxers in the UFC, ‘Blessed’ has surely come a long way.

As an adolescent, Max was quickly drawn into the world of fighting. Moreover, Max began his fighting career before he even left high school. Hence, by the time Max finished high school from Waianae High School, he already had a 4-0 amateur record.

Currently, Max Holloway is one of the most successful fighters on the planet. He owes his success to the people that believed in him. As such, let us take a closer look at Max Holloway’s Family, and how they have inspired him to become the man he is today.

What Do We Know about Max Holloway’s Parents?

Happy Mother’s Day to these 3 beautiful women and to all you mothers holding it down. Nothing in this world more scarier then a mother 😂❤️ pic.twitter.com/XTSeysC8Gh

Both of Max’s parents, Mark and Missy were heavy drug users. Whilst Max’s mother, a crystal meth addict was able to recover, less is known about his father. Mark Holloway would constantly abuse Missy and eventually chose to leave when Max was 11 years old.

Despite the separation, Missy was able to support her son with the help of her family. Hence, she deserves a lot of credit for everything that her son has achieved to date. In a way, she has single-handedly kept Max Holloway’s family together.

Currently, “Blessed” is engaged to his long-time love interest and girlfriend, Alessa Holloway ( previously Quinzon). The couple shared their engagement news via social media, wherein Max claims, “She said Yes. 🤍“. Interestingly, Alessa Quinzon is a professional surfer and won the Maui and Sons Pichilemu Woman’s Pro in the year 2015. Quizon also got 9th position in Maui Women’s Pro and Roxy Pro France in 2016.

Moreover, Alessa Quizon is currently rank #83rd in the World Surf League. Quizon’s first season as a pro-surfer took place back in 2009 Women’s CT. Apart from that, Alessa has a huge following on social media. She boasts of more than half a million followers on Instagram.

My other WHY. Behind every strong man is a stronger woman! I love you boo! #mrsblessed pic.twitter.com/IxFTzruX00

Before his engagement with Alessa Quinzon, Max was married to Kaimana Pa’aluhi. The couple was in a long-term relationship and possibly high school sweethearts. As such, Max and Kaimana got married in 2012 in a grand and splendid wedding in the presence of many family and friends.

However, due to undisclosed reasons, the couple got divorced in 2014, just two years after getting married. Despite their separation, Max and Kaimana are still on good terms and have also assumed joint custody of their son, Rush Holloway.

Professionally, Kaimana Pa’aluhi is a model and has also starred in a few films. Since she keeps all her business private, there is no information about her dating life ever since her divorce from Max. Kaimana’s Net Worth sits at a reported $500,000.

Out of anyone, it appears that Max possesses the closest and deepest relationship with his son, Rush Holloway. “Mini Blessed” as Max calls him, is the fighter’s son with ex-wife Kaimana Pa’aluhi and also his only child to date. The father-son duo shares a special bond that is unlike any other.

The duo travels together for Max’s work trips, interviews, press conferences, and his fights. The pair also hang out regularly and play video games together. Rush Holloway has been in the public eye when he was seen crying during one of Max’s fights. Like any son, Rush was concerned when his father began bleeding profusely during the fight.

Despite the split, Rush is able to enjoy the company of both his parents. Moreover, the young Hawaiian has grown close to his stepmother, Alessa s well. Hence, we can say that although they are not traditional, Max Holloway’s family has undoubtedly done well for themselves.