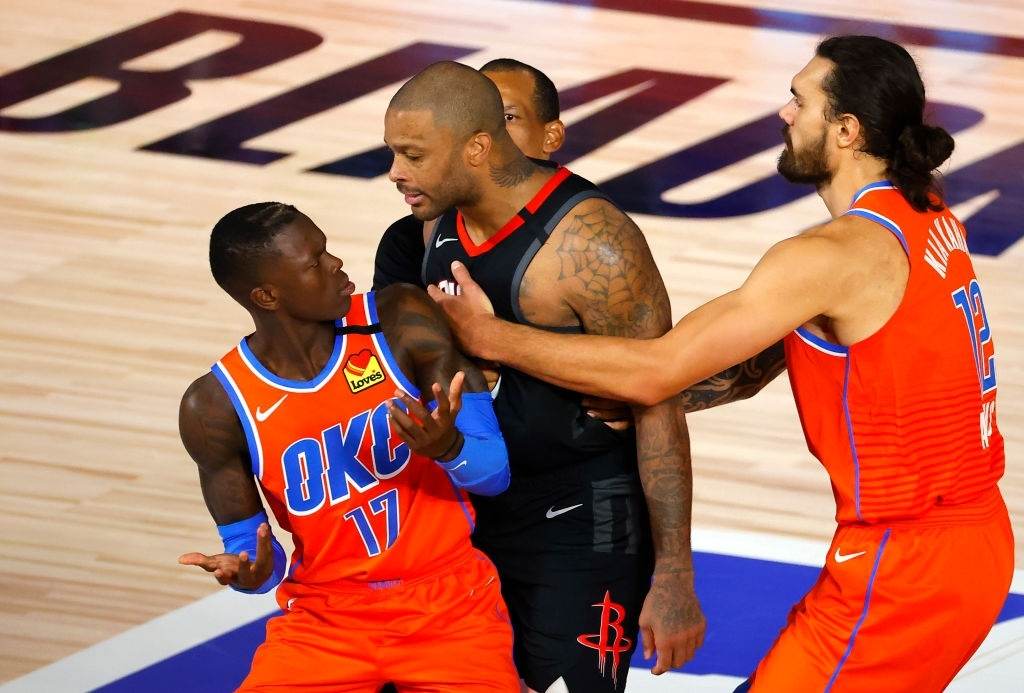 The NBA authorities have fined Oklahoma city thunder guard Dennis Schröder and Houston Rockers ‘Center’ PJ Tucker 25000 dollars each after their scuffle in the game 5 of the first round of the playoffs. Usually, in the playoffs, we get to see some heated moments between the players but rarely does the NBA fines players. This incident really took it to another level as the league authorities have charged huge fines, and it proves that the competitiveness of this NBA season is definitely at a different level.

Both of these talented players, who are the key players in their respective squads, just escaped a game suspension from the playoffs. The fight started when Schröder was trying to get past a screen put by PJ Tucker and tried to hit him below the belt. An angry PJ Tucker was unhappy from this unsportsmanlike conduct decided to confront Schröder. During their confrontation, Tucker sort of headbutted Dennis. The referees and the players intervened before things could escalate any further. These actions got both of these players to appear before the court.

“Oklahoma City Thunder guard Dennis Schröder has been fined $25,000 for making contact to the groin area of Houston Rockets forward PJ Tucker and Tucker has been fined $25,000 for approaching Schröder and making contact with him in escalation of the altercation,” it was announced today by Kiki VanDeWeghe, Executive Vice President, Basketball Operations.

Here is the video of the altercation:

Upon League Office review, it was determined that Tucker’s contact with Schröder did not meet the standard for a headbutt. The incident, for which Schröder was assessed a Flagrant Foul 2 and ejected and for which Tucker was assessed a technical foul and ejected, occurred with 6:51 remaining in the third quarter of the Rockets’ 114-80 win over the Thunder on Aug. 29 at The Field House on the campus of ESPN Wide World of Sports in Orlando. “

After further analysis of the game tape, it was confirmed that Schröder ignited the fight, yet both of these players will have to shell out of a massive amount of 25000 dollars. Both of these players have huge contracts with their respective teams. With an average salary of approximately 18 million dollars, Schröder is way ahead of PJ Tucker, who has an annual salary of roughly 8 million dollars. Therefore such small NBA fines won’t affect them.

“It’s really unfortunate…We’ve been on each other since 2012 when we played in Germany together…It’s never that we’re competitors; we try and go out there and compete as hard as we can….But, me myself, my family didn’t raise me that way to hurt somebody intentionally.” Said Dennis said in his interview on Sunday.

After the ejection of Dennis, who is one of the prime scorers for the Thunders this season, the Rockets went on to win the game by a huge margin 114-80. With Russell Westbrook back in the lineup, the Rockets are looking fiercer and the young Thunder side is facing elimination by trailing the series 3-2.