The Brandon Moreno vs Deiveson Figueiredo 4 bout was supposed to be the first Quadology in the history of UFC. The fight managed to happen even though Deiveson struggled with weight cut issues but in the end, came to an unceremonious ending. Fans unfortunately were not very kind in their response after the results didn’t go their way.

Brandon looked good all throughout the fight as he had adjusted many of his mistakes from the previous fight. Figueiredo unfortunately looked the same and didn’t find much success against his opponent. Not fighting anyone but ‘The Assassin Baby’ seemed to have affected his performance badly.

In the end, Moreno managed to catch the Brazillian with a punch to the eye and the doctor had to end the fight.

The Mexican was thrilled after finally beating his long-time rival, so in his post-fight interview, he tried to explain the situation to the locals. He claimed he had nothing against Brazil and he was only doing what he had to do so that he could put food on the table for his family. At one point he couldn’t control himself and shouted out, ‘Viva Mexico, Perros!”

Now ‘Perros’ normally means ‘Dogs’ in Spanish but in this context, it means something akin to ‘Amigos’ or ‘Friends’. But the fans misunderstood and got very upset. As retaliation, they began throwing almost everything they had at the Mexican. 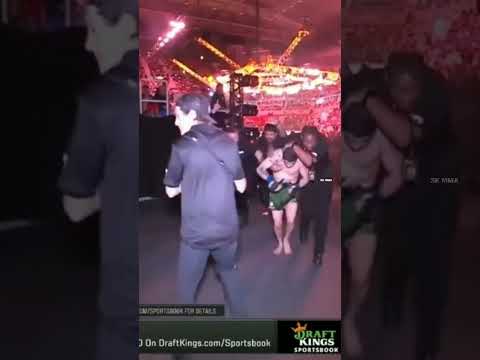 Ariel Helwani reacted to the situation by saying, “Rio fans showering Moreno on the way out with drinks. Horrible.”

In the next fight, Glover Teixeira escorted his opponent out of the Octagon so that such incidents wouldn’t repeat as both fighters were already injured. Such behaviors of course call into question Brazil’s status as a safe destination for UFC events giving slight levels of validity to the extremely controversial Colby Covington speech back in 2017.

“We still here, it’s comeback season!” Ex-UFC champ Luke Rockhold hinting at a comeback after his recent retirement
“He cannot always be with me” Islam Makhachev reveals harsh truth on Khabib Nurmagomedov for not to be in his corner vs Alexander Volkanovski at UFC 284