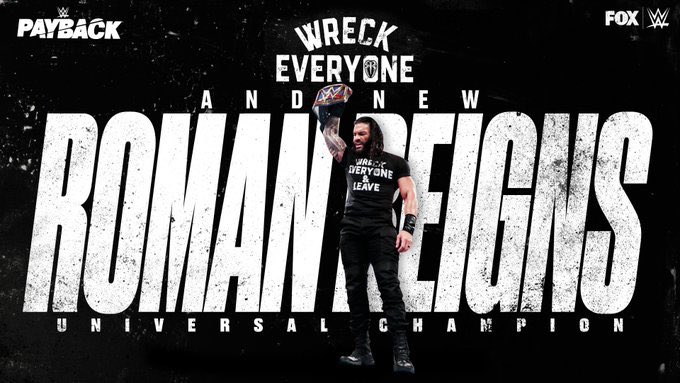 Roman Reigns kept his promise of winning back the Universal Championship as the big dog emerged triumphant in the no holds barred triple-threat match at WWE Payback. With Paul Heyman in his corner, Reigns unleashed a monster of his own and destroyed Braun Strowman before pinning him for the win.

With delayed entrance to the match and delivering low-blow to the Fiend, Roman confirms his first-ever heel turn. It seems WWE has big plans for heel Roman. His rivalry with the Fiend might go to another level as the alter ego of Bray Wyatt lost his championship without pin fall.

When Heyman’s client was busy celebrating his victory, Twitter exploded with tweets related to this new persona of Roman. #RomanReigns soon became trending along with #WWEPayback. Here are some tweets reacting to Roman Reigns’ Universal Championship win.

Holy hell this is amazing!

LOVED that main event. Exactly what it needed to be and maybe a little bit more.

Enjoy the heel Roman Reigns ride everyone. They’re giving us what we want.

Spear on Braun and Roman Reigns is the new champion! #WWEPayback

ROMAN REIGNS IS THE NEW WWE CHAMPION!!! LETS FUCKING GOO!!!!!!!!!!!!! HEEL REIGNS RULES AND HATERS CAN CRY! #WWEPayback this was really smart how they did this! Good main event! The reigns era is back !!!! I hope we get a new belt from this!

Roman Reigns put over EVERYBODY in 2019. He didn't go for a title once (okay, IC title match against Nakamura — but that was only to start the Corbin feud).

Reigns deserves this title reign. He deserves a long ass one. And boy, I'm ready for it!

Fans can’t wait to see what new Roman has in store for the WWE universe with his new reign. After all, fans long-waited to see a heel turn of the Big Dog for so long. And when it finally arrives, it comes in with a bang. The upcoming heel vs heel feud with the Fiend will reach new heights.