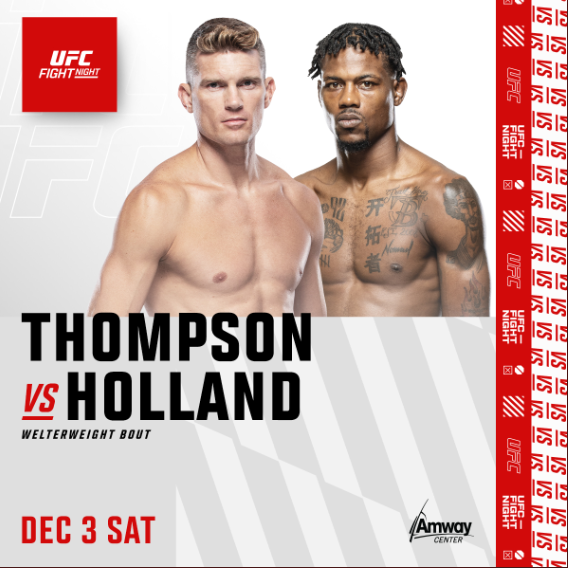 Prior to the announcement, Holland had announced his “retirement” from MMA earlier in the week. In recent years, the 29-year-old has been one of the most active competitors on the UFC roster. This will be his fourth bout of the year in 2022.

Holland the ‘Trailblazer’ is coming off a one-of-a-kind fight week at UFC 279 last month, when he was supposed to face Daniel Rodriguez but instead faced Khamzat Chimaev on literally one day’s notice. The change occurred after Chimaev failed to make weight for a fight against Nate Diaz. Holland was defeated through submission in the first round.

On the contrary, Stephen Thompson is a two-time championship challenger and the No. 7 welterweight in the UFC. The 39-year-old veteran hasn’t fought since 2022, and he’s publicly requested that the UFC book him against another striker rather than a grappler like he’s faced in his previous two fights.

Holland intended to stake his claim for a ranking at UFC 279 after a successful switch to welterweight saw him reel off two stoppage victories over Alex Oliveira and Tim Means.

“Big Mouth” has been given the chance to climb up the ladder against the veteran at UFC Orlando, yet he was unable to achieve that goal after being the victim of some significant card changes late in the the day.

As expected, the out-of-the-blue announcement prompted some interesting responses on social media, with Holland’s fake retirement being the dominant topic.

Like many, one user claimed to have not been at all fooled by Holland’s career-end claims. In addition, they suggested that the “stand and bang” matchup between Holland and Thompson was the perfect fight to make.

Here is the line-up for UFC Orlando: