10 matches where one player alone demolished the opposition 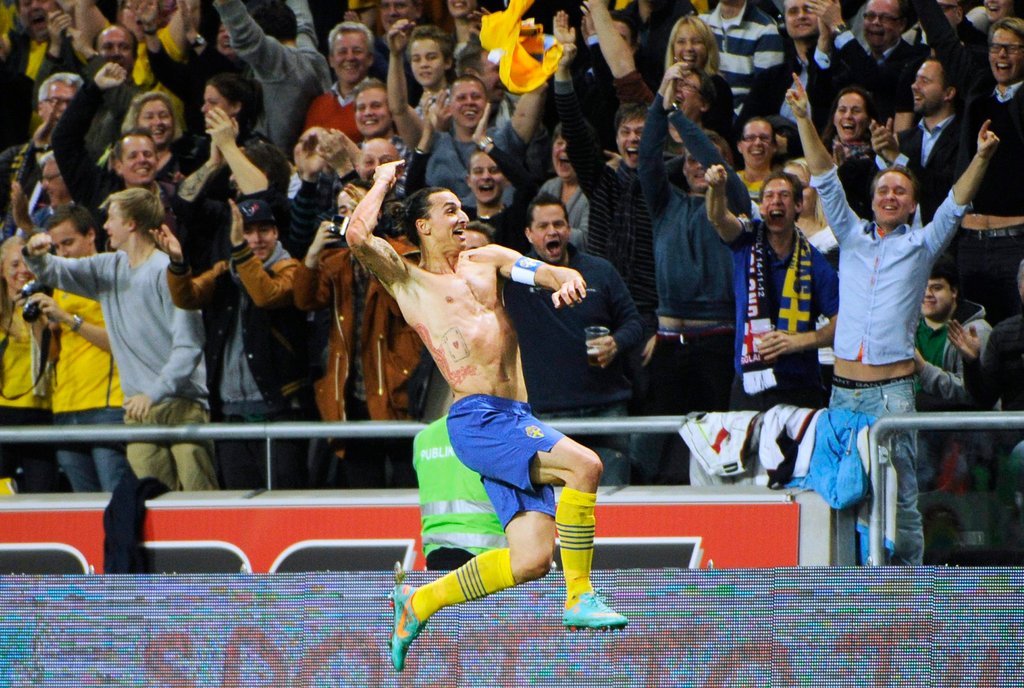 Football is a team sport and, as such, it demands a collective effort from all players for a team to be successful. But, inasmuch as this statement is true, there is also the need to understand that the quality of some players supersede that of others.

Some talents are just so special that they cannot be tamed or ignored. Take the Cristiano Ronaldos, Lionel Messis and Robert Lewandowski for example; these are players who have won games singlehandedly due to their standout performances.

While credit must always be given to every player who plays a role in the lead up to a goal, the ultimate game-changers also deserve their due. For it is they who rise to the occasion when the going gets very tough.

We at Sports Zion have, therefore, chronicled 10 matches where single player demolished the opposition: 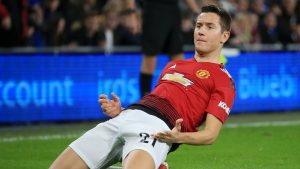 Strikers are usually the tormentors-in-chief in a game, but Ander Herrera’s performance against Chelsea in the 2016/17 season is one that cannot be ignored. The Spain international put up a man-of-the-match performance as the Red Devils recorded a 2-0 win over Antonio Conte and his Blues.

Chelsea had beaten Man United 4-0 in the previous meeting between both teams, but Herrera made sure the revenge mission was complete. He first set up Marcus Rashford in the seventh minute to open the scoring, before doubling the lead himself early in the second half.

The midfielder not only had a hand in both of Man United’s goals, he totally bossed that game. Having been tasked to mark Eden Hazard, Herrera completely ‘pocketed’ the Belgian throughout the game. He eventually played the role of defensive midfielder, attacking midfielder, goal scorer and assister – all in one game. 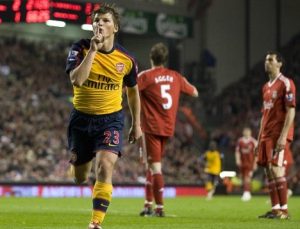 Arsenal fans are usually divided when the name Andrey Arshavin is mentioned. The Russian is one of those footballers whose statuses are thorn in between good and great. He had some frustrating spells at the Emirates but he put up one of his most memorable performances against Liverpool in April 2009.

Having joined the Gunners from Zenith St. Petersburg, Arshavin was struggling to adapt to his new club. However, a visit to Anfield quickly changed everything. In an extraordinary game of football, the Russian completely stole the show by scoring all four goals for Arsenal as the match ended 4-4.

Forget the fact that Fernando Torres and Yossi Benayoun also scored doubles each, Arshavin’s four goals ensured he overshadowed every other player on the pitch that day. His first three goals came within 70 minutes and, with Arsenal down 4-3 at the 90th minute, he added his fourth goal to draw the Gunners level. It remains one of the most impeccable performances seen by any player in the Premier League. 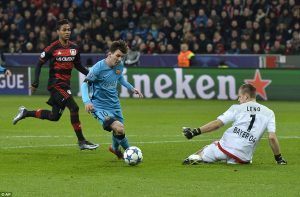 The pedigree of Lionel Messi is known by all and it is easy to see why many regard him as the greatest footballer of all time. The Argentine has set and broken numerous records in his career and continues to get better with each passing year.

Messi has destroyed many teams with his brilliance and genius but his performance against Bayer Leverkusen in the Champions League in 2012 stands out among them all. The Barcelona star netted five times as the Catalans totally annihilated their German opponents by seven goals to one.

By so doing, Messi became the first player to score five goals in a single Champions League match. The 31-year-old has since delivered many memorable performances in his career, however, none was so domineering as his destruction of Bayer Leverkusen seven years ago. 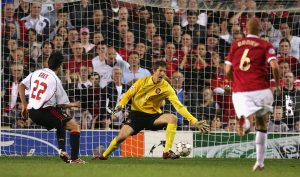 It is usually difficult to pick out a man-of-the-match when two forwards from opposing teams score match each other in terms of goals. That was the case when Manchester United hosted AC Milan in the first-leg of the 2006/07 UEFA Champions League semi-final.

The Red Devils won that game 3-2, with Ricardo Kaka and Wayne Rooney both netting doubles. However, there was to be no debate over who the star of the show was. It was definitely not Rooney. Although AC Milan lost the game, Kaka’s name was on everyone’s lip once the referee blew his final whistle.

The Brazilian’s first goal was sublime, but his second was what confirmed his status as a football great. Kaka chased after a long ball and shoved Gabriel Heinze off it. He then headed it in between the Argentine and Patrice Evra, causing the two Man United defenders to crash into each other. Kaka then took the ball and calmly drilled a low curling shot past the onrushing Edwin Van der Sar.

Throughout the game, Kaka tormented the Man United defence and deservedly received a standing ovation from the Old Trafford crowd after the final whistle. 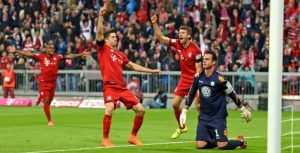 Very few strikers in world can compare themselves to Robert Lewandowski when it comes to goal scoring exploits. The Poland international boasts some insane numbers in front of goal and has taken his scoring to greater heights since moving to Bayern Munich.

In one of his best performances for the German giants, the striker totally destroyed Wolfsburg by scoring five goals. His performance becomes even more special when you consider the fact that he came on as second half substitute and scored all five goals within the space of just nine minutes.

Lewandowski netted his first goal of the night in the 51st minute and added four more before the 60th minute. Such domination of a game by a single player is rare in football and the Polish forward deservedly entered his name in the Bundesliga history books for that feat. 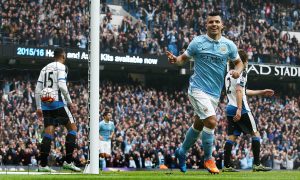 Since moving to England, Sergio Aguero has done nothing but vow fans with his lethal finishes. The Argentine is one of the greatest strikers ever to play in the Premier League and his stats are evidence of his greatness.

For a man who has been at Manchester City for more than seven years now, there are so many of his magical performances one can point to. However, none really sets him apart than his five-goal performance against Newcastle United in the 2014/15 Premier League season.

Aguero grabbed all the headlines after scoring five times against the Magpies before the 50th minute of the game. Rather lethally, the striker achieved this with just nine touches of the ball. In fact, Aguero could have gone on to add more goals had he not be substituted in the 50th minute by then City manager Manuel Pellegrini. 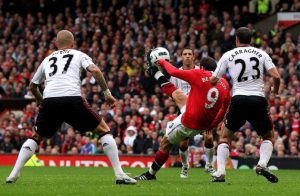 As far as games where one player alone demolished the opposition are concerned, Dimitar Berbatov cannot be ignored. The Bulgarian striker is a Premier League legend, having starred for both Tottenham Hotspur and Manchester United.

The striker scored many memorable goals in this period but his performance against Liverpool in 2010 tops all. Berbatov scored all three goals as Sir Alex Ferguson’s side recorded a hard-fought 3-2 win over their bitter rivals at Old Trafford.

The striker put Man United into a two-goal lead in the first half but Steven Gerrard equally responded with a double of his own for the Reds. With the game heading for a draw, Berbatov once again stepped up to win it with a well-taken overhead kick. Very few players can claim to have rattled Liverpool this way, but the Bulgarian surely made his mark in this game by totally owning it. 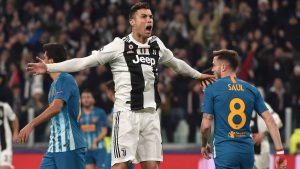 Talk about goal machines in world football and Cristiano Ronaldo’s name will feature heavily among the top three. The Portuguese has scored goals for fun throughout his career and is still delivering the goods at Juventus.

In terms of hat-tricks, too, Ronaldo has scored quite a number of them and currently stands as the player with the joint most hat-tricks in both La Liga and the UEFA Champions League – he holds both records with eternal rival Lionel Messi.

And, in truth, the Portuguese has played in many memorable games in his career but his most recent virtuoso performance came against Atletico Madrid in the UEFA Champions League. Having lost 2-0 in the first-leg of the last 16 game, the 34-year-old scored all three goals as Juve overturned the scoreline to advance to the quarter-final. It was a totally dominant performance from a player with nothing at all to prove. 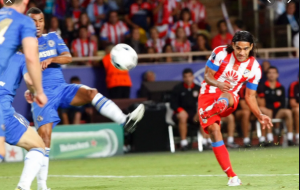 Radamel Falcao may currently be past his best, but at a point he was the best striker in the world. That was during his days with Atletico Madrid. The Colombia international was part of the Atletico Madrid side that dominated the Europa League under Diego Simeone.

In 2012, the Rojiblancos had won the Europa League and were therefore set to take on Chelsea in the UEFA Super Cup, with the latter having also emerged winners of the Champions League. The game turned out to be the Falcao show, with the striker completely destroying the Blues alone.

The Colombia captain scored a hat-trick as Atletico won the game 4-1. Falcao opened the scoring after just six minutes, added a second in the 19th minute and then completed his hat-trick in the 45th minute. Very few players have since managed to dominate a final in that manner. 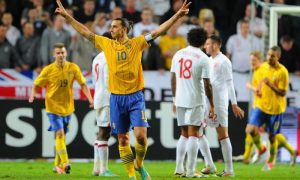 The enigmatic character of Zlatan Ibrahimovic seems to have served him well throughout his career and, whether one likes him or not, the big Swede has always walked the talk. He might come across as arrogant, but his baggage takes nothing away from his greatness as a footballer.

And in November 2012, he remembered everyone of his greatness when he single handedly dismantled England in an international friendly. Ibrahimovic scored all four goals as Sweden played out an entertaining 4-4 draw with the Three Lions at Wembley.

Although his goals were not enough to win the game, his performance was unmatched and, one of his goals – a bicycle kick all the way from the centre of the pitch – stands out as one the greatest strikes ever seen in football. That night was all about Zlatan and it sits up there with the most memorable performances ever witnessed at the iconic Wembley stadium.