The 10 best UEFA Champions League Finals of all time 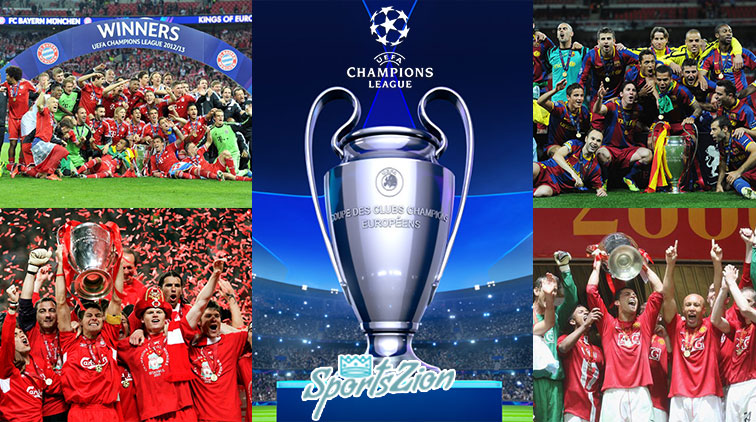 Throughout history, there were many UEFA finals that remained in the memory of fans. Few competitions are as intense as a UEFA Champions League. The best teams in Europe are measured in a highly matched competition that leaves these best UEFA finals in the history of this tournament.

The tension experienced in these matches is very high. Each team that qualifies for this competition is faced with the best teams in Europe. Thanks to this, you can see matches between players like Ronaldo, Messi or Neymar.

As the competition progresses, the level of play improves. This continues until the grand finale. At that time, the two best teams in the competition are measured in a face-to-face duel that will leave one with maximum glory, and another in failure.

Many finals have been played in history. However, these are the 10 best UEFA finals that left in the memory of the public for his intensity. 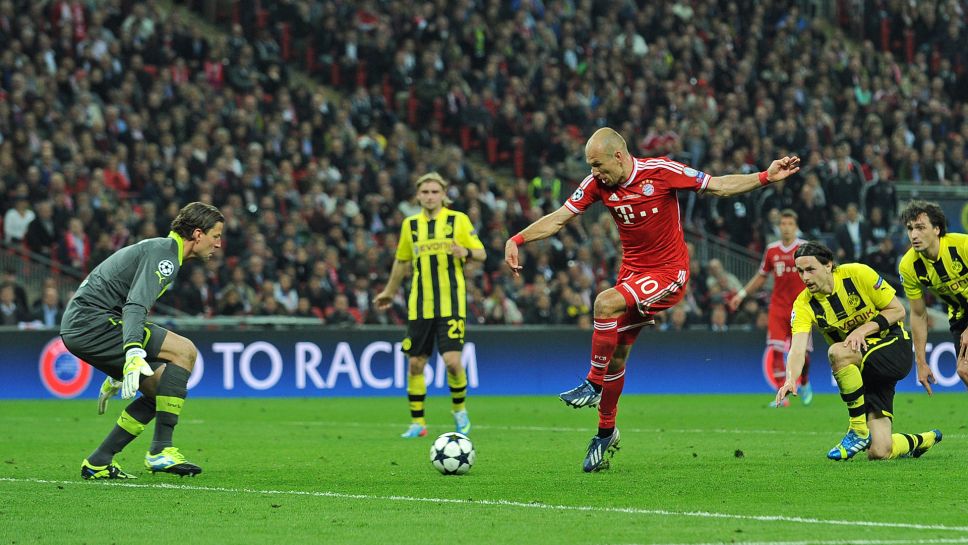 The two teams that were faced make it clear why this was one of the most important UEFA finals in history. Two of the best teams in Germany reached the final of this competition. His level of play was extremely equal and both teams were in an excellent moment.

In the final of 2013, it would be defined who was the best team in Germany. One of them stayed with the maximum glory, and the other finished in second place. This game is still remembered in Germany today because the entire population was paralyzed in front of the televisions.

Both came to the final eliminating the best teams in the world. Borussia beat Real Madrid in the semifinal and Bayern crushed Barcelona 7-0. The public’s expectation was immense.

With an extremely close final the great Bayern Munich team managed to prevail 2-1. Bayern started winning the match. However, after 8 minutes Borussia tied it for a penalty goal. On the end of the match, Bayern scored an agonizing goal that gave him the victory. 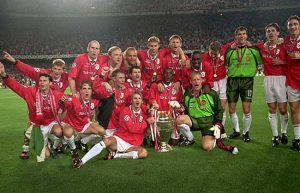 Who could forget the miracle at Camp Nou? Red Devils fans can’t forget this incredible final. One of the most intense matches in UEFA’s history was the one between these two giant teams.

On May 26, 1999, there would be one of the best UEFA finals in history. With a match that seemed to have a clear winner, there was a totally adverse result than expected. All Bayern fans were ready to shout the championship, but Manchester ruined the celebration.

In a game that had Bayern as a clear dominator, what seemed impossible happened. Bayern started winning the match comfortably 1-0. When everything seemed finished, Sheringham scored an agonized draw in the 91st minute.

As if this were not enough, two minutes later on the verge of the game ending Manchester score another goal. Solskjaer was the great savior of the Red Devils who turned the result and stayed with their second UEFA Champions League. 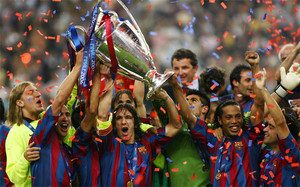 A very similar situation occurred in this final. When everything seemed lost to FC Barcelona, ​​the impossible came true. Barca fans have a beautiful memory of the UEFA Champions League final in 2006.

In a tight confrontation, Barca measured himself against Arsenal. The luck of the English team was not favorable. At 18 minutes of the first half they received a red card that left them with one less man on the field.

However, Arsenal managed to make a goal that put them high on the scoreboard. After this goal, they started  defending the constant attacks that Barcelona carried out. About the last minutes of the game and when everything seemed irremovable Barca became stronger than ever.

Larsson entered for the cule team and gave two vital assists so that Barca could achieve victory. In one of the most interesting UEFA Champions League finals, the Spanish team turned the result and took the cup for 2-1. 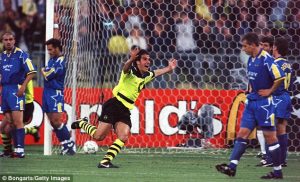 Borussia celebrating one of his goal

The 1997 final was one of the most surprising in history. All fans of this sport were greatly surprised to see the result of the game. No one could believe the feat that the German team had achieved.

It was the second UEFA Champions League that the German team played. On the other hand, Juventus arrived at his best football moment with an excellent team. Everyone saw Juventus’ victory as something simple, but the Germans were not going to make it so easy.

No one in the public could believe what was happening on the field. Borussia Dortmund had planted themselves in the field and was teaching good play. Juventus had no chance of dominating the ball.

The result was overwhelming, Dortmund started winning 2-0. After the impact, Juventus scored a goal that served little. Finally, the Germans won for 3-1 match in one of the most entertaining UEFA finals in history.

An overwhelming final that left a pleasant surprise was the one of 2011. The Guardiola team faced Fergusson’s team in a final that faced two of the best football managers in that moment.

The match had a strong surprise for Barcelona. A young player of only 24 years took the game forward becoming a key piece in one of the most important UEFA finals in football history. This player was the Argentine Messi, who was the great revelation of this competition.

Messi was responsible for making all the plays on offense. Manchester United could not do anything to stop the Argentine forward. Barcelona took advantage of the good level of Messi and began to create a lot of plays that gave them the 3-1 victory. 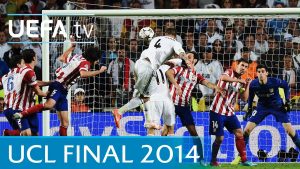 One of the Madrid’s goal

This Madrid derby paralyzed the entire world in a vibrant match. Real Madrid wanted to win their tenth UEFA Champions League while Atlético Madrid had won La Liga and wanted to get UEFA cup as well.

The result is already known by many since this final was the most important in Spanish football. Atletico began winning the match with a goal from Godín. However, the result became unsustainable and the Real’s good game appeared.

Nothing could do Atlético Madrid against his opponent. Real began to dominate the game and turned the result to 4-1. This overwhelming defeat left the tenth cup to Real and the maximum misfortune to Atlético in one of the most entertaining UEFA Champions League finals. 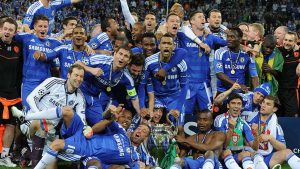 Chelsea team during the final

If we talk about surprises this was one of them. In one of the best UEFA finals ever, two of the most important temas were faced, the English team Chelsea and, again, the best team in Germany. Bayern was the favourite winner to the championship with a forward formed by Robben and Ribery that terrified the rival defenses.

After an extremely close match, Bayern broke the score on the end of the match. In minute 83 ’Müller put the 1-0 that seemed final. However, the story would not end there as Chelsea came out with everything for the draw.

Didier Drogba achieved the English feat by marking the tie at the last minute of the match. Bayern Munich fans could not believe what happened. Finally, there was a penalty shootout in which Chelsea won 4-3 crowning champion of the 2012 UEFA Champions League. 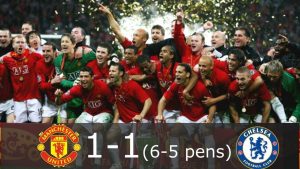 Again we have two very named teams in this ranking. It seems that these two English teams are doomed to give extremely close finals in this competition. However, this was an extremely equal final.

With two of the best English football teams in the last match, it was known that this was going to be a tied final. However, nobody thought the game was going to be so exciting. The intrigue was taken to the last moment.

In the 90 minutes of the match a winner could not be defined. The game was extremely entertaining with attacks by both sectors that left a 1-1 match. On penalties, the Red Devils managed to get the victory in a long round that ended in 6-5 in favor of Manchester. The 2008 final was one of the most remembered best UEFA finals. 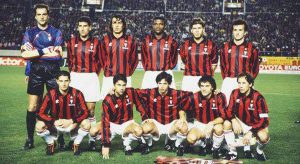 Few have seen a final as intense as the one of 1994. Two of the best teams of the moment reached one of the best UEFA finals in the history of this sport. No one could believe the quality of players who were facing each other on the field.

AC Milan was hit hard to this final. With one of the best teams in the world, Milan had 7 fundamental losses in his initial lineup. Many thoughts that this would cost them the game, but it was clear that good game went beyond players.

The defense of the Spanish team could not do anything to the constant attacks of the Italian team. After a game in which AC Milan constantly dominated, they managed to take a crushing 4-0 victory that happened to the history of Italian football. 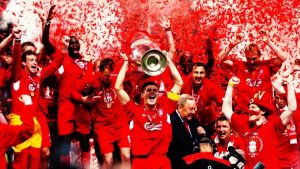 Liverpool celebrating with the trophy

No one in the world of football can say that this was not the best final in history. A miracle happened in Istanbul that left one team in glory and another in ruin. During the match played in 2005, there was an authentic demonstration that no match would finished until the referee says so.

Everything seemed lost to Liverpool who was losing 3-0. They were paralyzed in attack. Because of this, they could not find a way to defend the Italian attacks. However, the appearance of one of its best players was essential for the miracle.

Gerrard began to inspire his teammates. After several talks and indications that this Midfielder gave to the players, Liverpool started playing as if it were the best team in history.

After a long journey, they achieved the miracle. The match was tied 3-3 and defined in the 12 steps. In a round of penalties that had England paralyzed the English won by 3-2 consecrating the championship.

These are the 10 best UEFA finals in history. Because of the intense finals of this competition, a lot of fans can remember other great endings that could be in this ranking, but nobody disputes that this finals did not deserve their position. Although football has given us many great finals, Liverpool in 2005 stands out above the rest for the great comeback they presented consecrating a deserved championship.