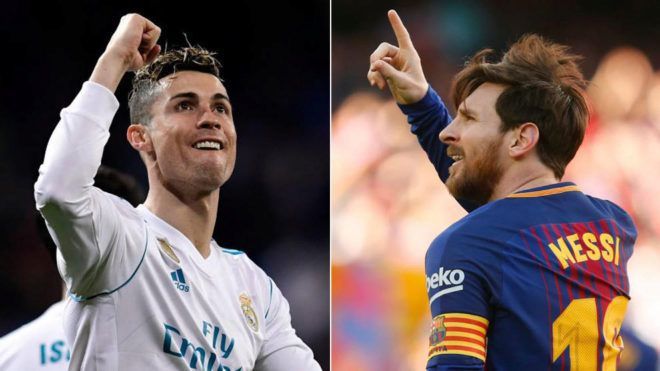 It is always the desire of football fans to watch the top figures in the sport facing-off in highly competitive and entertaining matches. The prospect of seeing some of the greatest attackers, defenders, and midfielders in the world all stepping onto the pitch at the same to start-off an epic battle is one that pleases every lover of the game.

While this kind of match is hard to come by as a result of many reasons, there is a special fixture that always delivers it every year – the El-Classico; every match between Spain’s bitter rivals, Barcelona and Real Madrid. The world’s biggest football fixture has presented us with many world-class players squaring it off on the pitch over the years. From unstoppable attackers to unbelievable midfielders and unbeatable defenders, it has offered us all.

As we all know, attackers always take the most attention. Their goalscoring exploits continue to reverberate whenever the greatest in the game are being mentioned. In line with that, the El-Classico has also witnessed a lot of fantastic attackers whose efforts in front of goal have entered the history books. Below, we present you the top 10 scorers in the history of this great fixture:

There are a few players who managed to play for both Clasico rivals, Barcelona and Real Madrid and will always be remembered in history. Hugo Sanchez is one man who couldn’t do that but still managed to pull a similar act by representing two city rivals, Real Madrid and Atletico Madrid.

However, his stint at Atletico didn’t bring him here on this list; rather, he is featured here courtesy of his exploits with Real, especially during the El-Classico games. Hugo Sanchez joined Los Blancos in 1985 and helped the club to claim five successive La Liga titles, picking up 4 Pichichi trophies along the way.

He also made his impact felt in Spain’s biggest fixture by finding the back of the net an impressive 10 times during matches against FC Barcelona. He cemented his place among the most prolific goalscorers in El Clasico history.

The first Barcelona superstar on this list and the first one with an active playing career, Uruguayan striker, Luis Suarez has quickly written his name among the all-time greats of the El-Clasico since he switched from Liverpool to Barca in 2014 – courtesy of his brilliant goalscoring exploits in the coveted fixture.

The attacker is currently enjoying a prolific run in Spain’s biggest fixture. He scored a fantastic hat-trick to demolish Real Madrid in the first leg of their La Liga encounter last season before firing another one in as the two sides clashed again at the second phase of the term.

Suarez currently has 11 El-Classico goals to his name, with 9 of those goals coming from the La Liga and the remaining two scored in the Copa del Rey. Still active in the fixture, the Uruguayan still has the opportunity to climb higher in the rankings.

Carlos Alonso Gonzalez, who is also known as Santillana was a highly talented striker who played for Real Madrid for the largest part of his football career. He spent a whopping 12 seasons at the Estadio Santiago Bernabeu where he added a whopping 9 La La Liga titles to his cabinet.

Besides enjoying a very successful career at the club winning plenty of trophies, Santillana also managed to put himself among the greatest attackers to take part in the El-Classico by recording an impressive 12 goals to his name in the prestigious fixture – all scored for Real Madrid.

Out of 12 El-Classico goals, 9 came were scored in the La Liga and the rest came from meetings between the two giant clubs during domestic cup competition meetings. Unfortunately, despite scoring 352 goals for los Blancos, he failed to win the Pichichi trophy in his career.​

This is a well-known name in the beautiful game. Ferenc Puskas didn’t just cement his place among the all-time best Real Madrid players, he also has a claim to be one of the greatest superstars to kick a ball. Another feather in his cap – he is also one of the most prolific goalscorers in the history of the El-Classico.

When it comes to goalscoring, the attacker was a poet. The way he finished off chances in fantastic fashion; albeit effortlessly will remain in the memories of football fans who were lucky to see him pull a pair of boots and take to the pitch. Puskas scored a mind-boggling 374 goals in 352 games for Real Madrid, with 14 of those goals coming up against FC Barcelona.

He led Los Blancos to claim three European Cups during his stint at Santiago Bernabeu alongside several trophies at the domestic level. The famous Puskas award is named after him.

Real Madrid players dominate the early section of this list and deservedly so. Francisco Gento is another Los Blancos player who cemented his place in the all-time list of the top goalscorers in El-Clasico history.

The former attacker holds the record for the most appearances in the great fixture, having stepped onto the pitch a whopping 44 times for Los Merengues against Barcelona. He was able to make those appearances count by recording 14 goals to his name.

However, his goals weren’t the only thing that makes the player a legend; he did a lot more for the club than scoring goals. He was a reliable figure at Santiago Bernabeu and was always a player to count on whenever the peak moments arrived.

The first Barcelona player on the list, also another one of three legends who have 14 El-Clasico goals to their names, Cesar Rodriguez was a very prolific attacker for the Catalan giants during his days at camp Nou. He played across three decades for the club and managed to notch over 300 appearances.

Cesar Rodriguez won 5 La Liga titles in Catalonia and he remains one of the most prolific finishers in Barca history, with an amazing 232 goals to his name. Following the end of a very successful playing career, he returned to manage Los Blaugrana.

The former attacker achieved a similar feat to the likes of Pep Guardiola, Luis Enrique, Johan Cruyff, and Ernesto Valverde – all big-names who defended the Barca colors both as players and as managers. He will be remembered for long at Camp Nou.

Raul was a well-known footballer during his playing days in the Spanish top division. Recognized by many as the greatest Real Madrid legend based on opinion, his incredible abilities helped to keep Los Blancos on top of the game for many years.

Raul could bamboozle his way through multiple opponents and penetrate straight into the opposition box in the blink of an eye. He enjoyed a successful career at the top of the game during his time at Santiago Bernabeu, although he later left represent Bayer Leverkusen during the twilight of his career. However, his brightest days are the ones he spent at the Santiago Bernabeu, with a couple of notable achievements to his name.

Raul spent the largest part of his playing career in the Spanish capital where he represented Los Blancos in a record 741 appearances while finding the back of the net on 323 occasions. Great to learn, 15 of his goals came up in the El Classico.

The Portuguese attacker is tied with Argentine legend Alfredo Di Stefano at 18 goals but he’s behind the “Blond Arrow” due to his number of goals lower than that of his counterpart in the domestic league – which is a rating system adopted whenever a tie occurs between two players in the fixture.

He scored a whopping 451 goals for the Spanish giants from 438 matches, with an unbelievable goal ratio of 1.03 goal(s) per game. Ronaldo eventually left the Santiago Bernabeu for Juventus in the summer of 2018 but he will always be remembered as one of the greatest players to wear the white jersey of the Galacticos.

One of the greatest footballers in history, Argentine legend, Alfredo Di Stéfano needs no introduction. With players like Pele, Eusebio and John Charles rating him as ‘the most complete footballer’ they have ever seen in their lives, there’s simply no debating.

The attacker, whom many believe to be the greatest Real Madrid player of all-time, enjoyed a very successful stint the Santiago Bernabeu. Di Stefano won an amazing eighteen trophies in eleven seasons and also recorded 308 official goals to his name.

He held the position of the all-time scorer in the El-Classico for several years before Barcelona’s Lionel Messi stepped up to overcome him just recently. He was recently lauded as the greatest player in history by Diego Maradona.

Arguably the greatest player the football world has witnessed, Argentine maestro Lionel Messi has cumulatively scored the highest number of goals in El-Clasico history. The finest superstars in the world are often praised for rising to the occasion on the grandest stages and the Barcelona talisman has time and again proven his worth to the game.

Scoring a massive 26 goals in the world’s biggest feature is no mean feat. Messi recorded his goals in different competitions; the lion’s share coming in La Liga (18), he scored 6 in the Super Cup and the remaining 2 in the Champions League.

Being one of the few active players on this list and still plying his trade in Catalonia, the Argentine still has the chance to pull even further away from his competitors on this list. We can be safe to assume that he will not be caught by anyone anytime soon.