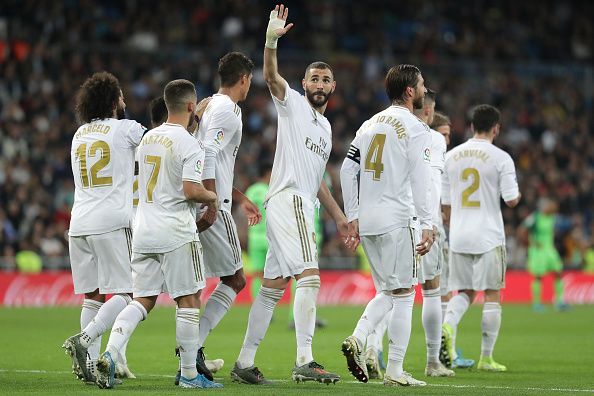 Football has become much more than just a game. It has become more of a business entity now than ever. Football fans all around the world hold their favorite football stars in high esteem, such that they can do the unthinkable to see their stars in action. This, in the long run, has boosted the economic values of the teams.

That being said, a lot of teams have had their revenue generation boosted by the acquisition of some of these football icons, while some other ones have their income generation boosted by winning major trophies over and over again. Generally, income generated by teams are either from gate receipts, shirt sales, or monetary gifts from winning trophies, and money generated from viewing rights.

Some teams have their worth dented due to their continued absence from major competitions, while some see their worth diminished from fans boycotting their home games. All in all, the top 10 football clubs that are worth the most in world football are listed below:

This team has its worth boosted by the acquisition of arguably the best footballer on the planet, Cristiano Ronaldo. This deal made them had a massive boost in their shirt sales and gate receipt. Who wouldn’t want to pay to see the world’s most famous football player in action?

They are worth $1.512 billion, rising from the $1.472 billion and $1.258 billion that they were worth in 2018 and 2017 respectively. Juventus remain the richest club in Serie A and they are the only Italian club to feature on this list.

Surely, they would worth much more if they were able to achieve their greatest desire of winning the UEFA Champions League trophy, but at the moment, they are in number 10 in the football club rich list. Let’s hope they could win the much-desired tournament and get a boost soon.

This team was previously number 10 in the football rich list in 2018 and 17, but their exploits in the UEFA Champions League last season – getting to the final of the competitionhttps://www.sportszion.com/top-10-emotional-moments-in-football/ – has seen them have a massive boost in their cash revenue, thereby raising their net worth.

They are worth $1.624 billion, a massive increase from their $1.237 worth the previous year. Having success in major football competitions always boost earnings and worth of football clubs and Tottenham will be smiling for their incredible run last year.

Coupled with the fact that they have remained consistent in the league for the past four to five seasons – making the top – four during the said seasons, thereby qualifying for the Champions League consistently. They could keep moving higher.

At number 8 is the champion of Europe, Liverpool. Their exploits in the Champions League last time out have not really had a significant impact on their worth at the moment – with regards to positioning – as they remain in the same spot they were the year before.

Even if it doesn’t have an impact on their position on the football club rich list right now, it does have some impacts in their monetary value, as they moved from $1.944 billion to $2.183 billion- all in the space of one year.

It appears the long time away from the UEFA Champions League is finally taking a toll on the worth of the North London club, as they plummeted from 6th and are now at 7th, and it won’t be long before they go beyond that level if they continue to be absent from the world’s most prestigious club competition.

Although they might have gone down in terms of place on the rich list, it appears they were still almost on the same spot in terms of money value. They were worth $2.238 billion previously and presently stand at $2.268 billion.

It appears their consistency in the Champions League in the past had raked in a lot of cash for them, so much that they can’t be displaced easily. Then, the fact that they got to the final of the Europa League last season added to their advantage. Nevertheless, they need to get back as soon as possible.

This is the fourth continuous England team on the list, proving the fact that England is the most lucrative league in the world. Chelsea was previously behind Arsenal in the pecking order in the rich list, but the significance of European tournaments and presence has come to play in their overtaking of their London rivals.

The Blues tortured their neighbors the last time out, thrashing them 4 – 1 to land their second Europa League trophy, and their third European trophy in the club’s history. This appears to be telling in their net worth, as they leapfrogged their London rivals in the rich list.

Chelsea is said to be worth $2.576 billion, a significant rise from their $2.062 worth the previous year. This is possibly going to increase, as the Blues qualified for the Champions League this season, and appear to be in the running for the Premier League title.

We continue the list with another Premier League team – Manchester City. This is one of the most consistent English teams at the moment. They have been consistent in the domestic league for the past two seasons, landing the two titles in the two years in review.

Although they have not won the Champions League yet, they were consistent enough – getting to the quarter-finals in their last two seasons in the competition, to see a massive boost in their net worth. They are worth $2.688 billion at present, compared to their $2.474 from last season.

If they are able to make history by winning the Champions League (which will not be a tall tale judging by the team’s consistency at present), then, their worth is going to be skyrocketed. will they be able to go all the way? Well, let’s wait and see.

This is one of the teams whose fortunes appear to be taking a downhill turn, as they worth less than they were worth a year ago. That is to prove that not getting the most coveted trophy for your fans is definitely going to take a toll on your revenue in football, and in the long run, your worth.

Even at that, they have continued to remain consistently in the fourth position on the rich list, and it will be a while before they are knocked off (except maybe by some great fortune). Their net worth stands at $3.024 billion, a decrease from their last year’s worth of $3.063 billion.

Possibly, the departure of their most formidable wing duo, Arjen Robben and Franck Ribery, popularly called ‘Robbery’, and their continued under-achievement in the Champions League in recent years, might be the reason behind the downturn.

The richest football club in England, and in the world a year ago. The possibility of “no European football” may be the reason behind the downturn.

Last year, having finished in second place behind their “noisy neighbors”, in the Premier League the year before, they were guaranteed a place in the Champions League for that season, and they were able to get to the quarter-finals, dumping Paris Saint Germaine out of the competition along the way, that made their fortune to be boosted.

But this time around, they finished sixth, almost out of the European places, and their performance in the league does not appear to be getting any better, thereby they dropped from first in the rich list to the third position. Their net worth stands at $3.808 billion, a very significant decrease from their previous worth of $4.123 billion, which puts them on top of the rich list a year ago.

Knowing the Glazier – owned club quite well, it is safe to believe they will soon rise to the top of the list, but they have to improve their performances on the pitch first, else, we might be looking at a long time away from the top of the rich list.

On the second spot of the list stands FC Barcelona. The Spanish giants were able to trade places with their arch-rival, Real Madrid, on the rich list. They moved ahead of English biggest team, United, but were not able to get over their next-door rival, Real Madrid.

Despite the fact that they went further than Madrid in the European tournament last time out, and also won the Spanish La Liga title, they are still unable to leapfrog them in the ranking of the top richest football clubs in the world at the moment.

Perhaps, if they are able to clinch the Champions League trophy this season, they might be able to, but at present, their net worth stands at $4.021 billion, a significant rise from the previous $3.700 billion that put them in third position the previous year.

This is the richest club in the world in 2019. The previous back – to – back Champions League success that they’ve had could be the reason they get ahead of the English Club, United, while waving away challenges from their La Liga rival, Barcelona.

They are said to be worth a whopping $4.239 billion, an increase from the previous $4.088 billion that put them at second place behind Manchester United a year ago. How long will they remain the richest club in the football world?