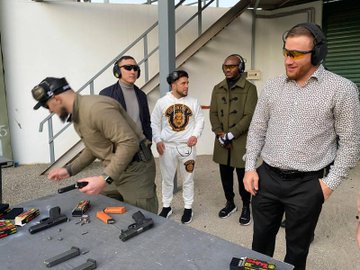 Ramzan Kadyrov is known for his semi-autonomous rule in the Republic of Chechnya and his friendship with the Russian president, Vladimir Putin; he is also playing an essential role in the Russia-Ukraine war.

Former UFC champs Kamaru Usman and Henry Cejudo, along with Justin Gaethje, are all currently in Chechnya at the invitation of the republic's warlord Ramzan Kadyrov.

Here they are testing out guns at a special forces facility in Gudermes. pic.twitter.com/lJIm8kBHRS

The recent additions to that invitation list were Kamaru Usman, Henry Cejudo, and Justin Gaethje. For Usman, it is his third visit to Chechnya; he even attended a private party on Kadyrov’s son’s birthday, while for the other two, it was the first time.

Kadyrov’s authoritarianism has earned him a bad reputation, so he opened a mixed-martial-arts (MMA) fight club, where he gets along with the fighters and encourages them to visit Chechnya.

One picture drew the attention of the world to the fact that the three fighters were practicing shooting at the Russian Special Forces University in Chechnya with Ramzan Kadyrov amidst the Russian-Ukrainian war.

But the U.S. The Department of the Treasury has firmly restrained every businessman from interacting with several Russian companies. The Treasury deemed that sanctioning Kadyrov’s MMA club would teach the dictator a lesson for violating human rights.

So, it is clear that the visit of these three UFC superstars will not be welcomed by the U.S. government, as it is clear that they have violated U.S. sanctions. American fans are upset about this visit. They have powerfully written against it on their social media handles. One fan wrote:
“That’s just absolutely vile. I can tolerate Chimaev’s relationship with Kadyrov because he appears to be in a hole he can’t get out of. But for American athletes to embrace this is a disgrace.”

That's just absolutely vile. I can tolerate Chimaev's relationship with Kadyrov because he appears to be in a hole he can't get out of. But for American athletes to embrace this is a disgrace.