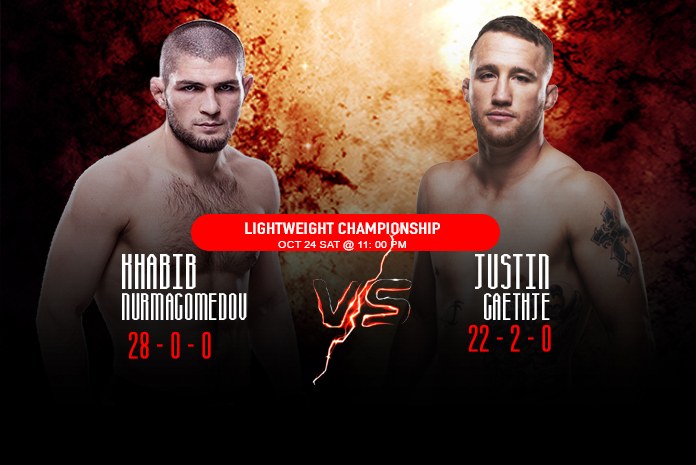 The wait is almost over for the Khabib vs Gaethje UFC 254 battle. Champion Khabib Nurmagomedov facing the interim champion Justin Gaethje is for sure going to be one of the most intense UFC fights of the year.

Khabib is unbeaten so far in 28 career battles, and he must be looking for the win on this UFC 254. As Khabib announced that, he wants to go into retirement with 30-0 unbeaten records. To keep his words, he will be massive tonight. On the other hand, he is also willing to fight McGregor so that it will be a showdown for Conor McGregor.

We have never seen Khabib’s defeat. So, it is difficult to say how to defeat the Eagle, and we cannot imagine in our dream. However, Gaethje better does his homework before entering the octagon.

On the other hand, we have seen how Khabib defeated one of the best fighter Conor McGregor! So, among the current UFC players, if anyone wins over Khabib, only Gaethje can do it. The best plus point for Gaethje is his lack of care for his own damage. This means, despite the damage, he has the ability to fight back hard, and he can do it against Khabib too. Besides, Gaethje’s amateur wrestling background will also provide the advantage of taking Khabib down.

Here, I just gave the facts on Justin Gaethje.

However, in this battle, Khabib is a favorite by all. It is because of his past fights. The toughness he showed in the last 28 fights deserved a bow. Whether he defends his shots or take him down, Khabib always finds a way to win. Besides, Khabib has a weak point, which is he never supports wrestle as it makes him tired. So, today’s opponent, amateur wrestler Gaethje can take this benefit. That should be the only concern for Khabib as it is a 5 round fight, and there is plenty of time to make Khabib tired. But Khabib can wrestle if he has no choice. Before that, Gaethje has to fights hard in the early rounds. But, if the fight runs longer without any kind of wrestle, I can see an absolute win for Khabib Nurmagomedov. However, to stay in the fight, Gaethje has to avoid Khabib’s pushing against the case.

Khabib’s fans are going to see a worthy opponent. Let’ cheer them both for the Khabib vs Gaethje UFC 254 Fight.

It was an easy win for Khabib. Although Justin Gaethje had a good game plan, unfortunately, it did not work out as it was not good enough to beat the unbeaten fighter. Khabib won the battle with a submission in the second round.

Gaethje’s strategy was to land some solid kicks to Khabib’s leg. However, he did land some kicks, and Khabib was damaged too.

But in the second round, after a leg kick from Gaethje, Khabib drove quickly and locked the opponent with a triangle choke, and Gaethje tapped out. It finished at 1:34 in round 2.

Khabib just battled his last fight. He announced his retirement. Khabib Nurmagomedov stated that he doesn’t want to return to the Octagon without his father. This will not be possible anymore as his father died earlier this year due to COVID-19.