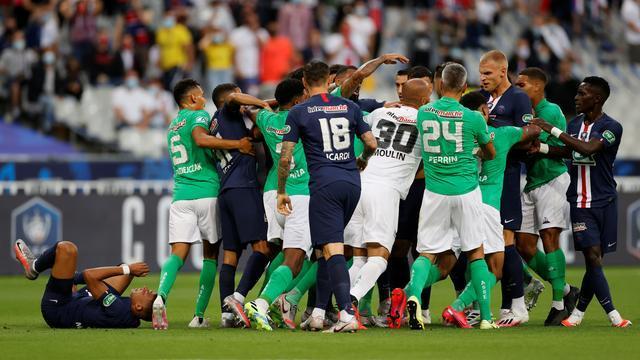 The Coupe De France Final could be an ideal preparation for Paris Saint-Germain to face Atalanta in their upcoming Champions League match. They won the match with the 1-0 scoreline & won the trophy. But the present French champion found one of their star players Kylian Mbappe subbed off earlier in the game against Saint-Etienne due to an unexpected injury.

Etienne’s veteran captain Loic Perrin attempted a harsh tackle on Mbappe in the 26th minute of the match. Perrin’s mistimed tackled caused an ankle injury for Mbappe. That horrendous foul handed Perrin a yellow card which was converted to a red card after checking in VAR. Mbappe received some treatment by the physio instantly but couldn’t continue further. Instead, he had to limp out of the ground.

However, the incident created a massive brawl among the players of both teams. The referee brought out cards from his pocket multiple times as he showed yellow card to six different players for getting involved in the fight.

“There was no intention to hurt him. The intention was to play the ball.”

He also expects Mbappe’s speedy recovery to get ready for their crucial UCL clash against Atalanta.