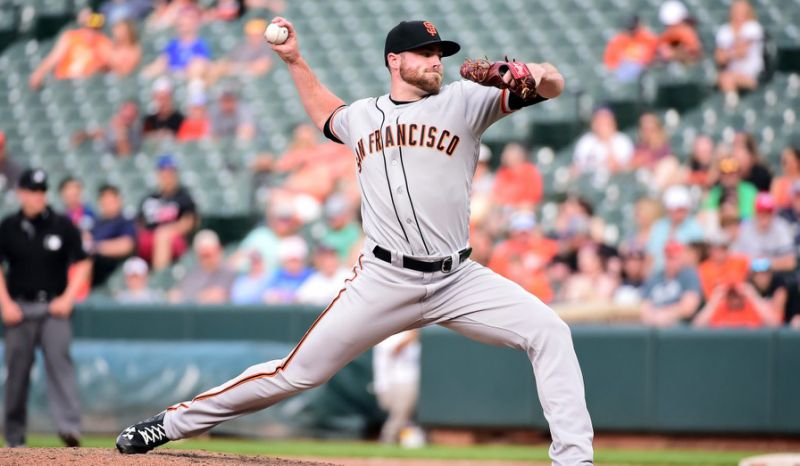 Amidst the raging movement of Black Lives Matter and equality for all life forms, each sport has decided to contribute to the cause as far as possible. Players have decided to take a knee during the national anthem and jerseys have been donning the initials BLM. However, Giants’ relief pitcher Sam Coonrod has different opinions. MLB had also tweeted in regard to the following BLM movement.

Today, and every day, we come together as brothers. As equals, all with the same goal – to level the playing field. To change the injustices. Equality is not just a word. It’s our right!

Today we stand as men from 25 nations on 6 continents.

Today, we are one. pic.twitter.com/vKUGdRfwgQ

As all the players took a knee while the Stars and Stripes echoed in an empty Giants Stadium, Sam Coonrod decided to keep standing. The ‘take a knee’ gesture adopted by many NFL as well as EPL players is in their support of the Black Lives Matter movement that is taking the US by storm.

Among the other players who kneeled was Dodgers’ Mookie Betts who recently signed on a 12-year $365 million contract with the LA Dodgers and some of his teammates.

The Giants and the Dodgers were provided a black ribbon to hold onto while they kneeled during the ceremony. When TMZ Sports questioned him in the regard, he replied’ “I’m a Christian, so I just believe that I can’t kneel before anything besides God.”

Besides his vague reasoning, he further went on to comment on the BLM movement and how he didn’t completely agree with the terms. He also remarked, “I just can’t get on board with a couple of things I’ve read about Black Lives Matter, how they lean towards Marxism,” he continued. “And … they said some negative things about the nuclear family. I just can’t get on board with that.”

On asking about the only Dodgers’ player who stood during the National Anthem, team manager Kapler didn’t express much in retaliation against the player’s decision. He was considerate and said, “The one thing that we said is we were going to let people express themselves,” Kapler added “We were going to give them the choice on whether they were going to stand, kneel or do something else. That was a personal decision for Sam.”

The players wore black lives matter t-shirts during their practice sessions and the initials, BLM was present on every kit at the Nationals- Yankees game. The initials were also imprinted on the mound at the center of the diamond.