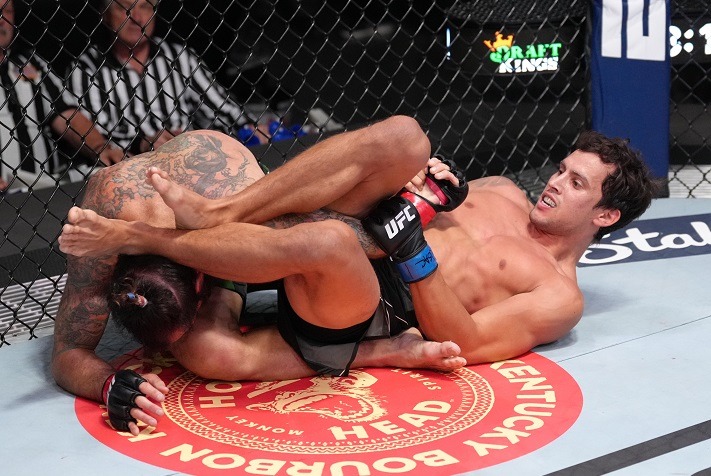 Puelles, a lightweight contender with a record of 13-2 recently submitted Clay Guida with a smooth transition kneebar. Kneebar submissions are very rare in the UFC, but Puelles has a distinct record of accomplishing three of them!

The fight ended in the very first round of the match, Guida was the one who initiated the first takedown but eventually paid a price for it as the much younger Puelles showed superior Jiu-Jitsu and ground game.

Clay Guida also has several accolades as a Jiu Jutsu specialist, but he was outmatched by “The prince of Peru” on the night.

Sterling himself is a grappling expert and has won 8 of his 24 fights via submission. He also dominated former champion, Petr Yan, on the ground in his first title defense.

Sterling tweeted this about Puelles’s submission:

Puelles’s UFC Vegas 52 win over Guida extends his current win streak to 5! He should be up there in the top 15 lightweight rankings sooner rather than later. It’s the most hyped and competitive UFC division ever.

In the post-fight interview with Daniel Cormier, Claudio spoke about how he changed his life around and moved to the US to become successful in the UFC. Puelles wants a top 15 guy next time around and feels like he is ready for it.

With Puelles on the rise and the top 15 of the lightweight division packed with elite fighters, his journey for the “Prince of Peru” through the UFC is only about to truly begin!