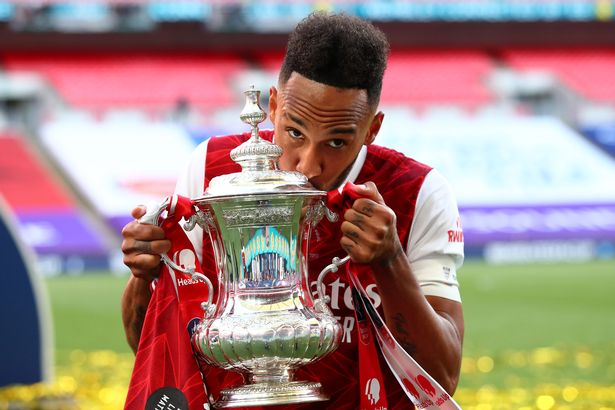 This is no surprise that Arsenal have offered a new deal to their captain Pierre-Emerick Aubameyang. The Gabonese striker has been in sublime form during their FA Cup semifinal and final, scoring braces in both games.

Since arriving from Borrusia Dortmund in the 2018 winter transfer, Aubameyang has netted 77 goals in 120 matches only. His excellent goal-scoring form helped him win the Golden Boot of 2018-19 Premier League season as well.

No doubt, Arsenal manager Mikel Arteta would love to tie his main man with a much-improved deal. The 31-year-old has been linked to replace the Barcelona striker Luis Suarez several times. Also, other English clubs are looking for opportunities to persuade him.

Will it be enough to convince Aubameyang to stay at #AFC?https://t.co/w4AHN1BlUJ

“I think he wants to stay and it is just about getting the deal done,” said Arteta. “He is loved by everybody at the club. Hopefully he can continue with us.” Arteta told after the FA Cup triumph.

Since the forward will see his current contract expiring next June, Arsenal would rebuild their squad for the next season by asking him to sign a new deal.

As per the reports suggest, the Gabon international will get his weekly wage rising from £180,000-a-week to £250,000-a-week. That means the new deal offer would cost £40million for the Gunners over three years,

The FA Cup winners are taking multiple steps to strengthen their squad. Apart from making a deal offer for Aubameyang,  they are hopeful to get Dani Ceballos another year on loan.

In addition, one of their prime targets is to bring Phillipe Coutinho from FC Barcelona on loan or with an exchange for their Frenchman Matteo Guendouzi. Atletico midfielder Thomas Partey is another option of Arsenal to boost their midfield. In that case, Arsenal have to offload their French star Mesut Ozil who didn’t play a single match since March.

Regarding the defensive options, Arsenal must reinforce to improve their overall performance. Mustafi is out of the field till October. So they are ready to receive offers for Sokratis and Rob Holding. That being the case, they will try to fill their voids by signing Diego Carlos from Sevilla or Malang Sarr who is a free agent now.

Players refuse to kneel in major leagues in regard to BLM
Man United close in on Sancho Deal, Depay as replacement