In football history, Cristiano Ronaldo has permanently established his reputation and it didn’t take long for the guy, who received his first Portugal international cap at the age of 18, and rose to the top of the footballing world.

Cristiano Ronaldo girlfriend, Georgina Rodriguez, also met her love of life in a dramatic way, and since then, the Manchester United superstar has regularly delighted his girlfriend with enormous gifts and cash.

Why did Cristiano Ronaldo girlfriend accompany CR7 on a trip to Greece?

Cristiano earned US$120 million in the previous years alone and gets paid more than US$1 million to endorse a single product on Instagram, while Forbes named him the first active team-sport athlete ever to earn over US$1 billion in lifetime earnings in 2020.

This massive earning enabled Ronaldo to buy a number of luxurious vehicles like Bugatti Chiron, Lamborghini, private jet etc. and recently the media reported that the Portuguese skipper flown to Southern Europe with his $28million private jet for sabbatical. 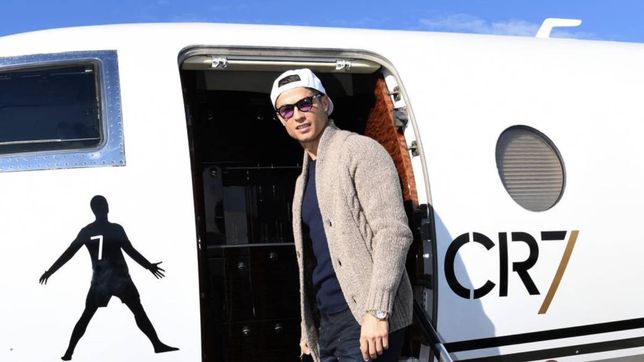 Cristiano Ronaldo in front of his private jet

After meeting Georgina Rodriguez in a Gucci store for the first time in 2016, Cristiano immediately fell in love with the beautiful shop girl who eventually became the mother of four children and an important part of Ronaldo’s life as of today.

The Manchester United star has brought the world to the feet of the Spanish girl who used to exhaust them working in a fancy store, from cars and diamonds to watches, holidays, and homes.

Few years ago, CR7 surprised Georgina with a sudden romantic trip to the beautiful Greece by his $28,000,000 private jet where they spent a couple of days ahead of the following football season. CR7 with his girlfriend in their private jet

Since the beginning of their dating life, Cristiano Ronaldo girlfriend has been mesmerized by numerous and precious presents like a monthly allowance of US $110,000; a US $830,000 Cartier engagement ring from the megastar on several occasions.

The couple may now select from a variety of lovely residences in Madrid, Turin, and even Manchester and their residence in Italy was a magnificent estate complete with a cutting-edge gym but they presently reside in a Cheshire, England, mansion worth US$4.5 million.

How Cristiano Ronaldo brings the best out of the world’s most beautiful footballer
Transfer rumor: Barcelona is reportedly recruiting a £150k-per-week superstar to replace Frenkie De Jong at Camp Nou