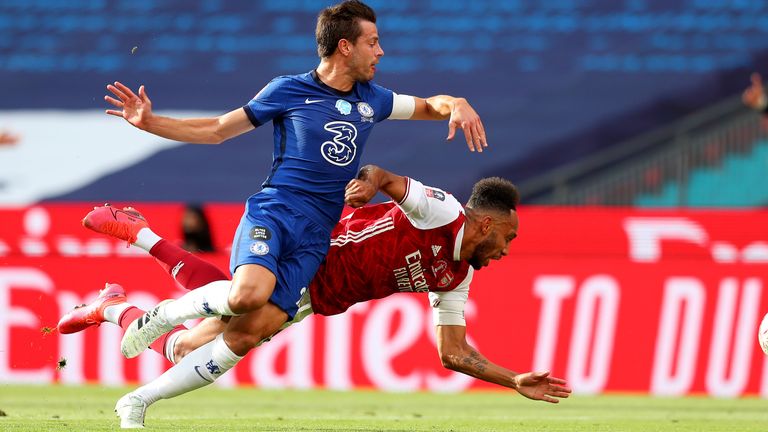 Chelsea have impressed the fans & pundits since their former player Frank Lampard took over the team at the start of the 19-20 season. They had a topsy turvy season going on but in the end, the Blues ended the season placing 4th in the Premier League points table.

Yet, the Chelsea boss can’t ignore the fact of how his team’s defensive line has been exposed on multiple occasions during the whole season. The team conceded 54 goals in total in the recently ended Premier League season. That reflects how fragile the defense has been for Chelsea.

FA Cup final wasn’t a different day as well. Chelsea defenders again failed to perform on a bigger stage which cost them the FA Cup. Blues winger Christian Pulisic put them ahead in the 5th minute of the final. The lead was intact till the 28th minute when Chelsea captain Cesar Azpiliqueta brought down rival captain Pierre-Emerick Aubameyang in the penalty box conceding a penalty. The Gabonese striker didn’t make any mistake to equal the scoreline from the penalty.

Later in the match, whenever the Gunners tried to pass the ball over the top, Chelsea players struggled to impede the opportunities Arsenal players created.

Eventually, the outcome arrived during the 67th minute of the match, when the lack of coherence among the Blues was apparent on the field. When Hector Bellerin tried to move forward from the midfield with his blistering pace, Antonio Rudiger was in front of him to stop. But he failed miserably to do that as the Spanish right-back nutmegged him.

Then, Andreas Christensen was there to prevent him. Somehow, he made an interception but the ball went straight to Nicolas Pepe. Obviously, he wasn’t there to lose the ball. Finding Aubameyang in the left flank alone with Kurt Zouma, he simply passed it to their main man. And, Aubameyang knows how to send the ball into the net perfectly.

Within a matter of seconds, the scoreline changed in favor of the Gunners what was supposed to be. It wasn’t always about the ability of the defenders. Sometimes, it is about integrating them properly to defend the opponents.

Without any doubt, Chelsea have been excellent in the transfer market by signing world-class attackers like Timo Werner, Hakim Ziyech. As per the rumors suggest, Kai Havertz from Bayer Leverkusen is also on the verge of coming to Stamford Bridge.

But they should keep in mind that these signings will bring nothing for the team if their defensive vulnerability isn’t solved soon. Lampard certainly needs more defensively solid players who can fill the void of players like John Terry or Gary Cahill. Also, he needs to renovate the defensive structure of his team to capitalize on the performance of his attackers.

Now it is up to Frank Lampard whether he wants to continue with back three or he will prefer to use back four to bring more stability in the defense.