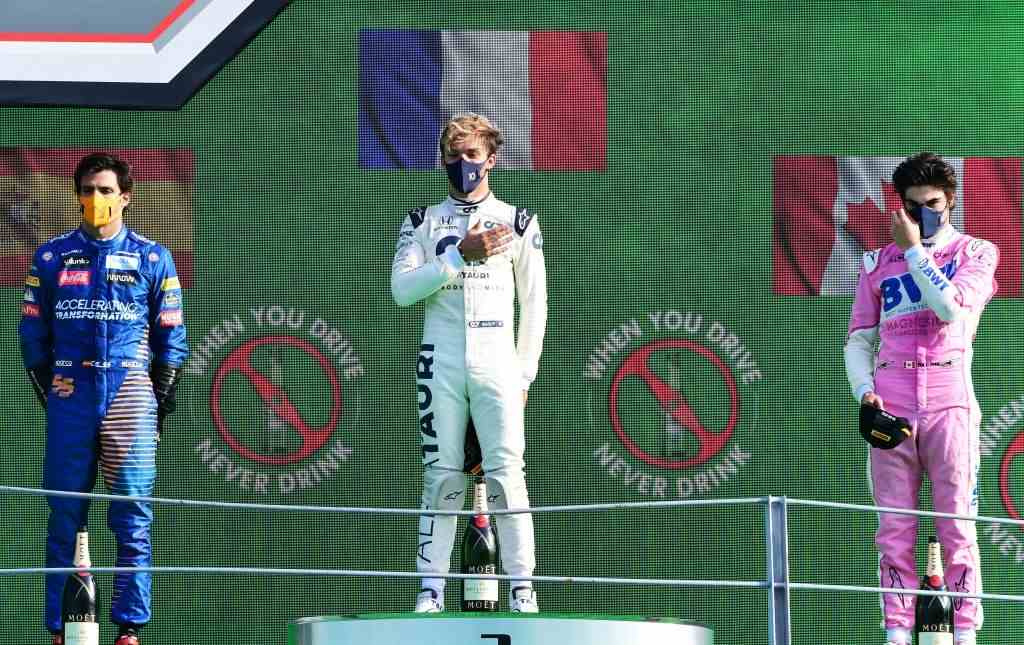 A race filled with the utmost drama, unrest, and nail-biting moments is what makes it the most gripping and exciting one. This weekend race at Monza was filled with all, call it for car crashes to penalties to sheer disappointments and unexpected victories, the race was an entertainment-filled package. The 6th of September Italian Grand Prix will indeed be a memorable one for all as Pierre Gasly stuns the F1 world standing on the podium position. He defeated all, including Hamilton who faced a pit penalty in the track. This was an unfortunate event for the most historical Italian team since they were disqualified at early laps for car wrecks.

It was indeed a rollercoaster ride for the 24-year-old Pierre Gasly to steer clear of all troubles and lead the way to score the home run lacing the air filled with utter shock. Which was followed by Carlos Sainz and further by Lance Stroll?

It was the inaugural crown achieved by the Pierre Gasly for the Italian team: Scuderia Alpha Tauri in the Italian Grand Prix, which indeed can be called an accurate ‘home run.’ Therefore, it further created an uproar all over the staged place. The National anthem was played at the highest volume and sung at the top of the voice rejoicing their victory; that reverberated through the entire grid, leaving everyone enthralled by the incredible impact.

What Fumed the Mercedes Man

Lewis Hamilton fumes as he finishes back in SEVENTH after a pit stop nightmare… with Pierre Gasly taking a shock win on day of huge drama at Monza https://t.co/Tizhe3tiT9 #ItalianGP

Lewis Hamilton had to face a terrible penalty stop of ten seconds that got the race out of his hand and also shattered the dream to bag the 90th score of his entire racing career. This has happened when he stopped at the pit lane for a change of his tires while it was closed, going against the rules dropped him to the pit of misfortune. The penalty situation got him agitated and all steamed up –“It’s bulls***” this was how he reacted.

Hamilton was on the lead at the early laps until the 20th Lap where the first car drama took place with Kevin Magnussen’s Haas losing control and broke down. This was followed by the next event where Charles Leclerc bumped into the barriers at the Parabolica, causing a dreadful wreck on the 27th lap. It was this hour where Hamilton had the unwanted nightmare coming true. While the safety car was out on patrol leading the rest of the cars went to their allotted pit stops the Mercedes #44 drove off to the stewards’ for the penalty grievance.

Hamilton abiding by the penalty rules, started late, though he battled the entire racecourse to stand P7 at last. Leaving everyone of the team, especially their team principal Toto Wolff upset about the whole fact.

The Historical team scarred a disastrous history this weekend at Monza

Vettel: "It's poor where we are, for our home race. I think it's probably a blessing that there is nobody on the stands". ?#ItalianGP ?? #SV5 #F1 pic.twitter.com/vJTLFAsd2T

The Scuderia Ferrari teammates both lost their race in midways with their usual car drama. Sebastian Vettel had to stop at the Q1 due to failure of the car brakes and Charles Leclerc drove at the speed of 180 mph and crashed into the barriers causing heavy debris all over the place.

It was later announced that he was safe and sound, all healthy. The team went through an unimaginable and disastrous race this weekend at the Italian Grand Prix.

It was sustaining the most entertaining packaged race that was filled with chaos and dramas, extremes of thrilling moments, and a little luck. Pierre Gasly witnessed the chequered flag for Alpha Tauri after Hamilton from Mercedes lost his strategies in a penalty, both Ferrari motorists being disqualified from the course of the race. Max Verstappen from Red Bull departing from the race as well midway.

The triumph was unimaginable for anyone, especially for the Frenchman who ended up in eyes full of tears after leading the last lap. The podium was shared with Carlos Sainz from McLaren Renault and Lance Stroll from Racing Point.

At the later interview sessions after the match, Hamilton was spotted congratulating and appreciating Pierre Gasly, who owned the first prize for the Italian team at the Italian Grand Prix.

Renault to become Alpine from 2021, 4th team to hold new badge of identity in past few years
The fresher for F1 will pay an entry fee of $200 Million from 2021 season