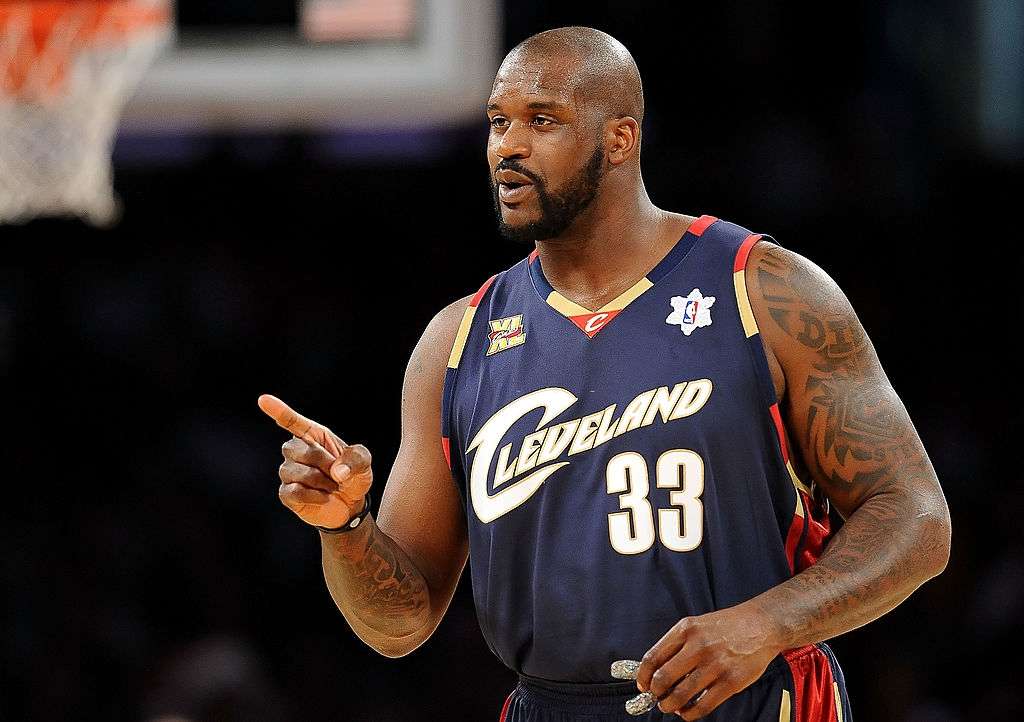 A physical sport like NBA always requires players with heavy structure to bring major impact on the game. You simply can’t deny the fact how athletic players play a vital role to control the game. But what if overweight turns each of them into the heaviest NBA player of their generation?

It is true that maintaining a decent body is as crucial as gaining skills for professional athletes. In case of NBA, it is even more important for the physicality this game requires. If you are a basketball player with above average height & weight, you have a distinct advantage over many.

On the other side, gaining just above that ideal shape makes it difficult to improve your game. Over the years, NBA fans witnessed a lot of players like this in its history. In this article, we will try to highlight some of those biggest players in NBA.

Who is the biggest current NBA player?

Tacko Fall, the 7 feet 5 inch player coming from Senegal is the heaviest current NBA player. Along with his immense height, he is also 311lbs in weight. He is a newbie in this competitive league who has just begun his NBA career this season. So far, he played 6 games in the 2019-20 season earning 3.2 points per game.

Who is the shortest player in the NBA?

Muggsy Bogues is the shortest player ever appeared in the history of NBA. With 5 feet 3 inch height, he looked relatively tinier than many on the court. Even after facing such a big hindrance, he spent 10 long seasons in the NBA. During this period, he participated in 889 matches with 7.7 points per game.

There have been the arrival of plenty of heavyweight players in NBA history. Among all, we will notify some of them in this list: 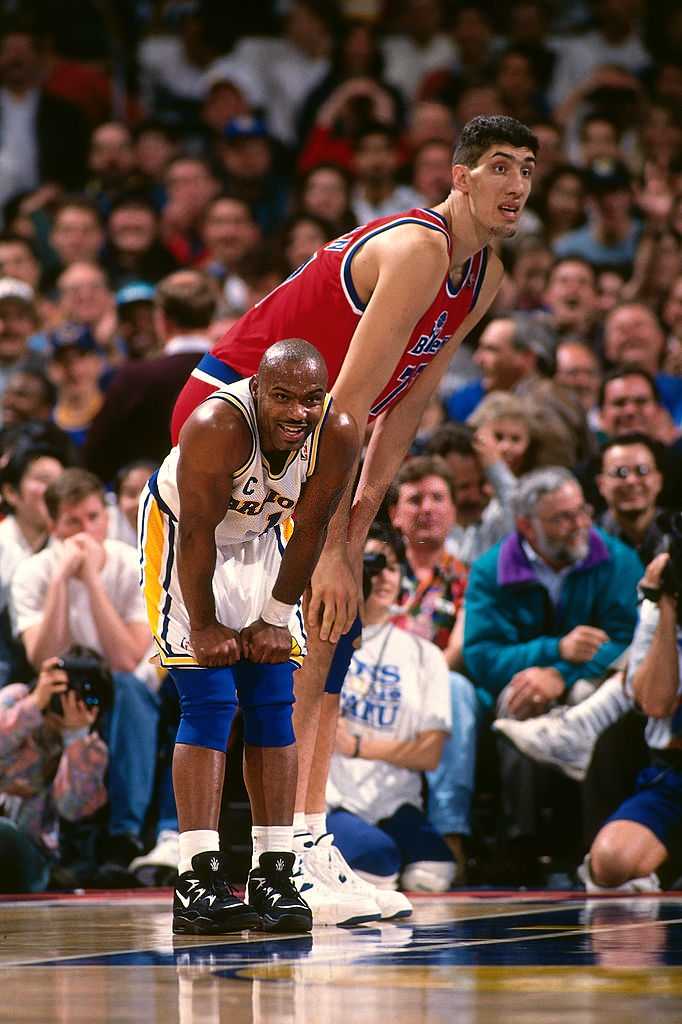 Let’s start with a massive 7 feet 7inch guy who is the tallest NBA player ever in the history of NBA. Gheorghe Muresan, the Romanian NBA star played for two different teams in a career span of only 6 years.

For being such a tall guy, he appeared in the headlines of media so many times. His gigantic figure of 303lb always helped him an extra advantage to block the shots. Also, his franchise was optimistic about him to flourish in the league. In fact, Muresan tried his best to improve his performance which is visible in his achievement of 1995-96 most improved player award.

However, because of being slightly overweight as compared to his height, he struggled to cope with the NBA standard. In addition, he was suffering from pituitary gland disorder which didn’t allow him to continue despite his hard work & enthusiasm. 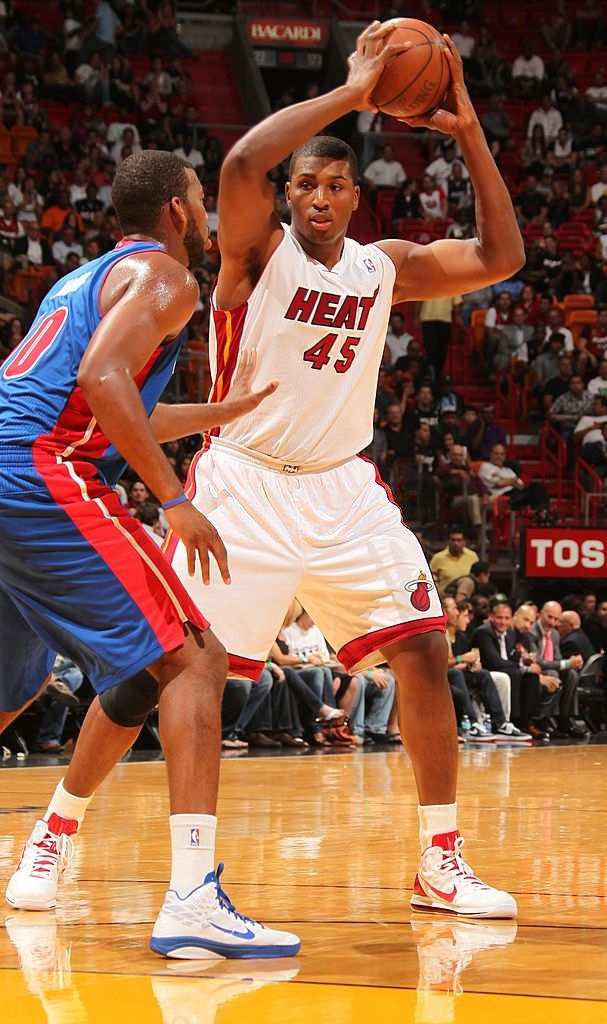 The next guy on our list had an enriched pre-NBA career which created so much optimism. Way back in college days, he played for the University of Texas. Later, he represented Virtus Bologna and was a regular member of Terry High School for three years.

After being the 32nd pick of Miami Heat in the 2010 NBA draft, Dexter’s NBA career started. But it just didn’t become successful as it was expected to be. His obesity just didn’t allow him to settle in any team.

Averaging only 2.3 points & 1.8 rebounds per game, he could merely utilize his massive body properly. That’s why he had to play in 5 different teams in only 5 years of NBA life. 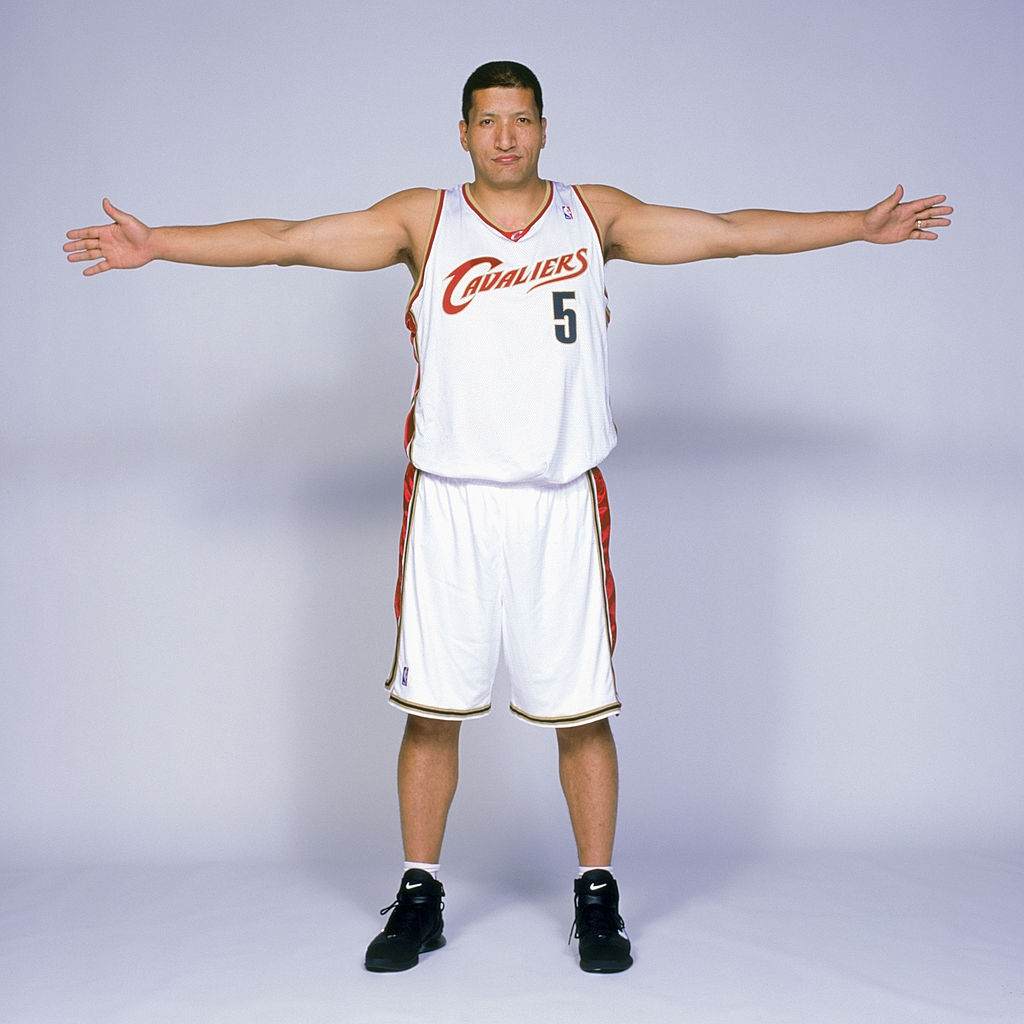 With an almost similar career graph like Dexter Pitman, Mengke Bateer also found it hard to get accustomed to NBA. Meanwhile, there is a difference that Bateer arrived in NBA after a successful campaign in China. But NBA’s standard is something else, you know?

Keeping this in mind, Bateer had to fight hard to gain a place in the starting squad. Also, he was finding it difficult to adjust to the language & culture of the USA. That being the case, Bateer only managed to continue 3 years in the NBA.

As expected, he only earned 3.4 points per game during this period while playing for 2 different teams. 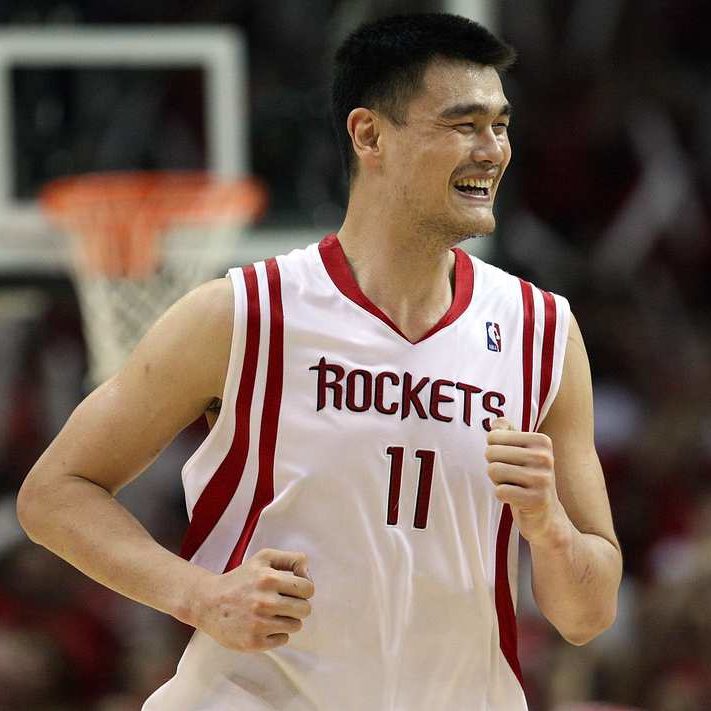 Here comes another Chinese originated player in our list none other than Yao Ming. This 7 feet 6 inch guy is the tallest ever to be featured in the Hall of Fame. In a career span of 8 years, he had been loyal to his franchise Houston Rockets till his retirement.

But regarding a perspective, he is different from previously mentioned heaviest players in NBA. What’s that? Well, even though he was abnormally heavy comparing with the general NBA pre-requisite, he had a pretty decent NBA career.

With an average of 19 points per game, Ming consistently performed for his team throughout his career. For this reason, he earned a reputable place in the All-Star team 8 times & All-NBA team 5 times. That proves his efficiency as a successful NBA player even after having 310lbs weight. 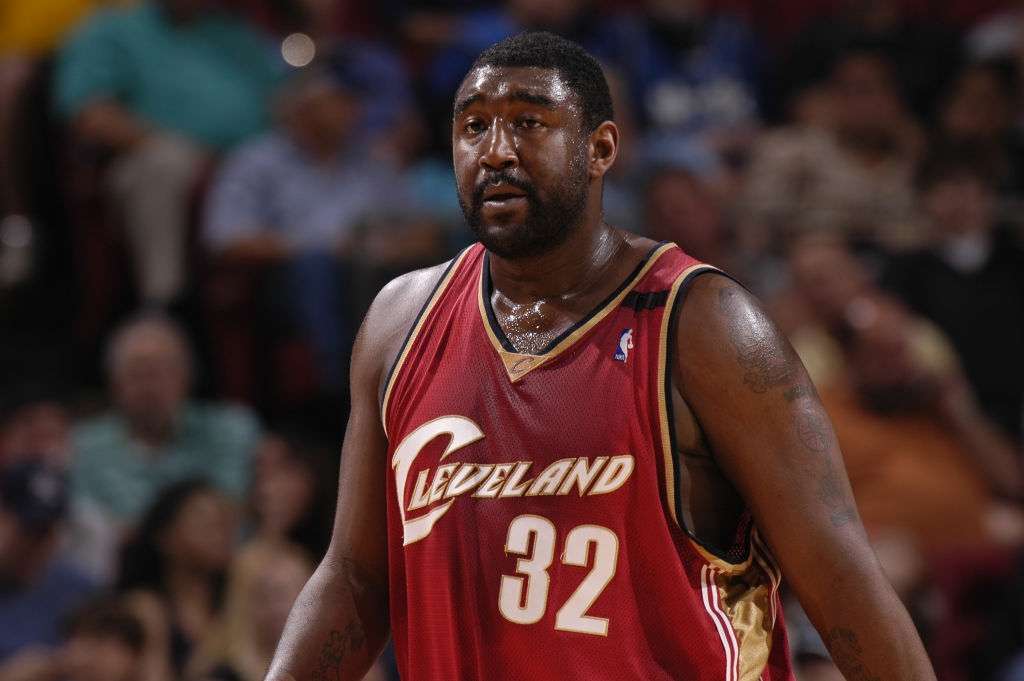 Towering with a massive 6.8 feet height & 284lb weight, Robert Traylor had undoubtedly a mammoth body. For being the fattest NBA player of his time, Traylor was nicknamed as “Tractor.”

However, he had been an exciting prospect at the University of Michigan. Hence, in 1988, Milwaukee Bucks gave away Dirk Nowitzki, the finest European player in NBA to take Traylor.

Who knew at that time Traylor would disappoint all for not controlling food intake? That guy had immense potential to be an NBA star but he failed miserably to maintain a strict lifestyle. For being one of the biggest NBA players, his weight just went out of control.

His ever growing body structure is reflected in his NBA career with only 4.8 points per game. Unfortunately, the big man died of heart attack at the age of 34 in 2011. 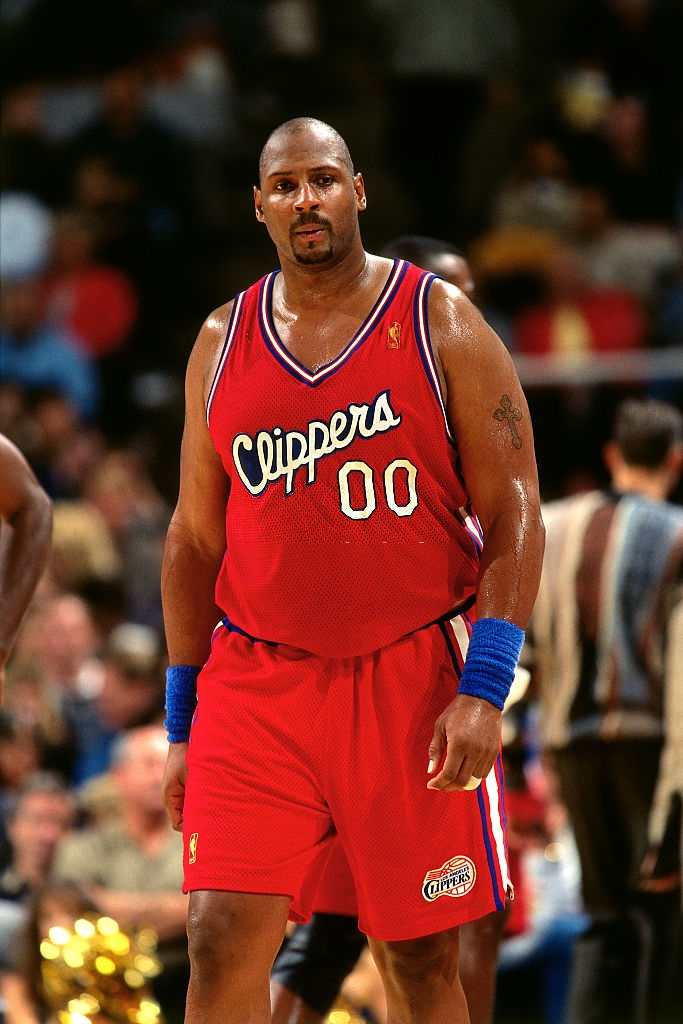 After moving to our next player on the list, you will get another player like Yao Ming who had been successful to prolong his NBA career. Despite being 320 pounds heavy, Kevin Duckworth played for 12 long years in NBA.

He played in 5 different teams during this time but Portland Trail Blazers was closest to his heart surely. Spending 7 seasons in the Portland earned him an average of 13.6 points per game. His continuous prosperity was veritable in his winning most improved player of the 1987-88 season.

But as soon as his career advanced, his weight also increased a lot. That severely affected his flexibility on the court which made him one of the heaviest NBA players. Nevertheless, his 2 All-Star selection is the ultimate proof Duckworth was very impressive in his prime.

If you had been an NBA follower in the ‘90s, you might recognize Thomas Hamilton as the heaviest player in NBA of that time. A star college basketball player who just couldn’t implement his vast potential in the bigger platform for his continuous growth of the body.

After being undrafted, Boston Celtics took him in its den at the start of 1995-96 season. But he only made it to the court 11 times in his first season. That made him bound to travel to another league where he spent 3 years.

After returning in 1999-00 season, another famous franchise Houston Rockets picked him. As everyone expected, he was able to play only 22 games. Then, Rockets released him since he only managed to earn 3.7 points per game in those games. 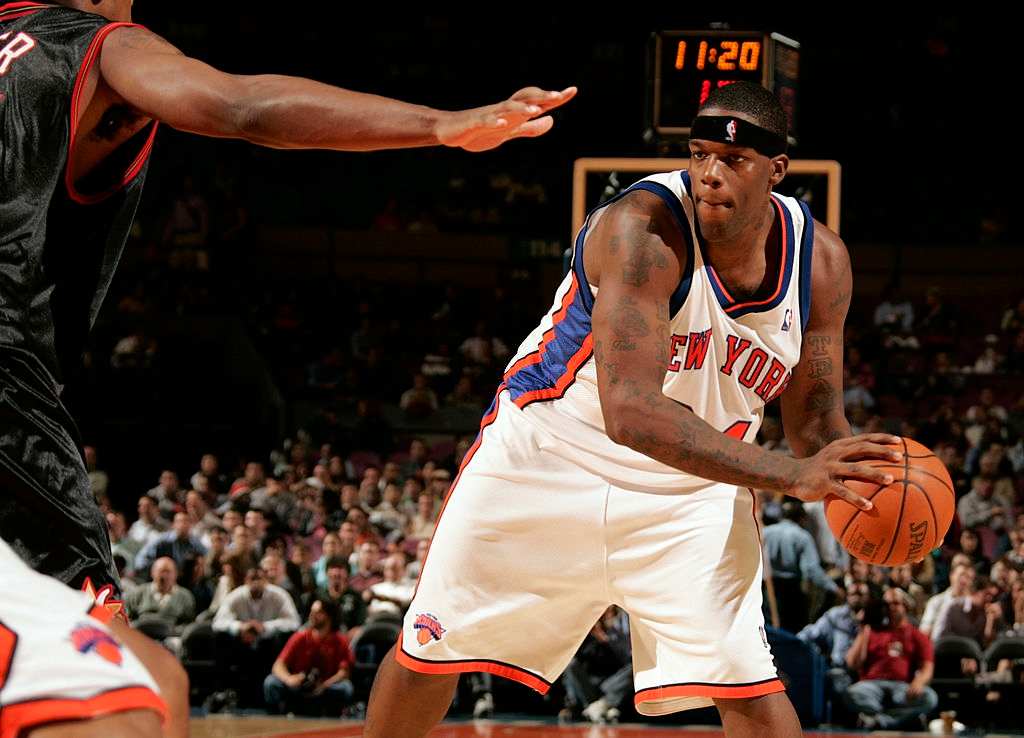 Named as Baby Shaq, Eddy Curry is another excellent NBA star who was among the heaviest NBA players. With a gigantic 7 feet height, Curry attracted the Chicago Bulls to trade for him. If you look at his career graph, he performed considerably decent according to his caliber.

His early NBA days were in the dens of Chicago Bulls & New York Knicks where he averaged 11.8 & 15.2 points respectively. But since then, his career started to fall pathetically. While auditioning for Miami Heats, he weighed about 350 pounds. After that, he started working out which helped him to lose around 50 pounds to be fit for the NBA.

Still, he couldn’t come back in perfect shape to be eligible enough to play. As a result, he had to put an end to his NBA career two years later for his excessive obesity.

Arguably the most outstanding player in this heaviest NBA players list, Shaquille O’Neal himself is a legend in this sport. Unlike others, he had the longest NBA career among all in this list passing 19 years in NBA. Without any doubt, he had won a lot of awards & honors during this period.

Alongside his glorious NBA career, he caught the eyes of many for his insane body structure. He was strong, athletic & also capable enough to break the hoop if needed with his heavy muscles. Standing tall with large 7 feet 1 inch height, Shaq had the biggest feet in the NBA with 22 shoe size.

Moreover, he even reached to 360 pounds in weight once. That’s why his fellow team member Kobe used to criticize him for not doing regular exercise. Kobe never compromised to keep proper fitness while Shaq was slightly indifferent to maintain any strict routine to stay healthy.

Surprisingly, that didn’t affect his career by no means. Yet, according to many, he is the heaviest center in the NBA who used to dominate on the court. With 15 All-Star & 14 All-NBA selections, Shaq is also a Hall of Famer for his enriched NBA career. 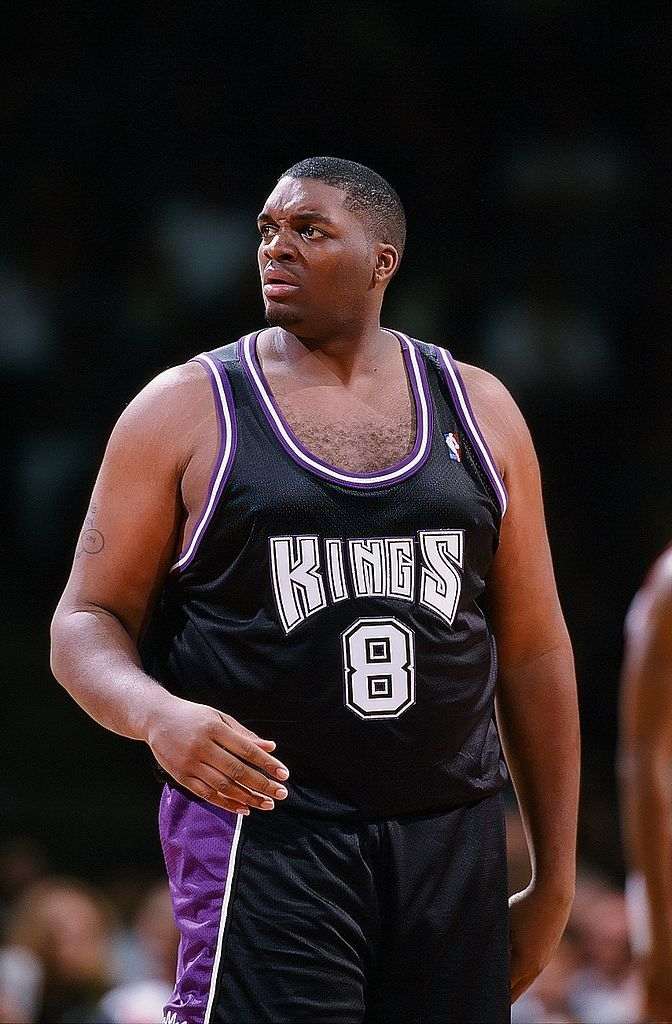 Who is the heaviest player in the NBA history? Here you go, Oliver Miller weights the most in the NBA with a whopping 375 pounds. Imagine facing such a giant sized guy ahead of you on the court, that can be troublesome, right?

Exceptionally, where many find it hard to continue their NBA career with such colossal figure, Miller played for 9 seasons in the NBA. In fact, his dedication & work ethics deserve a round of applause. Anyway, he had a topsy-turvy NBA journey for being the heaviest NBA player ever which led him to switch to other leagues as well.

By any means, he managed to take part in 493 matches where he averaged 7.4 points per game. For the last time, he appeared in the headline for piston-whipping a man who sentenced him to jail for one year.

So these are the players who have made their ways in the heaviest players in NBA history list. Besides, there are also other players who deserve to be in this list for their physical appearance. Here are the honorable mentions:

That’s all from us today. We hope you enjoyed reading it. You can also inform us which player you like most in this list. We will come back soon with another NBA article. Stay safe till then.