Kevin Durant Achilles tear: Will the 2-time Finals MVP return to his peak with the Brooklyn Nets? 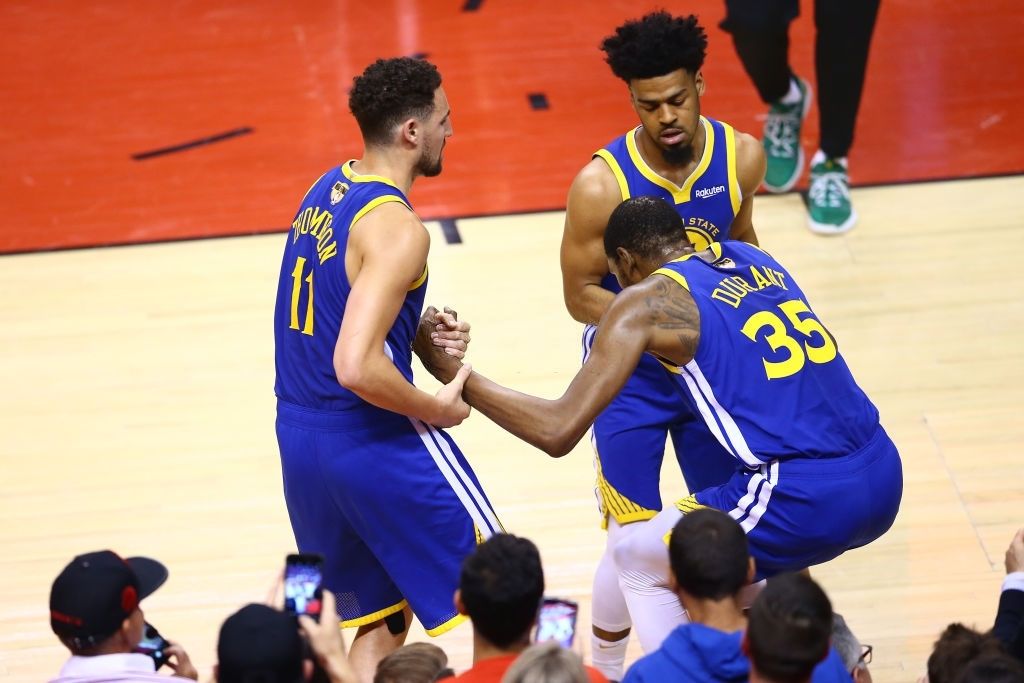 Kevin Durant is the kind of player a mad scientist might produce in a lab if he had the chance. At 6’11” without shoes, the man is listed at small forward, but has guard-like skills with the ball.

Durant entered the league as a dominant scorer, averaging over 20 points per game in his very first season. This figure rose to 27 in his sophomore year, and by 2009-10, Durant was winning his first scoring title in the NBA.

He won it again in 3 of the next 4 seasons. He was the pivotal force that led the Thunder to the franchise’s only Finals in 2012. Durant even outscored LeBron in the Finals, but had to bite the wooden spoon as the Heat put them away in 5 games.

Durant would come up short for the next 4 seasons starting 2012. Sam Presti traded James Harden away because of Clay Bennett’s miserly ways. The Thunder were never the same offensive force again after that as Harden became an All-NBA team regular with the Rockets.

Even so, Durant put up a stellar 50-40-90 season in 2012-13 as the Thunder looked primed to make the Finals again. But disaster struck as Russell Westbrook suffered a meniscus tear in the playoffs against the Rockets.

Durant raised his game to MVP form in the 2013-14 season. In a year when Westbrook was missing for the most part, Durant carried the Thunder offense with 32 points per game and 5.5 assists. They got thoroughly outplayed by the Spurs that year in the Conference Finals, losing 4-2.

Durant kept adding moves one after the other to his arsenal. He improved his ball-handling, facilitating skills and became a better rebounder. Durant also improved his man-to-man defense during his final years with the Thunder.

The worst moment of his professional career would be to concede a 3-1 series lead to the 73-9 Warriors. Despite having them on their back, the Thunder could not finish the job off. Durant shot poorly in the final 3 games of the series as the Thunder squandered their best opportunity at a ring in 4 seasons.

After 9 seasons with no championship success, Durant looked to free agency as a path to the championship. He took less than the max to sign with the Warriors, instantly forming the greatest super team of all time.

They cantered to 2 straight championships with Durant becoming the most well-rounded player in the league. He improved leaps and bounds as a team defender, averaging over a block per game during his 3-year tenure with the Warriors.

They were prohibitive favorites with Durant on the roster, and at no time did they look more formidable than in the 2017 NBA Finals. Durant ran James and co off the court and won 2 straight NBA Finals MVPs.

During the Warriors’ 2019 playoffs, Kevin Durant Achilles tear unexpectedly ruled him out for 10 straight games. With the team down 3-1 in the Finals, the mercurial forward decided to take the floor for the champions.

KD went 3-of-5 from long range before getting the worst injury possible for a professional sportsperson – an Achilles tear.

Due to this fortuitous injury, the best scorer in the league today missed a season at the very peak of his career – 31 is the age when most players peak on court.

Despite the diagnosis, his free agent stock remained sky high. The Brooklyn Nets paired Durant and Kyrie Irving together, signing him on a sign-and-trade by sending D’Angelo Russell to the Warriors.

Under new head coach Steve Nash, who’s taking up his first head coaching role anywhere, the Nets will be expected to make a charge for the Eastern Conference championship.

Based on starpower alone, Durant and Kyrie are among the best duos in the league. Both of them possess three-level scoring ability, and do not have a weak spot in their offensive repertoires.

But there will be serious questions as to how explosive Durant will be with his healed Achilles. The only player to ever come back in any sort of good form from such an injury was Dominique Wilkins.

The good thing about Durant’s playing style is that he’s as unreliant on his athleticism to be effective as anyone. The man is so tall and his jumper so fluid that he can just shoot over anybody.

Durant’s tight handles and ability to play off the ball and thrive serve to make him the same level of offensive threat. While he’s going to move less in terms of cutting and screening, Durant will be part of a motion offense under Nash.

This will bring out the best aspects of his gameplay in full – the ability to put the ball on the floor and make plays for others. Using his scoring threat as a double-edged sword, Durant can make virtually any team pay.

In short, Durant will have to resort to an old man style of gameplay in order to be the threat he used to be. We all know he’s more than capable of doing this, but the question remains whether his teammates allow him to be that player.

NBA: Top 10 most clutch players of all time
The biggest challengers to LeBron James and the Lakers in 2020-21 NBA season