An appearance so monstrous yet loved by all: Umaga behind the Titantron 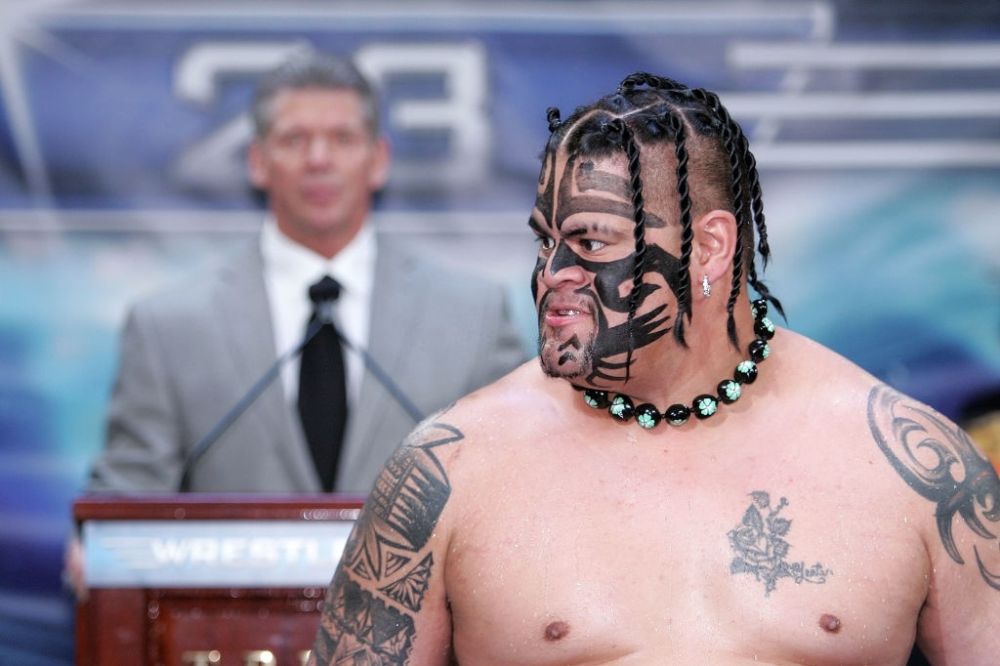 On 4th December 2009, the Samoan wrestler Edward Smith Fatu, Eddie Fatu or Umaga behind the Titantron, as known by fans, was discovered unresponsive and possibly unconscious by his wife in their Huston, Texas home. It didn’t take her long to realize that something was very wrong because, at that point, blood was coming out of his nose as well.

Immediately she contacted the emergency service, and Fatu was rushed to the local hospital and was pronounced dead later on. Fatu died at the age of 36.

Earlier everyone believed that he died of a heart attack. But the actual cause of death would be another painful reminder of the professional wrestler’s unsuccessful battle with substance abuse. Ironically, Fatu died just before he was supposed to return to professional wrestling in WWE as Umaga, behind the Titantron, the savage, the ring name that brought him his fame and stardom.

Edward Fatu a member of the legendary Anoa’i family, the famous Samoan–American professional wrestling family. His uncles were Afa and Sika Anoa’i, and his brothers were best known to their fans as Tonga Kid and Rikishi. Also, his cousins are Rosey, Roman Reigns Yokozuna, and the today’s famous Hollywood celebrity The Rock. So it’s natural to assume that there were some big expectations for him to succeed. He succeeded; he found great stardom but not without climbing the series of ups and downs most wrestlers have to face at the early stages of their career. Fatu trained at the Wild Samoan Wrestling School at Minneola, United States, with his cousin Matt before working in uncle Afa’s world extreme wrestling league in 19995. In 2001 Eddie and Matt went to work in the WWF’s heartland wrestling association as the island boys. Honing their skills in the WWF’s development territory, besides the two worked in another WWF territory wrestling program.

The 3-minute warning, a tag team in WWE, continued from 1996 to 2003. It featured Eddie Fatu and Matt Anoa’i under their ring name Jamal and Rosie, respectively. They served as the Bischoff’s, the RAW manager, henchmen. They punished anyone the Bischoff deemed boring after using up the three minutes of their television time. But Umanga behind TitanTron was soon released by WWE because of a bar fight. However, in 2006 they reunited one last time.

After being released by WWE in 2003, Fatu worked in Total Non-Stop Action Wrestling under a new ring name, Ekmo Fatu. And he played in the All Japan Pro wrestling from 2003 to 2005. Soon in April of 2006, WWE singed Eddie again and brought him back under a new ring name, Umaga. Umaga, the newly created persona for Eddie, was a savage who couldn’t speak any English at all, and he felt no pain as well while dishing out a considerable amount of it. Soon this monster looking wrestler bulldozed his way into the WWE roster, seeming unstoppable. Soon he met his worthy opponent, WWE champion John Cena in 2007, for the World Champion title. 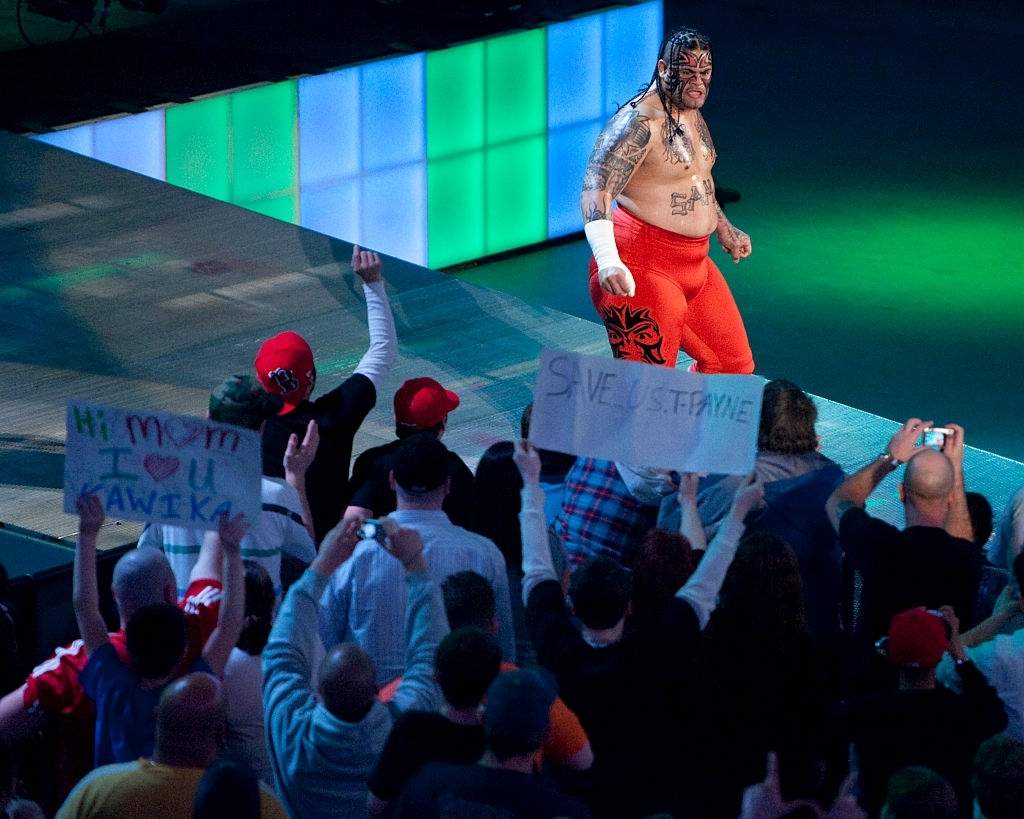 Impressively enough, even bigger things were waiting for him in his career as he entered into WWE’s one of the biggest WrestleMania matches of all time. On the 1st April of 2007, he was supposed to battle against Donald Trump’s wrestler Bobby Lashley, as Vince McMahon’s fighter, the so-called Battle of the Billionaires match, in the WrestleMania 23. The pay per view for this match went up to as high as 1.25 million buys. That was a record high at that time, which wasn’t broken until WrestleMania 28, 1.3 million buys. But eventually, Umaga behind TitanTron, dropped the match, which led to McMahon losing the game and his hair.

Loved by his fans, Eddie Umanga behind the Titantron, certainly had his moment. The Samoan Savage was a two – time WWE Intercontinental champion. Earlier in his career, his tag team The Island Boys won the HWA Tag Team Championship in November 2001. Fatu even had an undefeated streak in the 2006 – 2007 season. His popularity and numerous fan-base is part of the reason why he was always invited back to WWE.

In September 2007, Fatu got suspended again for violating WWE’s Wellness Policy, with 19 other wrestlers. Soon in 2008, Umaga behind the Titantron switched to SmackDown, reportedly to work with the Undertaker.

Unfortunately, he suffered from a knee injury, which kept him out of the ring for several months. The program to work with the Undertaker got scrapped. Although it seemed at that point that more success was waiting for him, Umaga started to struggle with his drug abuse. Soon in 2009, he was accused of a second WWE Wellness Policy violation.

In June 2009, WWE rereleased him. Before his death, Umaga owned a nutrition store just outside of Huston, Texas. However, he was supposed to be brought in for Hulk Hogan’s tour in Australia and was supposed to get himself invited back in the WWE.

After Umaga was brought in to the hospital, he was kept on life support. He died soon after a second heart attack and pronounced dead at 3 pm. According to the Wrestling Observer, Fatu’s autopsy listed a history of heart disease and a history of substance abuse. He also had heart issues, including an enlarged heart, which is common among young wrestler deaths. If Fatu remained in WWE, his heart issues might have been detected earlier because of WWE’s wellness policy screens for any possible heart issues.

Interestingly enough, it wasn’t the heart attack that caused Umaga’s death. According to the autopsy done after his death, the reason for his death was acute toxicity of hydrocodone, carisoprodol, and diazepam, the combined toxicity of painkiller, muscle relaxer, and an anti-stress drug. Sadly enough, WWE failed to acknowledge his death on WWE television after his death, and people heavily criticized them for that.

Like many of his contemporaries, Umaga’s personal demons destroyed his dreams. We can never know how far his career might have gone had he not died so tragically.

John Cena: Life journey of a ‘Hustle’ man who holds the capability to become the next big thing in Hollywood
WWE ranking: 10 top WWE superstars of the current era