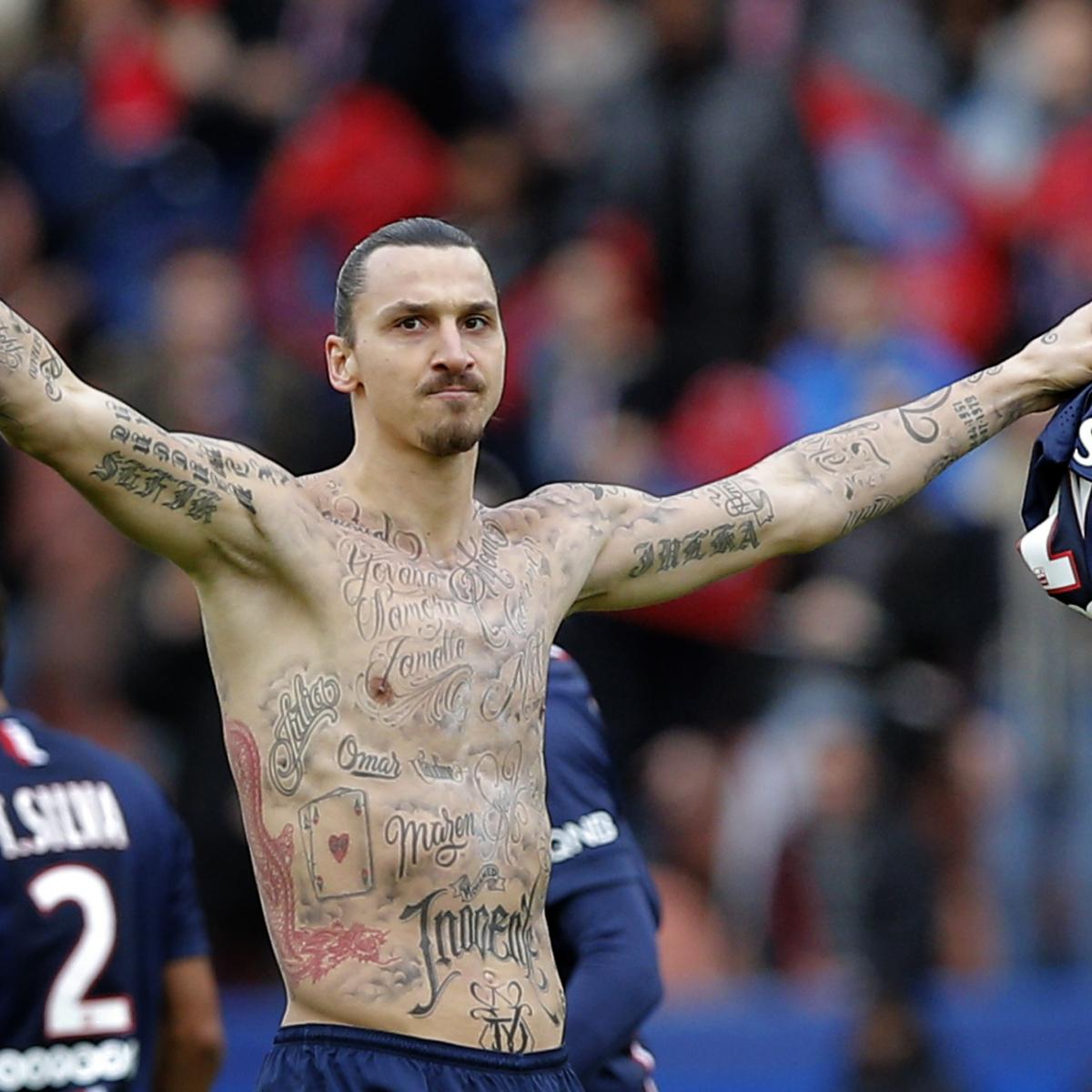 AC Milan and Sweden superstar Zlatan Ibrahimovic, 40, is one of the most prolific strikers of the footballing world with a staggering height of 1.95 meter, but loves to come in the spotlight with exquisite behaviors and spectacular comments.

Ibra made his debut in professional football for his home club Malmo in 1999 and then moved to Ajax a couple of year later. Zlatan is a kind of player who loves to explore new countries and experience new journey that gave him the opportunity to play for many famous clubs like Juventus, Inter Milan, FC Barcelona, PSG, Manchester United and AC Milan.

Zlatan’s illustrious career has influenced him over the years to apply different inkings on his body.

Let’s have a detailed look at some of his notable tattoos.

How many tattoos does Zlatan have?

Former Manchester United striker Ibrahimovic inked 29 times in his life so far and there are 14 tattoos that can be seen on his body which were inked permanently.

A renowned tattoo artist from Gothenburg, niki23gtr, is reported to be the latest artist who inked this Swedish International.

Where are Zlatan’s tattoos located?

As a tattoo enthusiast Zlatan applies his all 14 tattoos on his upper body that revolves around his wrists, backs, necks and biceps. 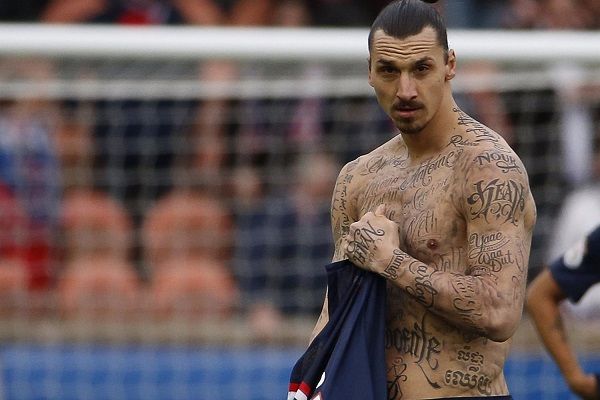 What do all of Zlatan’s tattoos mean?

Superstar Zlatan Ibrahimovic struggled a lot during his childhood and is very much attached to his family since then and so this journey has been reflected on his body arts over the years.

Only God can judge me Tattoo: Milan forward Ibrahimovic explained the reason for having this tattoo on his stomach by quoting, “They could write whatever they wanted in the papers. Scream anything at all from the stands. They still couldn’t get at me. Only God could judge me! I liked that.  You have to go your own way, so I got those words tattooed on me.” 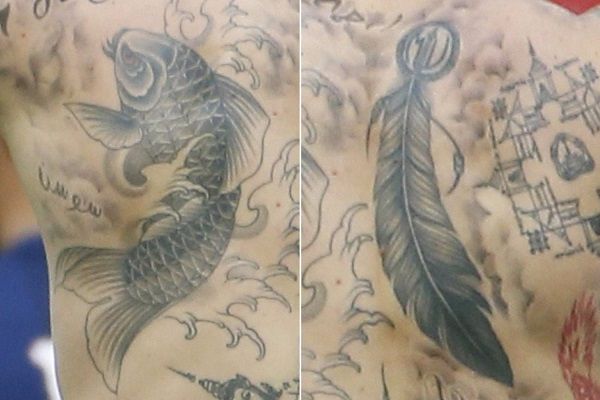 Vitruvian Man tattoo: The Swedish star inked a ‘Vitruvian Man Tattoo’ inspired by the artwork of famous Leonardo Da Vinci which he described as an ideal human soul that lives inside his thoughts. 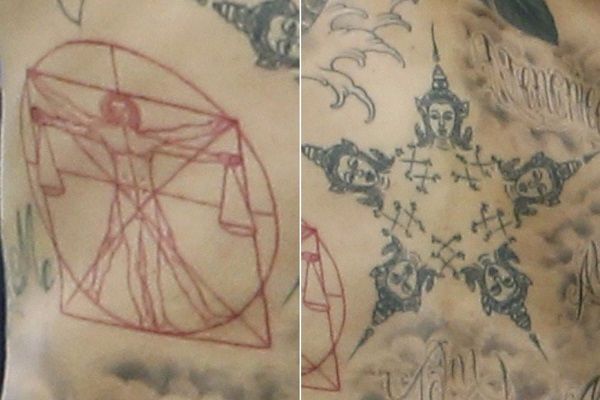 Birthdates Tattoos: AC Milan striker has body arts on his left wrist and biceps as well, that depicts the ‘Birthdates’ of two female members of his family.

The Ace of Hearts Tattoo: Zlatan dedicated an ‘Ace of Heart tattoo’ solely for showing the love for his spouse which is imprinted on other part of his left wrist. 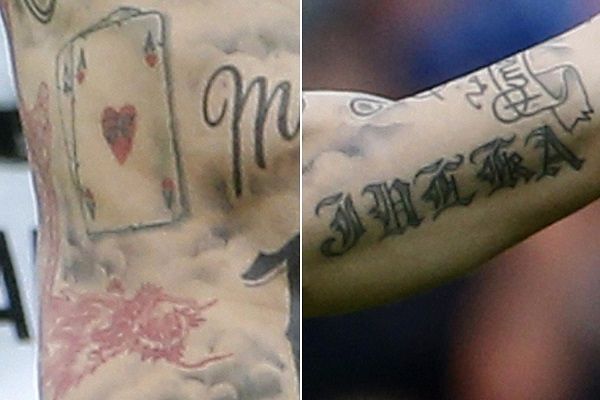 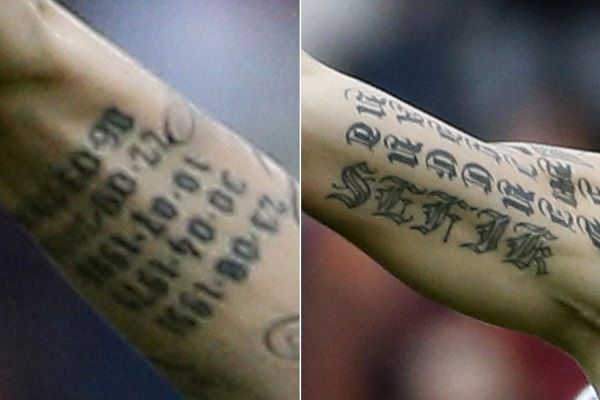 Zlatan’s eloquent tats are mostly made for his affections towards his family members. For example- ‘Ibrahimovic Code Tattoos’ are dedicated to his father, brothers and two sons (Maximilian and Vince) and again ‘The Ace of Hearts Tattoos’ is dedicated to his wife Helena Seger.

‘Birthdate tattoos’ on his left wrist is dedicated to his mother Jurka and sister Sanela and there is also an Arabic inscription tattoo visible near his chest on which the name Jurka is written.

Ibrahimovic might have failed to win major trophies for club and country but he managed to win the hearts of millions of fans by his incredible off the field activities and through glamorous tattoos.