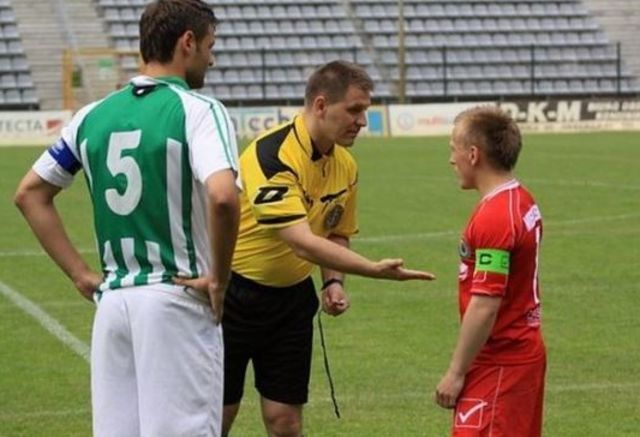 Football is a very physical game. It is true that when you’re gifted, you’re in a class of your own. But then, you have to add that extra strength to your game, else you will be out of the game before you even get started.

That said, we always believe our favorite football stars to be the all-round sample of a real-time model. You know; the looks, the heights and then the build. Yes, height is part of what makes our football stars what they are now. But there are some of these stars that do not really have that much of height and are thriving in the game.

Stop looking at us, Messi! We don’t mean you… there are a lot of football players out there who are way shorter than you are! It is true that a lot of people believe Messi is the shortest footballer out there, but this piece is about to burst your bubble.

Messi is even way taller than a lot of players. You might find that very hard to believe, but it is true. This article is about to prove that to you. These are the shortest football players plying their trade in the football world right now. In fact, a well known English League football player is even one of them.

Let’s start the list by mentioning this man who appears ridiculously short to many. Currently, aged 30, this professional player has a height of 1.68m; which means that he is 5 feet, 6 inches tall and puts him at number 10 on the list of shortest players.

He was born in 1990 in Carmarthen in Wales and has been plying his trade in the football world since he was 16 years old. He began his playing career at Swansea City in January 1990, and gained promotion to the Premier League with them from the League 1.

He joined Liverpool in 2012, making 132 appearances at The Anfield before signing for Stoke City in 2016. He plays in the midfield position for both club and country and he is currently the shortest soccer player in FIFA 19.

Niell stands at 1.63m, which gives him the height of 5 feet 4 inches and is 36 years old. Born on May 22, 1983, he started his football career with the youth set up at Argentinos Juniors in 2001 he had his official debut in April 2004 in a match against Colon de Santa Fe.

He was loaned to D.C. United on 22 January 2008. He spent loan spells with Gimnasia, Deportivo Quito, and Queretaro. During those periods, he earned the attention of people more because of his height than his exploits on the pitch.

He finally left Argentinos in 2012 to sign for Figuerence but did not stay long. He went to Gimnasia, Rosario Central, Guillermo Brown, and Quilmes between 2012 and 2019 before finally settling down at Barracas Central, who he signed for in 2019.

Our list of the top 10 shortest footballers in the world continues with the inclusion of Christian Rolando Lara Anangono. Nicknamed Diablito, Ecuadorian for “Little Devil”, he stands at 1.62m, which puts him at a height of 5 feet 4 inches.

He went hiking after this, signing for a series of football clubs which includes Barcelona SC in Ecuador, Deportivo Pereira, Real Cartagena, Manta, Dorados de Sinaloa, and Clan Juvenil. He even had return spells at El Nacional and L.C.D. Quito, before currently singing for his boyhood club, El Nacional in 2018, where he remains at present.

He is an Argentine – Mexican professional football player who plays as a forward for the Chilean Primera Division outfit, Everton. He stands at the height of 1.61m, which puts his height at approximately 5 feet and 3½ inches.

Born in 1988, he started his playing career at Gimnasia y Esgrima LP in 2006. He was not to nail down a regular spot until 2009. He was sold to Club Toluca in July 2010. He failed to break into the first team here too, which prompted the head coach to loan him to San Luis, Atlante, then Gimnasia.

He left Club Toluca in 2015 and joined Club Leon. From where he went to Zacatecas in 2017, before finally signing for Everton the same year. At Everton, he has scored 10 goals in 41 appearances and he could put up better numbers as time goes on.

Standing at 1.61m, which is approximately 5 feet, 3 inches is this Argentine professional football player who currently plays for Universidad Catolica in the Chilean Primera Division. Born on April 21, 1988, he started his football career at River Plate in 2006, in a match against Instituto on April 9, 2006. He eventually won the Apertura with them in 2008.

He went on to sign for AEK Athens in August 2015 and he scored 11 goals in 35 appearances for Athens in that season. He signed for his current club, Universidad Catolica on July 19, 2016, where he won the Apertura and Clausura in 2016 and the 2018/19 Chilean Primera Division title.

He played a total of 39 matches at Leicester City, before being released on 17th May 2010. He had enjoyed a loan spell at Mansfield Town for a month during his time at Leicester. In 2011, he joined Hinckley United in the English Conference North. Where he played till December 2012 when he joined Histon till 2013.

He went hiking from 2013 to 14, when he played for Oadby Town and Blaby & Whetstone Athletic, before signing for Shepshed Dynamo, where he stayed till 2018. Currently, he plays for Melton Town, who confirmed his signing on July 5th, 2018.

Another player who finds himself on this list is Daniel Alberto Villalva Barrios. He is an Argentine professional footballer who plays for Veracruz in the Mexican League. He stands at 1.59., which means that he is 5 feet and 3 inches tall (or short).

Born on July 6, 1992, he started his football career at River Plate in 2005, although he was to make his debut years later. He made his debut on the 8th of February, 2009 in a match against Colon and he went on to have many appearances for the club.

He later moved to Mexico with Veracruz in the summer of 2014. He went on to score 17 goals in 120 appearances for the Liga MX side and winning the Clausura with them in 2016. He definitely owns a spot on this list.

Nicknamed ”frasquito”, Argentine for “little flask”, he stands at 1.58m, which gives him a height of 5 feet, 2 inches and he is 32 years old. Born on 27th February 1987, he started his professional career with Racing Club in the Argentine Primera Division in 2005 during a Clausura tournament match against Colon.

In 2007, he was bought by FC Moscow but loaned back to Racing after half a year in Russia. He was instrumental in Racing’s bid to avoid relegation in the 2007/08 season, even scoring the winning goal against Belgrano in the relegation playoff.

In 2009, he joined Velez Sarsfield and helped the team become an Argentine champion in his first season. He was even the one who scored the winning goal in the match against Huracan in the match that was to confirm Velez as the champion.

In 2011, he joined Atalanta B.C, who had just been promoted to the Serie A, and moved on to Club Leon on December 24, 2015. He currently plays for New York City in the Major League Soccer, who confirmed signing him on 15 February 2017.

At the age of 33, Madson Formagini Caricade has a height of 1.57m; this means that he is 5 feet, 2 inches tall. He was born on May 21, 1986, and began his football career in the youth ranks of Volta Redonda in Rio de Janeiro, Brazil.

From there, he was hired by Vasco da Gama to play in the attacking midfield position. Though he played well for them, he still had to run down his contract in January 2009. After his contract expired at Vasco, he joined Santos, where he remained till 2018. During this time, he enjoyed loan spells at Atletico Paranaense and Al – Khor in Qatar.

In December 2018, he returned to Brazil with Fortaleza, who had just gained promotion to Serie A. He is still plying his trade at the club and is currently enjoying a decent run. He is without doubts, one player we can’t afford to ignore on this list.

Elton Jose Xavier Gomes stands at 1.54m, which puts him at an incredible height of 5 feet 1 inch. He currently plays as an attacking midfielder or left midfielder for Clube de Regatas Brasil in the Brazilian Campeonato Brasileiro Serie B.

He started his football career with Corinthians in 2004. After enjoying a loan spell at Sao Caetano in the 2006 season, he left Corinthians in 2007. He signed for Steaua Bucuresti in 2007 but did not stay there for long. That same year, he moved to Saudi Arabia outfit, Al – Nasr, where he stayed till 2009.

From Al – Nasr, he went gallivanting around, signing for a series of club sides which include Fortaleza, Dubai Club, Sport Recife, Al – Fateh, Mesaimeer, Al – Qadisiyah, before finally settling down at CRB. He tops our list of the shortest footballers in the world.