12 Best WWE entrance songs of all time: Then, Now, Forever 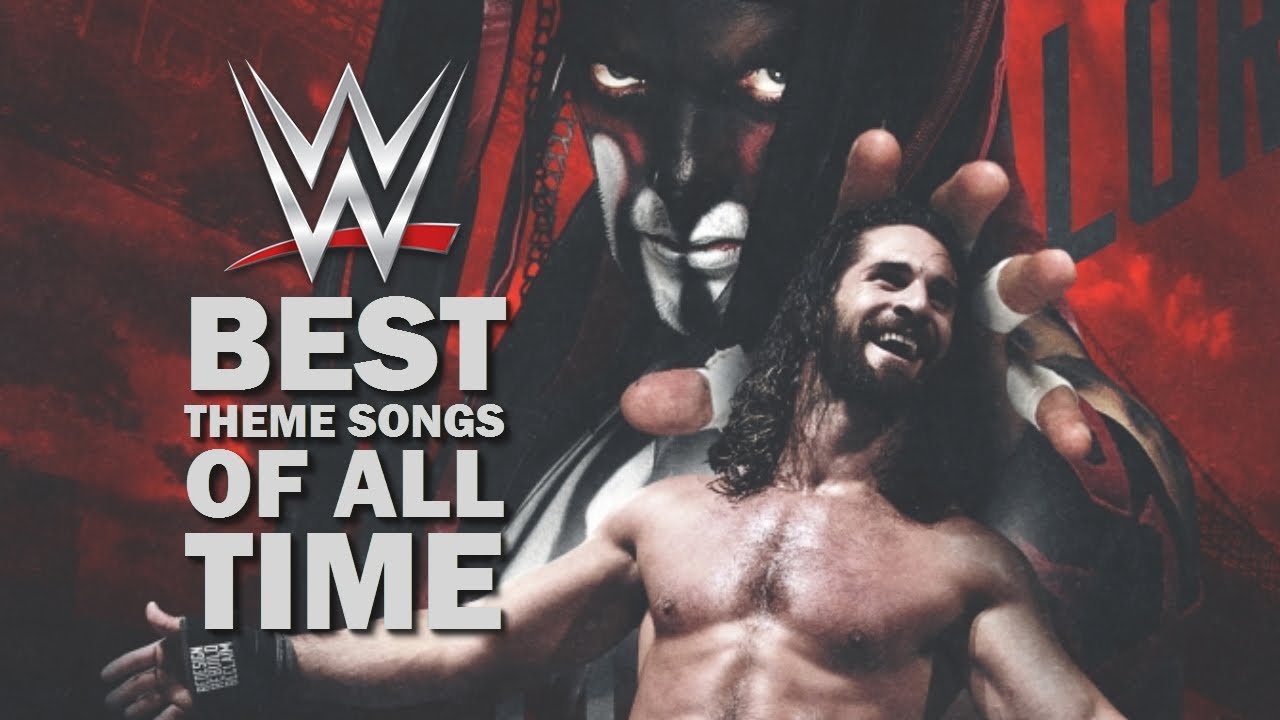 A crucial part of being a popular sports entertainer is generating proper crowd reactions from the moment you enter the scene. And when it comes to getting fans pumped up about the upcoming segment, there’s no substitute to best WWE entrance songs of all time.

WWE theme songs define the personality of a wrestler. Since the inception of Monday Night Raw back in 1993, WWE has been adding obligatory theme music to accompany every wrestler’s entrance. This way, long-term viewers get tied down to these songs, and every time they hear it, they instantly recognize who’s coming to the ring.

Today we at SportsZion have put together a list of 12 best WWE theme songs that instantly triggers huge fan cheers throughout the arena. Take a look.

Theme music plays an essential role in building WWE superstars’ characters. Just like the Undertaker’s ominous dongs that set the supernatural atmosphere in the venue. Be it a Wrestlemania entrance or a typical house show entrance, WWE theme song sets the mood for the viewers. Without further ado, let us begin with our number 12th entrant.

Mick Foley was a strange yet intriguing wrestler. Because of his hardcore style of wrestling, Foley was a fan favorite in the Attitude Era. Apart from his primary persona, Foley also portrayed three different characters, namely Cactus Jack, Dude Love and the most admired Mankind. His fall from the 30-feet hell in a cell cage still remains one of the most iconic moments of WWE’s history, if not the most.

Foley’s WWE music starts with a car-banging noise, which perfectly depicts his high risk-taking capabilities. Whenever fans heard this sound, they knew they were in for some hardcore actions. Thus fans get instantly invested in the segment.

Finn Balor is an exciting wrestler who’s still going strong in the yellow brand. The first-ever Universal Champion had his moments in the main roster and is now assisting the budding talents in NXT. Considering his in-ring skills, he might be a bit unlucky in grabbing the chances. His face-painted devil persona was well-received by the audience.

Just like his finishing move Coup de Grace, his WWE stage entrance is also eye-catching. The theme song, titled catch your breath, does justice to its name. It does take our breath away, especially when Balor performs synchronized moves up in the turnbuckle.

Shinsuke Nakamura’s entrance music, The Rising Sun, is so damn good that it checks all the boxes of top-notch theme music. As the violin plays around light drum beats, the crowd end up humming the entire song and creating the flawless backdrop for Nakamura’s entrance. The music has a sense of elegance and grace which is a perfect reflection on Nakamura’s in-ring actions and makes it one of the best WWE entrance songs of all time

Coming from the land of hardcore hitting, Nakamura signed contracts with WWE in 2016. Before that, he was one of the leading stars in New Japan Pro-Wrestling. The two-time former NXT champion is having a successful run in the main roster with multiple championship reigns.

The Queen of Stratusfaction is perhaps the greatest WWE Women’s Champion of all time. During her days, the Hall of Famer of 2013 class had a record 7 title runs. Trish was the face of WWE’s women’s locker room for a long time. Long before the women’s revolution, she was one of few proper women wrestlers when the women’s roster lacked in-ring talents.

The sexy smile at the beginning of her WWE music indicated the audience about the upcoming visual treat. Stratus really provided 100% stratusfaction for the ones watching live with her looks and personality. Whenever Her music hit the mic, viewers especially the male ones used to get super excited, and you know why.

Mr. McMahon’s on-screen misbehaviors and firing threats to his wrestlers made him the biggest heel of pro-wrestling. He was the perfect antagonist in Steve Austin’s blue-collar heroics during the ever-popular Attitude Era. McMahon’s suited appearance, his trademark walk and mic skills were a non-stop reminder to his ownership of the company.

Even Vince McMahon’s entrance song painted a similar picture. The track is full of taunts and jibes towards the fans. At one point, it calls the fans puppets while reminding them they have No Chance of getting rid of him. The second claim turns out to be a true one as there’s no sign of a new chairman anytime soon.

The song, Broken Out of Love, was originally written by British musician Mark Crozer. WWE purchased the rights and used it as Bray Wyatt’s theme song. Amidst a darkened arena, when Bray came out with his acquaintances holding a lantern surrounded by flashlights from spectators, it felt surreal. And the ambiguous song goes perfectly with it.

WWE songs written in the early 2000s were mostly pretty bad. However, Edge’s song stood the test of time mainly because the Rated R superstar did, too. The Ontario native had an illustrious career with the company before being forced to retire due to a neck injury.

However, when Edge returned in this year’s Royal Rumble, the iconic “you think you know me” line changed the ambiance of Minute Maid Park. Listening to Edge’s theme song after nearly a decade was a trembling moment for the fans. It’s Edge’s charisma that makes his title song one of the best WWE entrance songs of all time.

In the 80s, there wasn’t a pair bigger in the WWF than The Mega Powers – Macho Man Randy Savage and Hulk Hogan. And, when the two feuded, it was the showcased event in mid 80’s wrestling. Being a second-gen wrestler, Macho Man had wrestling running in his blood.

From his entrance music to his finisher, every part of Macho Man’s performance showed elegance. With the slice of classic Elgar, Randy’s entrance music was one of the best in his era. Sadly no longer with us, his theme song now has even more poignant qualities for the wrestling fans.

Goldberg’s entrance theme is as distinctive as the wrestler himself. Bill emerges from the locker room and makes his way onto the ring while camerapersons follow him throughout the path. Arising from a roll of fireworks and taking his pose while fans chanting his name during the whole process, Goldberg’s entrance into the ring is a real masterclass just like the athlete himself.

During his career, Goldberg had several theme songs that signaled his entry into the ring. The most popular among them was a composition called “Invasion” by Jean-Yves Rigo and Christian Poulet. This piece of music has been used since his WCW debut and later exported to WWE.

Hulk Hogan’s all American screen presence made him a household name since the mid-’80s. He is undoubtedly the first megastar of wrestling entertainment. Without the Hulkster, WWE’s path to global success would not have been this easy.

Hogan’s theme song literally translates what he is fighting for, which is America. This dose of patriotism, along with Hogan’s portrayal of an American cult hero, was a huge success back in the days. The song is carefully crafted, every word is diligently chosen which makes it one of the leading contenders for the best WWE entrance songs of all time.

During the late ’90s, whenever the show attendees heard glass shattering sound, they instantly knew that things were about to get real. The first three seconds of Austin’s music was enough to get the fans on their feet with overflowing excitement. Steve Austin, the chief protagonist of the Attitude Era, regularly ruined the evil plans of Mr. McMahon. This feud was the highlight of the era.

The composer of the tune, Jim Johnston, said, “I had difficulty creating a glass break that felt violent enough. However, the glass break ended up being a combination of three different glass breaks, someone falling downstairs and a car crash all mixed together.”

The Undertaker – a name so popular that even non-wrestling viewers have also heard. During his three-decades-long career, the Phenom has achieved unimaginable heights. The considerable amount of credit behind the success of the deadman persona belongs to his unsettling WWE theme song.

When the bell tolls along with the church organ tune and lightning cracks, the environment inside the arena changes quickly. Then the Undertaker slowly emerges from the smog and sends shivers down our spines. This supernatural entrance played a vital role in establishing the character back in 1990.

So, according to our perspective, these are the best WWE entrance songs of all time. If you have any other name on the top of your head, do let us know by commenting down below. We, at SportsZion, would love to hear out your choices.