Attacking Trios has been the most attractive element in the great carnival of Football. Fans huddle up in the stands, unanimously roaring the names of their favorite trios. Marvelous passing and unbelievable ball control is the framework. However, a brilliant understanding amongst the players is the key to such a formidable performance. Watching, an attacking trio in action is a treat to the eyes and satisfaction of the spirit of football. Over the years, football has witnessed numerous of such trios. Three players, tossing the ball through the field cohesively, toying with defenders and getting it behind the line, perfection redefined. Below, we have tried to assemble ten of the finest attacking trios, football has ever witnessed.

In 2014, Barcelona assembled one of the most deadly forward trios in the history of soccer. Messi, Suarez, Neymar, commonly known as the MSN trio accounted for a total of 130 million pounds. However, the money paid off and this ternion went on to be the most reliable and efficient the game had witnessed in a long time. Hailing from Argentina, Uruguay, and Brazil, MSN earned the nickname of ‘death trio’ because of their crushing performance against any team. 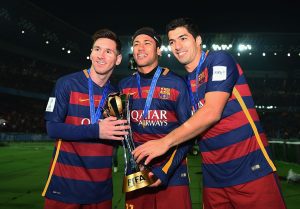 Neymar’s surreal ball control complemented by Messi’s agility and Suarez’s acrobatic finishes, the threesome bagged a total of 122 goals in their first season. They led Barcelona to the title of La Liga for two consecutive seasons of 2014-2015 and 2015-2016. The trio bagged 102 goals together surpassing the record of Messi, E’to, and Henry of 100 goals, making them the highest-scoring triumvirate in the history of the Catalan Club. They bagged a shocking 131 goals in their second season and yet another staggering 111 goals in their third season. However, Brazilian winger, Neymar was bought by Paris Saint Germain putting an end to the ‘death trio’. In their time together, the MSN trio also bagged two European Cups and an international title in the Club World Cup 2015.

Earning the nickname of ‘GreNoLi’, Gunnar Gren, Gunnar Nordahl, and Nils Leidholm are to date, the most formidable trio of the game in the history of Sweden. The triumvirate led the country to Olympic Gold in the year 1938. The trio alone scored 12 of Sweden’s 22 goals in 4 games throughout the tournament. However, the fans were deprived of watching these fantastic three play together in the World Cup. Gren and Leidholm managed to reach the final in 1958 but Nordahl was too aged to continue. Sweden lost that final 5-2 to Brazil. 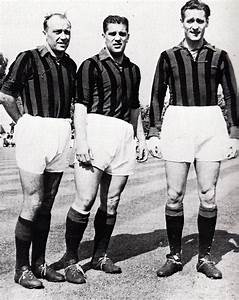 However, the forwards played together for Milan from 1949, leading Milan to the title in 1951. It was Milan’s first break since 1907. Grenoli scored a total of 127 goals in their first two campaigns. Gunnar Nordahl’s record for the number of goals scored in a season of 35 goals was broken by Higuain Gonsalvez, 66 years later. The entire trio has reserved a place in Milan’s Hall of Fame.

Referred to as the ‘Trio Magico’ of Juventus, Boniperti, Charles, and Sivori shared the attack of Juventus for 4 seasons, from 1957-1961. During this time they won, 3 titles and 2 cups and displayed exquisite techniques in their play. The trio bestowed a unique playing style during their time. They raced forward together until they had a lead and once secured a considerable lead, Charles assumed the position of a Centre Back from Centre Forward. 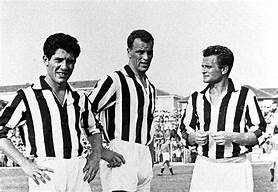 Each of the players was Seria A top scorer at respective times. Boniperti earned a place in the Italian Hall of Fame. Charles was voted Seria A’s greatest Foreign Player in 1997 over Maradona, Zidane, and others. Sivori went on to be the first player to win the First Ballon d’Or while playing for the Club. This explains that besides being excellent team players their individual exploits were uncountable.

This trio hails from Real Madrid’s most efficient Galacticos with legends like Figo, Beckham, and Fernando Morientes featuring in the team. The ternion comprising of the Frenchman, The Brazilian, and The Spaniard, gifted the Bernabeu with the best football they had witnessed so far. With Zidane artistically lining up the attacks, Raul and Ronaldo scored over 39 goals in their first season and were set to break records. 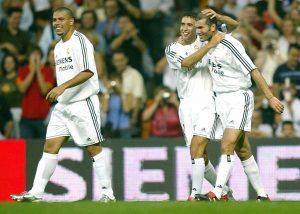 However, Valentino Perez’s controversial sale of defender Claude Makelele left the team unbalanced. Zidane’s growing age and Ronaldo’s deteriorating knees served as a sudden halt to the trio’s expectations. However, the least likely to outshine the other two, Raul, had a considerably longer career at Bernabeu retiring in 2010. Raul went onto win the Champions League with Zidane. Raul retired with a total of 6 titles, 3 UEFA Cups, and a total of 741 caps for Real Madrid, second to none. The trio that cost 123 million euros to assemble could bag but one La Liga title in 4 years.

The Trio scores a perfect ten on the list of perfection. Puskas’ brilliance on field with the ball and Kocsis’ artistic dribbling makes these two prolific players for the national team. Their game, usually regulated by the experienced Hidegkuti was unique and defenders would be but mere spectators when they raced into the box. Hideguti’s pinpoint pass into the box followed by Puskas’ finish is what made them two the most deadly strikers of the game. 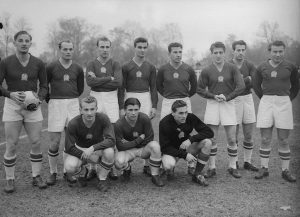 This would be an unconventional addition to the list as many might argue that neither of these three was strikers but midfielders and was overshadowed by Dick van Dyke. However, the trio displayed surprising skill and won 6 titles and 3 consecutive European cups between 1965-1973. Cruyff was the first to win the Ballon d’Or more than once originally ending up winning it thrice. Swart earned the title of Mr. Ajax after playing for the team for 17 years. The world was again denied their trio at a World Cup Final as Swart retired before the 1974 World Cup. Out of three, two have already died with Swart still living. 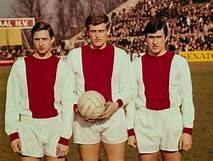 The Holy Trinity of Manchester United, this trio was by far the best that English football had ever witnessed. They had scored 665 goals in 1600 games for the Reds with a record for 46 goals in 42 games. The trio led the team to win the title twice in their brief 4 season partnership and also helped the Red Shirts bag one European Cup in 1968. All of them won the Ballon d’Or in a space of four seasons. 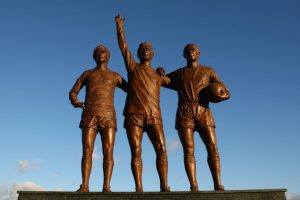 George Best is arguably the best player that the English Isles has ever produced. Best’s name earned him the popular saying,“Maradona good, Pele better, George best.“The iconic trio comprising of Best’s finishes and Law’s passes juxtaposed with Charlton’s spellbinding gameplay fortifies their contribution to English football. Outside Old Trafford is a statue of this Holy Trinity to commemorate their friendship and immortalize the bond they shared.

Rivaldo, Ronaldo, Ronaldinho,or the 3Rs were the most formidable and artistic attacking trio that Brazilian Football had witnessed. Their achievements were second to none but the great iconic trio, Pele, Pepe, Coutinho. The 3Rs never played club football together as Rivaldo played for AC Milan, Ronaldinho for Barcelona and Ronaldo for Real Madrid. The trio performed together at the national level. They led the national team towards various titles and cups. 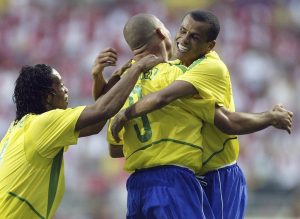 They earned a total of 269 caps scoring 130 goals. In 1999 they led their national team to win the Copa America scoring 11 goals in 6 games. They marched further in 2002 World Cup Tournament. The mercurial trio scored 15 of 18 goals in just 7 matches thereby lifting the cup once again.

A Brazilian attacking trio that has survived the test of time. The trio together has played for over a decade at the Santos winning 21 trophies in total. The count comprised of 6 national trophies and 2 Copa Libertadores. Their total goal count stands at 1418 goals in 1800 appearances for Santos. Pepe scored 405, Coutinho scored 370 and Pele overshadowed the other two by scoring 643 goals on his own. The trio was feared by everyone else on-field owing to their deadly pace and finishing. In the meantime, the triumvirate also bagged 5 World Cups fortifying Brazil’s place as a top contender in International Football. 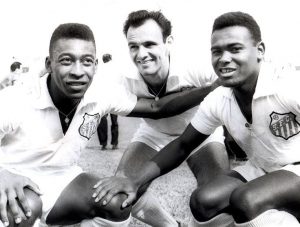 This trio has been considered to be the greatest attacking formation of all time. They fromed the original Galactico in Real Madrid. The attacking trio together went on to play together for a period of six years. They won the title 4 times and also won 2 European Cups in that time. They achieved 40 goals with Puskas escalating to a cracking record of 706 goals in his entire career. Gento moved on to be voted the most decorative player of the Champions League. Gento appeared in 8 League finals winning 6 of them. Puskas won the Champions League 3 times and Di Stefano won it 5 times. All of these three have been voted best players of all time and their moments in the game shall continue to relieve forever. 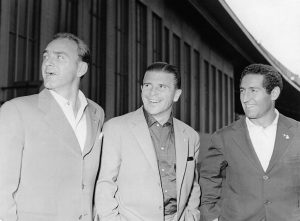 Greatest Attacking Trio of All Time.