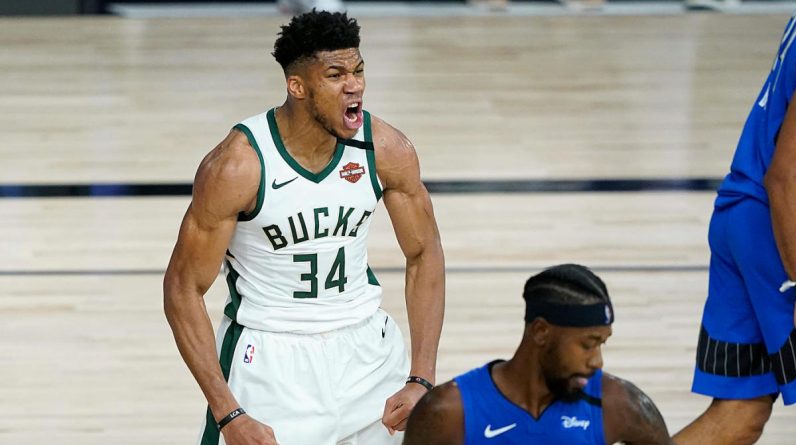 While setting their foot in Conference Semis, another awesome news was waiting for the Bucks camp as their star performer Giannis Antetokounmpo wins DPoY award in a landslide victory.

Bucks coach Mike Budenholzer broke the news to the Greek power forward that resulted in a jumping celebration. The whole team was rejoiced with this news ahead of their Game 5 fixture against Orlando Magic.

Giannis got a total of 432 points, which is more than double of second-placed Anthony Davis (200 points). Out of 100 voters, 75 of them kept the Greek Freak as their first choice for the award.

Most of us saw it coming as Giannis led the best defensive team in the 2019-20 NBA season. Averaging 13.6 rebounds, 1 steal and 1 blocks per game, there was simply no match for the current MVP.

“At the end of the day, when you go out there and compete and when you have guys behind you and next to you that compete as hard, awards like this can come,” Giannis said after hearing the news. “I think it’s been my best year, but you can always get better. You can always improve.”

Giannis is also one of the leading contender to win the MVP award this year. If he does that, he will be only the third player in the history to win MVP and DPoY in the same season.

The Greek Freak is the 2019-20 @NBA Defensive Player of the Year! pic.twitter.com/HPfyMdK7bW

Milwaukee Bucks squad as well as others from the sports community gave their reactions to this news. Everyone was full of compliments for the No. 34 of Bucks.

Legendary center Shaquille O’Neal said, “That man is defensive player of the year now, I got to show that man some respect.” We know Shaq usually doesn’t praise current players much. But, when he does, he makes sure his praises are directed to the right man.

“That man is Defensive Player of the Year now, I got to show that man some respect” –@SHAQ pic.twitter.com/2Js3bJzde0

Congratulations to Giannis on getting the DPOY…on the other hand watch out for a Pissed off AD because he got ROBBED!!! Some media people getting caught up into those deep statistical numbers instead of evaluating with the EYE TEST. Carry on…

Does Giannis really deserve it? Tell us your thoughts by commenting down below.

Luka Magic is in the air as Mavericks takes down Clippers in Game 4
Nate Mcmillan sacked as coach at Pacers camp.