Lionel Messi has sent the footballing world into overdrive after telling the Barcelona board that he wants to leave and a transfer fee would not be required.

He took advantage of a clause in his contract which allows him to unilaterally terminate his agreement and sent a certified letter to the club stating his intention to leave. The clause was supposed to expire on May 31 but his lawyers successfully argued that the prolonged season due to the COVID-19 break rendered this date null and void.

The 33-year-old has been highly critical of the way the club has been run in recent years and has not hidden his displeasure at the fact that he has not lifted the Champions League for the last five seasons, with the Blaugrana suffering ignominious exits in each of those tournaments.

The latest embarrassment came when Bayern Munich walloped Barcelona 8-2 in the Champions League quarterfinal and this led to the termination of Quique Setien’s contract and the appointment of Ronald Koeman in his stead.

The Dutchman has hit the ground running and identified his plans for the future, explicitly telling four players including Arturo Vidal and Luis Suarez that they are unwanted at the club, while also opening the door for Philippe Coutinho’s return.

Although Koeman might be the right man for the job, his job could be made much harder with the potential departure of Lionel Messi, with his status as arguably the greatest player in history and a bonafide game-changer meaning that he makes any coach’s work much easier.

Inter Milan had earlier been named as a potential destination for Messi, with reports suggesting that his father bought a house in Milan, while the Italian club also ran an advert using his silhouette in China. 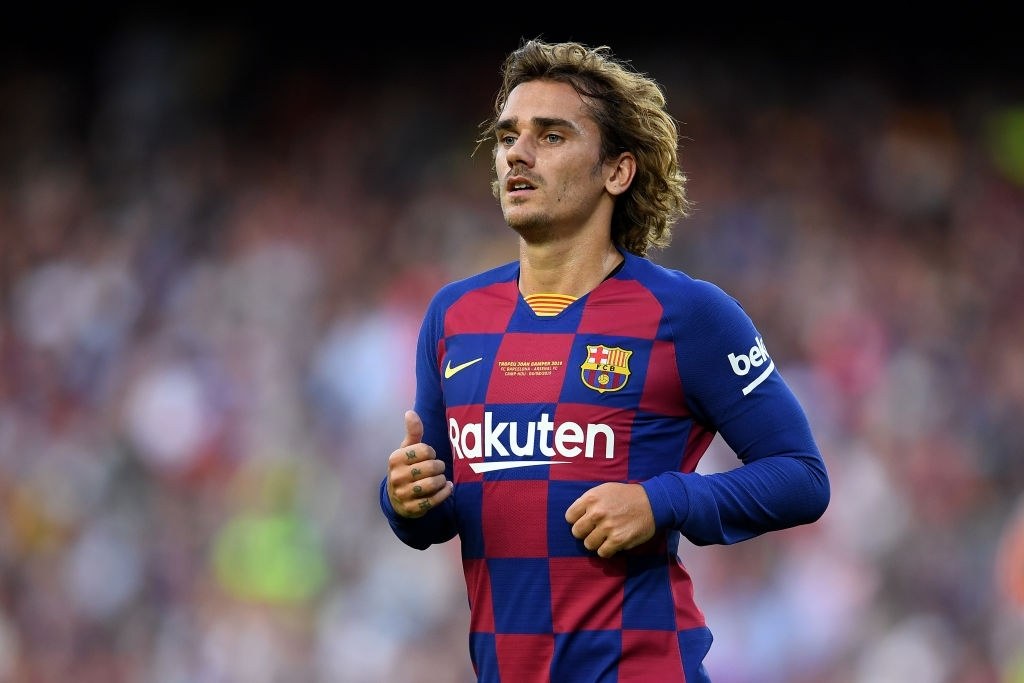 Griezmann struggled in his debut season with Barcelona

It is no hidden secret that Barcelona took in a young Lionel Messi and helped cover his treatment and development from the tender age of 13 and the Rosario native has since gone on to repay the club’s investment hundredfold and morphed into unarguably the greatest player in the club’s illustrious history.

Their partnership has been a mutually beneficial one and under his majestic guidance on the field, Barcelona went on to enjoy unprecedented success, while Messi has gotten immense fame, fortune, and individual honors.

Given how well he has adapted to the city of Barcelona, it was a hugely held belief that the six-time Ballon d’Or winner would retire at the club but recent developments have left serious question marks hanging over this claim.

For starters, Lionel Messi has been disillusioned with the burden of expectation placed upon his shoulders and while his extraterrestrial abilities means that he steps up to the plate more often than not, it is pertinent to note that he is human and there is only so much that he can do.

In the last few years, Messidependencia has reached alarming proportions and what little successes the club has achieved in this time has been down to the abilities of their mercurial skipper.

Despite being surrounded by huge names who are paid humongous salaries, most of his teammates conspicuously go missing when it matters most, leaving Messi to take charge of both creating and scoring goals.

Barcelona sanctioned the sale of Neymar for a world-record fee of £200m in 2017 and rather than spend that windfall frugally, the board proceeded to waste this largess on players who have contributed next to nothing to the club’s cause.

First came Ousmane Dembele for a club record fee but the French international has spent more time on the treatment table than the field and his latest injury could see him miss the entirety of next season, while Philippe Coutinho has not fared much better and put his former club to the sword in the Champions League during his loan spell with Bayern Munich.

The latest marquee arrival was Antoine Griezmann but he had a hit-and-miss debut season at Camp Nou and often looked out of place in the attacking trident alongside Messi and Luis Suarez.

Other questionable transfers by the board in the last five years include the purchases of Paulinho, Arda Turan, Andre Gomez, and Paco Alcacer to name a few, while the highly-rated Arthur was allowed to join Juventus in a player swap for the 30-year-old Miralem Pjanic, further increasing the average age of a midfield badly in need of rejuvenation. 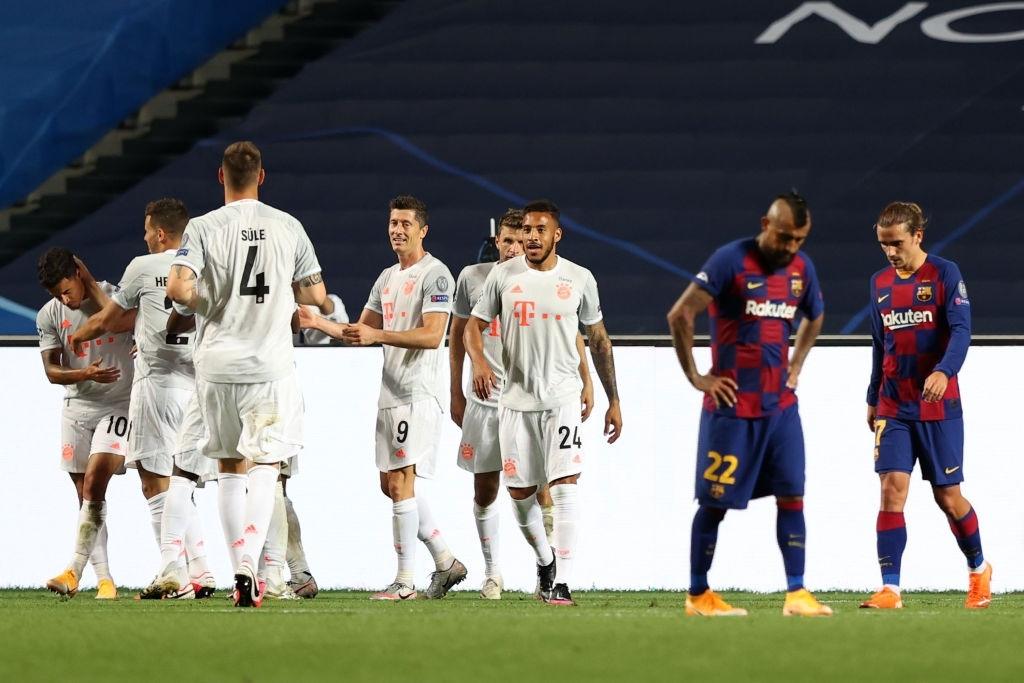 Barcelona got knocked out by Bayern Munich in the Champions League

There have also been clashes between Messi and the Barcelona board in recent months, with the first coming when former Director Eric Abidal accused the players of not giving their all for Ernesto Valverde which led to his sack.

This prompted the normally taciturn Messi to launch a tirade against his former teammate, asking him to specify individual names rather than paint the whole squad bad.

There were also reports of current president Josep Maria Bartomeu hiring a PR agency to tarnish the image of his perceived enemies including Messi and Pep Guardiola, while there is an underlying feeling that he did not do everything to fulfill Messi’s wish of bringing Neymar back to the Camp Nou last summer.

When the club asked the players to take a pay-cut in light of the COVID-19 pandemic in April, reports came out claiming the players were unwilling to accept the offer, while Messi took the liberty of explaining that this was not the case.

The Barcelona board has been rocked with a raft of accusations in recent times and there have been a spate of resignations and counter-claims throughout the year, while calls are mounting for Bartomeu to resign from his position as president.

There is also the small matter of the Champions League and while Messi might be highly successful with four titles to his name, his status as one of the best players of his generation means that he should be competing for the title every season.

However, this has not been the case and the Barcelona number 10 has gone a whopping five years without lifting Europe’s top club honor and more painful has been the disastrous ways the Blaugrana have been eliminated in each of those campaigns.

They twice let healthy first-leg advantages evaporate in the return fixtures, with AS Roma overturning a 4-1 deficit to qualify on away goals, while Liverpool infamously won 4-0 in 2019 after losing the first leg 3-0. In 2017. Juventus trashed the Catalans 3-0 on aggregate but the most embarrassing was, however, the 8-2 whitewash handed by Bayern Munich in the just concluded campaign.

Despite the huge amounts spent by Barcelona, they are still some way off Europe’s elite – this much was clear in their fixture against the Bavarians – and despite how embarrassing the scoreline was, it could have been much worse had Lewandowski and co. been more clinical.

Barcelona are not close to winning the Champions League anytime soon and in light of this, Messi could be well within his right to ask for a transfer. 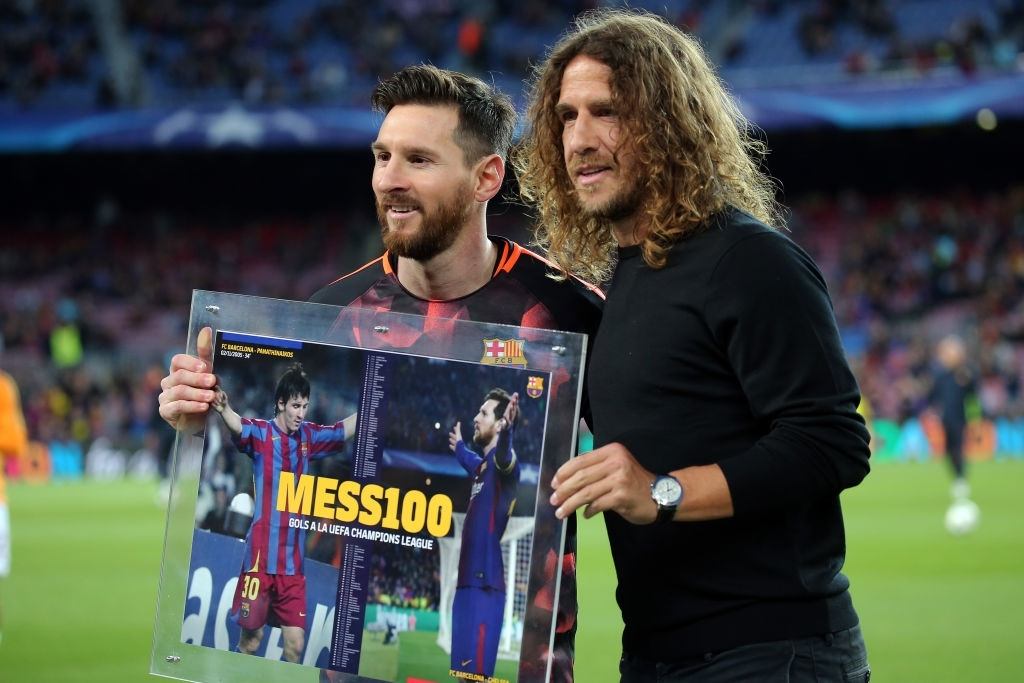 Carles Puyol has expressed his support for Messi

Support for Lionel Messi from the footballing world

Given his immense popularity and status in the world, this latest news on Messi has set the world on fire and reactions have poured in from several dignitaries within and outside the footballing word.

The President of Catalonia Quim Torra stated: “Catalonia will always be your home. Thank you so much for all these happy times and all the great football. We have been lucky enough to share a few years of our lives with the best player in the world and a noble athlete. We will never forget you. Leo Messi, Holder of the St. George’s Cross.”

Former teammate and captain to Messi, Carles Puyol also reacted to the development and took to micro-blogging social media platform Twitter to post on his verified handle, stating: “Respect and admiration, Leo. {You have} all my support, my friend.”

This latest development is sure to send Europe’s top clubs scrambling for their checkbooks and while his huge salary would represent a major stumbling block, this could be offset by the absence of a transfer fee and Lionel Messi would undoubtedly strengthen any club he joins.

In addition to Inter Milan, other top clubs like Manchester City and Paris Saint-Germain have also been linked, with the former offering a reunion with the coach that gave him the platform to achieve greatness, while the latter would see him reunite with his friend and former teammate Neymar in the French capital.

Lionel Messi made his first-team debut for Barcelona in October 2004 and in the last 16 years, he has become the greatest player in the club’s history.

With 634 goals from 731 appearances, he is the club’s record goalscorer, while he has also won a raft of individual honors (including six Ballons d’Or) and is one of the most decorated players in history with no fewer than 34 major trophies won with the Catalans.

There have been speculations in the past that Messi could leave Barcelona but none have ever been as concrete as this and if he ends up leaving the club, he would do so having left an indelible mark on the club’s history.