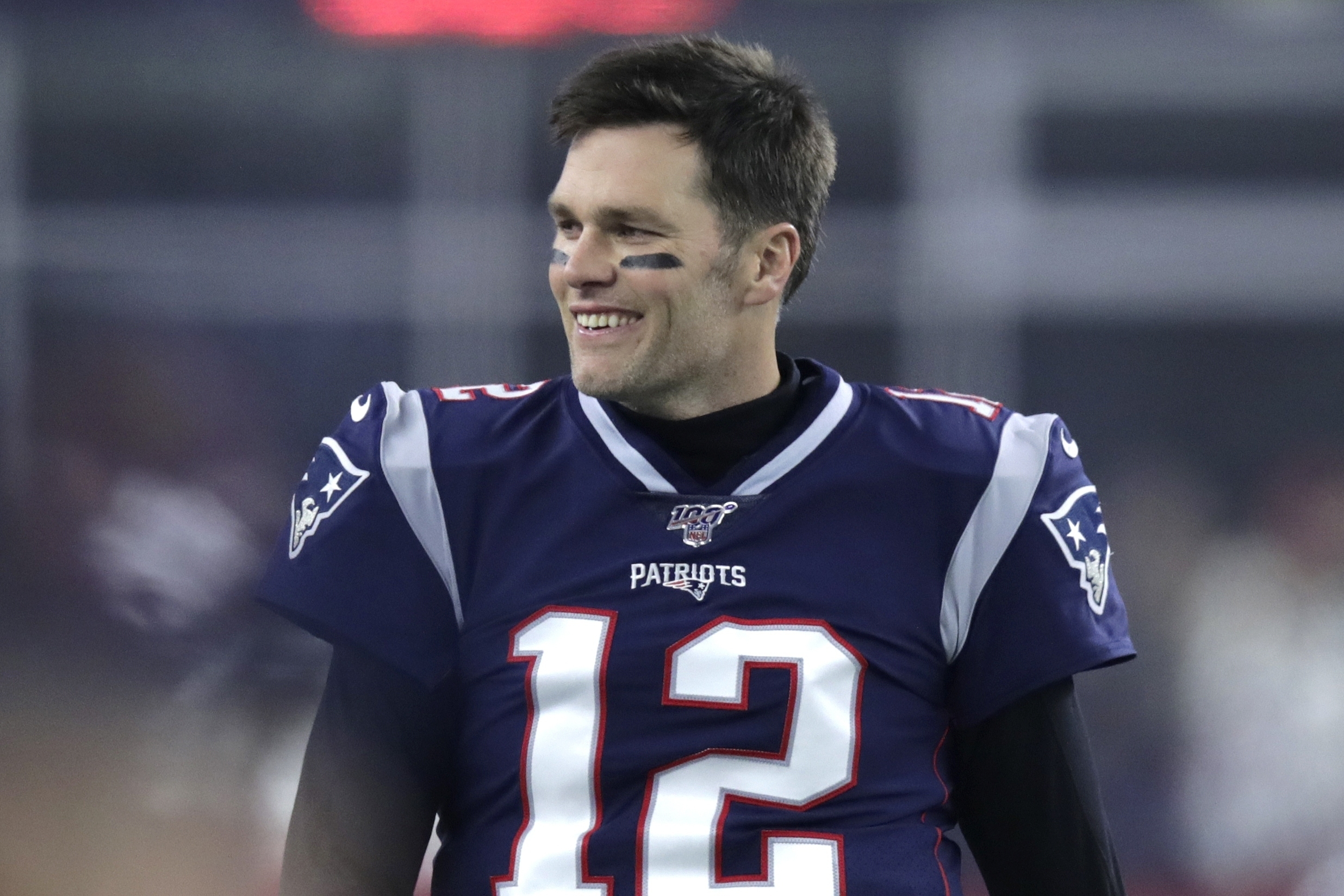 Hardly you will find an American National Football (NFL) fan who does not have a thing about Tom Brady. Everyone wants to know about him. Therefore, Sportszion has dedicated an article on Tom Brady biography, especially focusing on his stats, untold stories on his personal life, net worth, different phases of his career, and it continues.

By the year 2000, he became the record-smashing and undisputed favorite player of that time with his excellence and tactics in the field.

He managed to grasp two NFL MVP awards and four super bowl MVP awards with five wins in the super bowl itself. Being a quarterback, he has assisted his team for seven super bowl appearances.

After all these outstanding achievements, it is reasonably legitimate to place him in the same row with the other legends like Montana, Jerry Rice, or Jim Brown.

Tom’s parents Tom Sr. and Galynn were into sports, and they wanted their children to follow their passion. Tom has three elder sisters- Maureen, Julie, and Nancy, who also became athletes participating in softball, soccer, and Basketball. Following their footsteps, Tommy, as he is known to his family, always cheered his sisters and nurtured the spirit.

His sister shared a memory from their childhood in an interview, “We used to compete for absolutely everything, and we pushed him all the time for better performance. The nightly battles to control the television remote were especially fierce, and frequently the fighting took place with water pistols.” 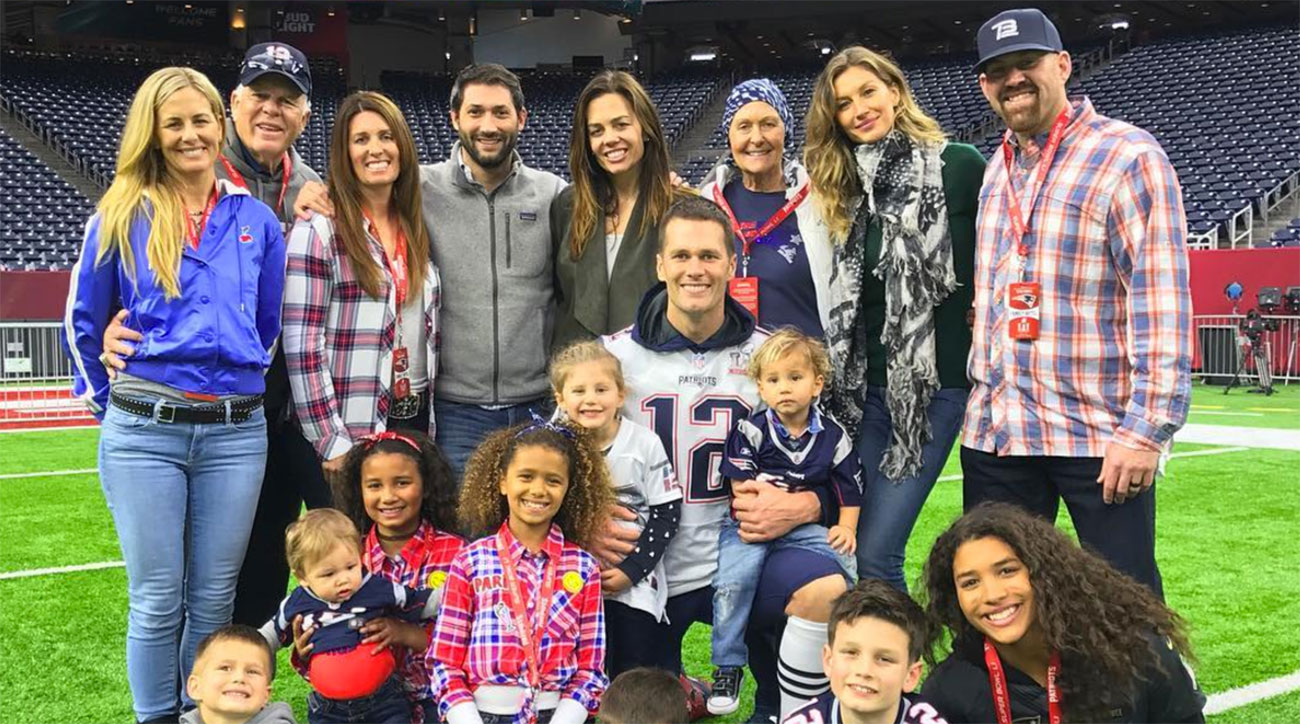 Tom Brady was named as ‘Tom Terrific’ by his fellow teammates and fans. Do we even need to think why he was named this? Not necessary if we go through his matches and scores.

Junipero Serra High School was the place where Tom had his first schooling. He completed his graduation in 1999 with a 3.3 GPA from the University of Michigan. Though Tom opted for a general degree, he also completed his minors in Psychology and Business Administration.

In addition to his work in football and academics, his college resume includes a variety of part-time jobs and voluntary tasks. After he finished his bachelor’s degree, Tom Brady wiped his hands clean of education.

His parents Tom Brady Sr. and Galynn, lived their lives in California. Tom Sr. was Irish decedent, and Galynn inherited mixed nationality from Norway, Poland, and Sweden. They were an insurance agent and a flight attendant by profession. Both of them set a fantastic example of parenthood. Tommy’s sisters Maureen, Nancy, and Julie were no less than him and had the same competitive childhood. Maureen was an All-American pitcher at Fresno State in the 1990’s; Nancy played Basketball and softball at her early age, and Julie belonged to the same genre. It seems that sports run in the genes of this family! 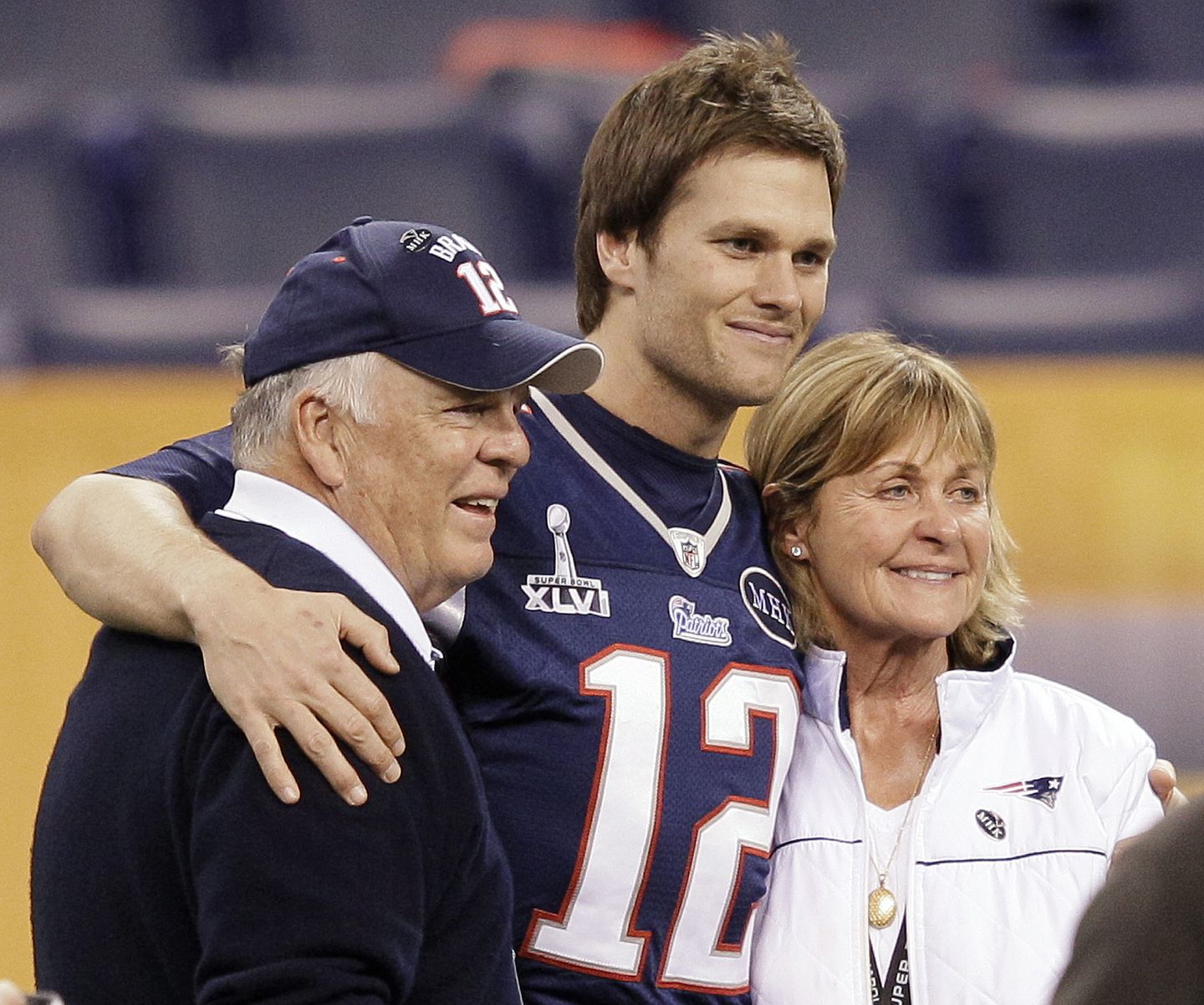 Brady with his parents.    Source: The Boston Globe

His mother is a cancer survivor and Brady has always looked up to her courage and positivity towards life. Whenever he felt a little bit down, he just goes through a quick flashback of her mother’s immense struggle. Surely, a big credit goes to Tom Sr.

This picture sums up a perfect night for my family and team. I am beyond blessed to have the love and support from my parents. My mom and dad were recognized in the pregame along with other families who have fought tough battles with tough illness. These two are the ultimate warriors who have faced these challenges head on and keep fighting. I am so happy they were there together and I thank all the fans who gave them such a warm welcome. I love them so much and I love you all! ❤️???

Tom and his wife Bundchen met through a friend back in 2006, which turned into a ‘Love At First Sight.’ They got married in 2006 with a few people attending the ceremony. Bundchen is a model by profession and quite successful in her career and legitimately makes a ‘Power Couple.’ They have two children, Benjamin Brady, and Vivian Lake Brady. But before Bundchen, Tom Brady dated American actress Bridget Moynahan and had a son together named John. But that did not last very long. 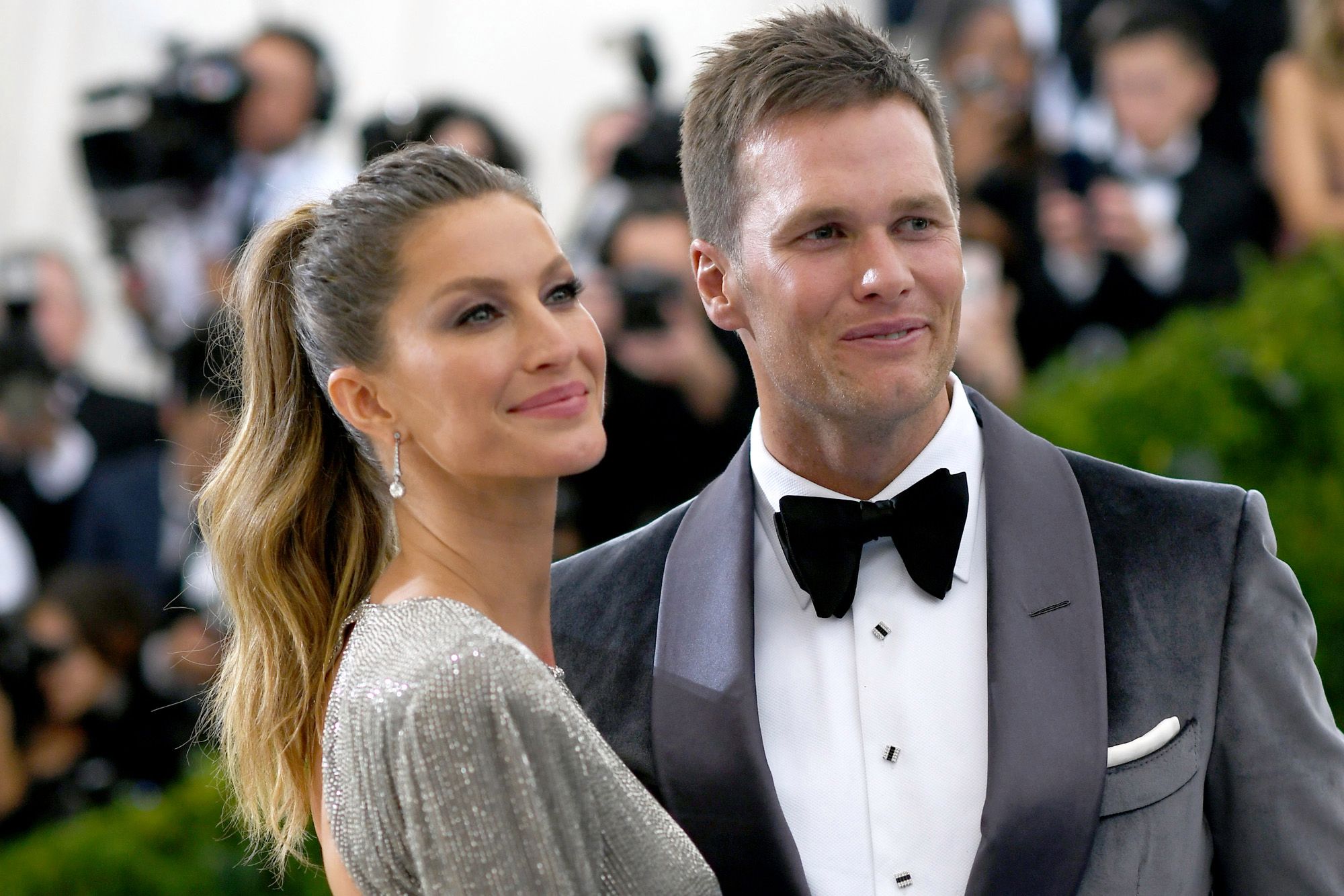 This 1.93 m gigantic player grew his fondness towards football at a very early age. He used to attend every San Francisco 49er game on Sunday with his family and mainly was a big fan of the 49ers quarterback Joe Montana since then. He always thought this team to be his very own. The three-year-old kid was crying the first half for an oversized foam hand, which his parents refused to give. But soon, he started paying attention to everything that Montana was doing. That very game left an everlasting impact on Tom’s mind.

Even while attending elementary school, he also played flag football as a quarterback.

This man completed his 236 of 447 passes (52.8% pf career) in his high school career. He was also well-known to the baseball community for the Montreal Expos. But later, he chose a football scholarship to play for the University of Michigan.

Graduating from high school in 1995, Brady passed on all the opportunities to join the NFL team at the University of Michigan. By that time, he was quite famous and star-player for college football leagues. But surprisingly, he kept himself away from the sports for the first two years of his college and concentrated on his studies.

As a junior, he came back to a particular season and completed 350 passes for 2636 yards and secured his team an Orange Bowl Victory. Thus he secured his place to kick off the big-pro-leagues. 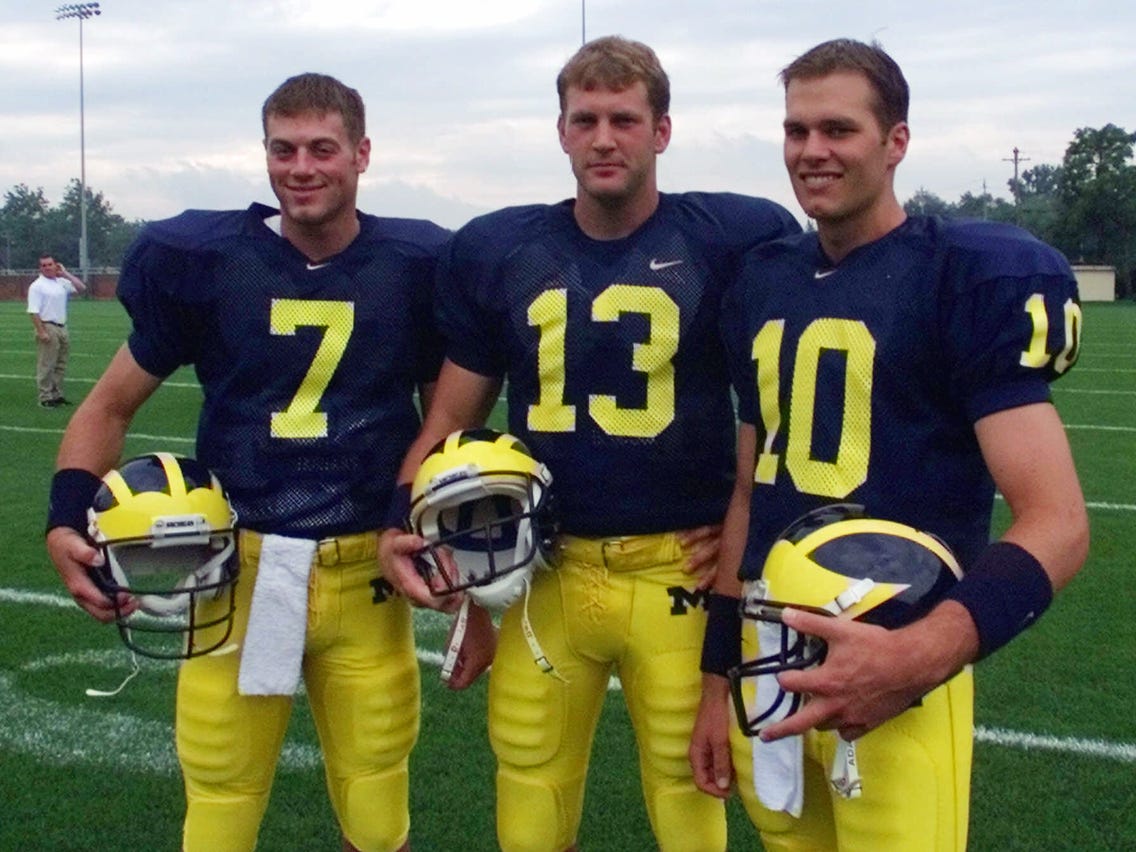 He started his professional career in 2000 when the New England Patriots picked him for the sixth round, mostly as a backup, and got to play only one game in the entire season as a newcomer.

But this did not last for too long as the second season was a different story. Tom got to play as a backup of the regular quarterback for his injury and showed the whole NFL world what he was capable of doing. By the end of the season, the team won 11 of the 14 matches where he was the starting quarterback.

Tom had his first professional contracts with the New England Patriots back in 2000. In 2005, he was signed on by the Patriots for six more years and the whole next year’s season—no wonder the Patriots were drooling over his tactics to take him to the team. But unfortunately, he faced severe knee injury in 2008 and had to skip two NFL drafts.

2014 was the last time Tom was on top of his career. But after their victory against the Indianapolis Colts, Brady was accused of cheating. The incident veiled under for some time but got attention again in 2015. After going through the inquiry process, the authority found out some truths about the accusation, and he was therefore suspended for the first four matches of 2015. But soon, a federal judge abolished the allegation for the short of legal grounds.

This NFL star set a glorious example of his career being a part of the Patriots. After so many ups and downs, he managed to earn a third league MVP award right after his comeback. His records for the Patriots were too wholesome to deny.

In March 2020, Tom shocked everyone by signing a two-year contract with the Tampa Bay Buccaneers. The reason he said behind this decision is the Bucs wanted him so badly and were willing to pay him the top-market money he had not demanded from the Patriots- $30 million per year, which happens to be the double of his current earning. 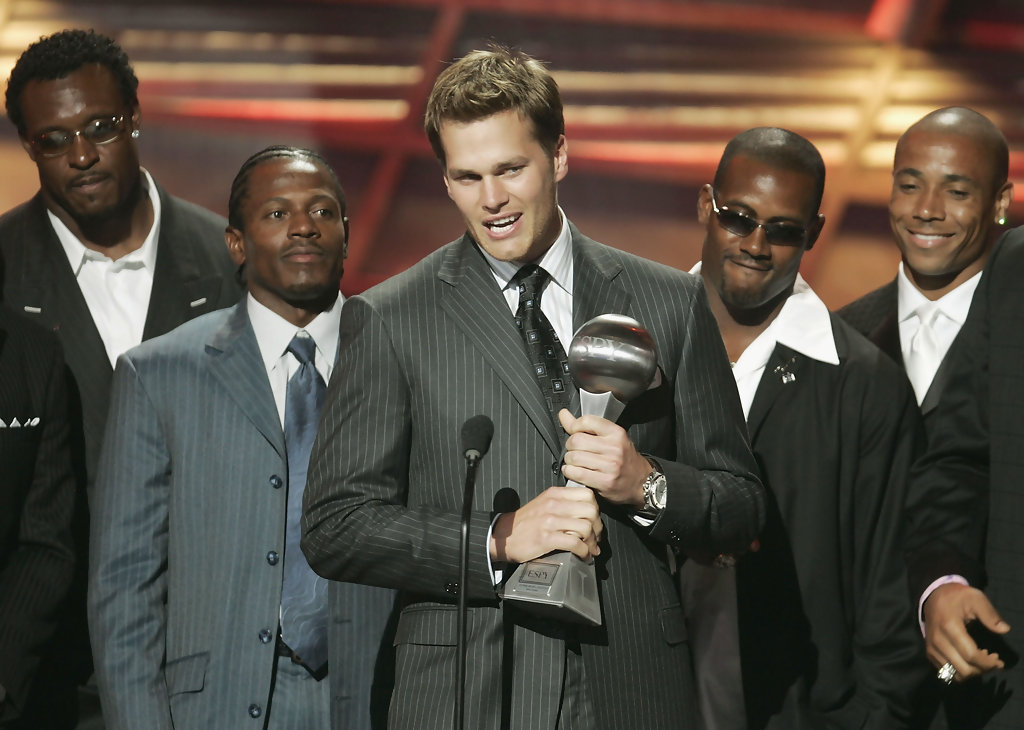 A few setbacks in his career:

Each player has a rival in the game, right? Tom was no different in this respect. Therefore, an article on Tom Brady biography is incomplete without naming his rival.

Peyton Manning was Tom’s biggest rival and they played against each other 17 times. It was not about a game instead of a series of games between 2001 to 2015. Yes, that is quite a long time to hold an old rivalry, but they justified it for sure. 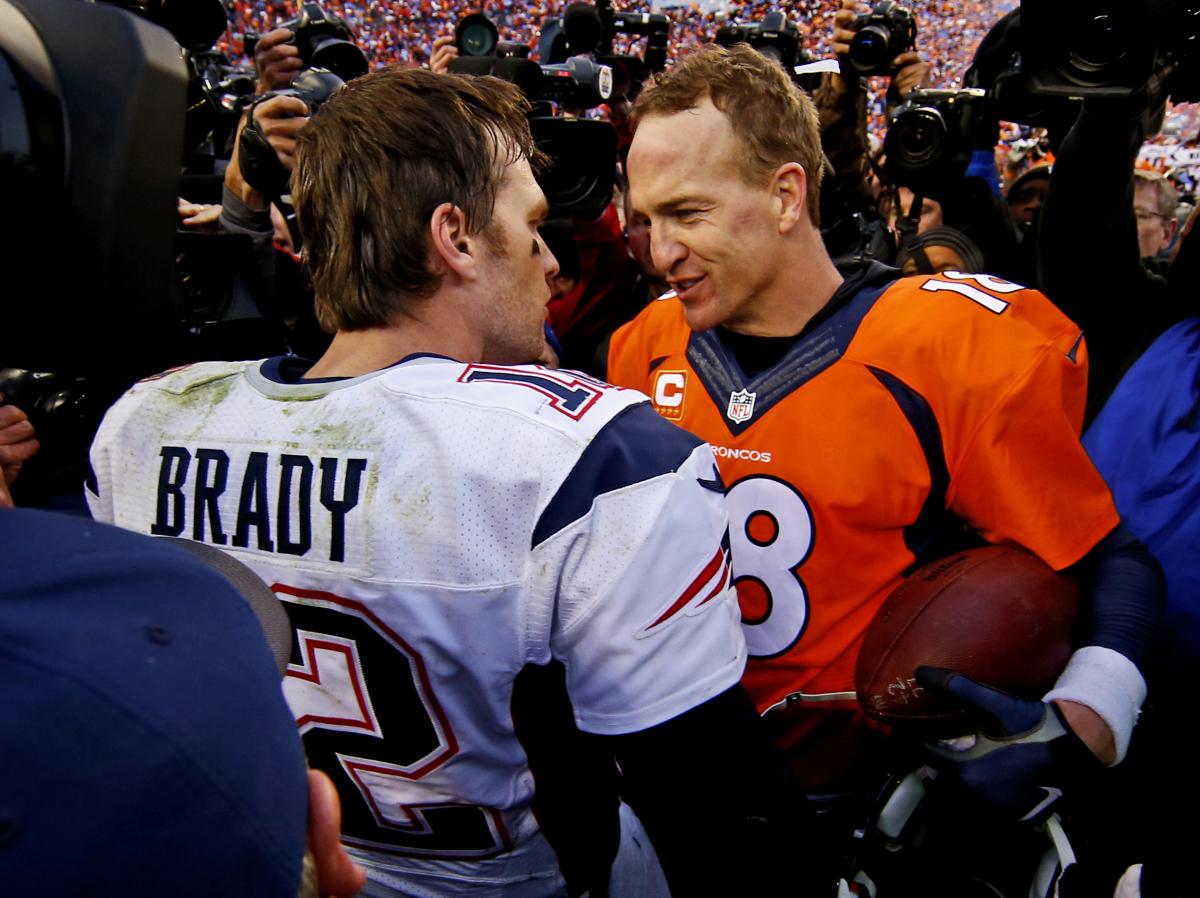 According to Forbes’ annual look at the world’s highest-paid athletes, Brady ranked 81st of that. Currently, he has made partnerships with numerous brands, including Under Armour, Molecule Mattresses, Upper Deck, and IWC Schaffhausen. Recently he was signed to promote a car worth more than $200,000 — and Tag Heuer, the high-end watch company.

(Brady signed a contract extension with the Patriots worth $72 million for 4 years with $48.5 million guaranteed)

Conflicts with his typical wife:

Tom and Bundchen have been married for 11 years. Recently there was a buzz that they are heading towards divorce. Brady admitted in an interview that both of them are having a tough time but that does not mean they are drifting apart. His wife felt that he was not paying proper attention to the household. Brady stated, “She felt like I would play football all season and she would take care of the house, and then all of a sudden when the season would end I’d be like, ‘Great, let me get into all my other business activities, let me get into my football training.’ And she’s sitting there going, ‘When are you going to do things for the house? When are you going to take the kids to school and do that”. But lately, both of them are giving their marriage another chance with dedication.

Throughout the whole life, Brady has nurtured some amazing philosophies to motivate himself and others too.

Praises from the sports world; Quotes on Tom Brady:

Tom Brady is just not a name of a regular NFL player, rather an illustrious example and treat to the eyes of the NFL followers. Well, that’s what we have acknowledged by reading on the legendary Tom Brady biography. Little did this NFL star know about this journey in the first season, where he did not even get to play. The more we see him, the more we get baffled with his charisma and tactics!

Washington team to face Philadelphia at FedExField on 13th September, that too without any fans
Ex-Washington RB Guice accused of rape by two women