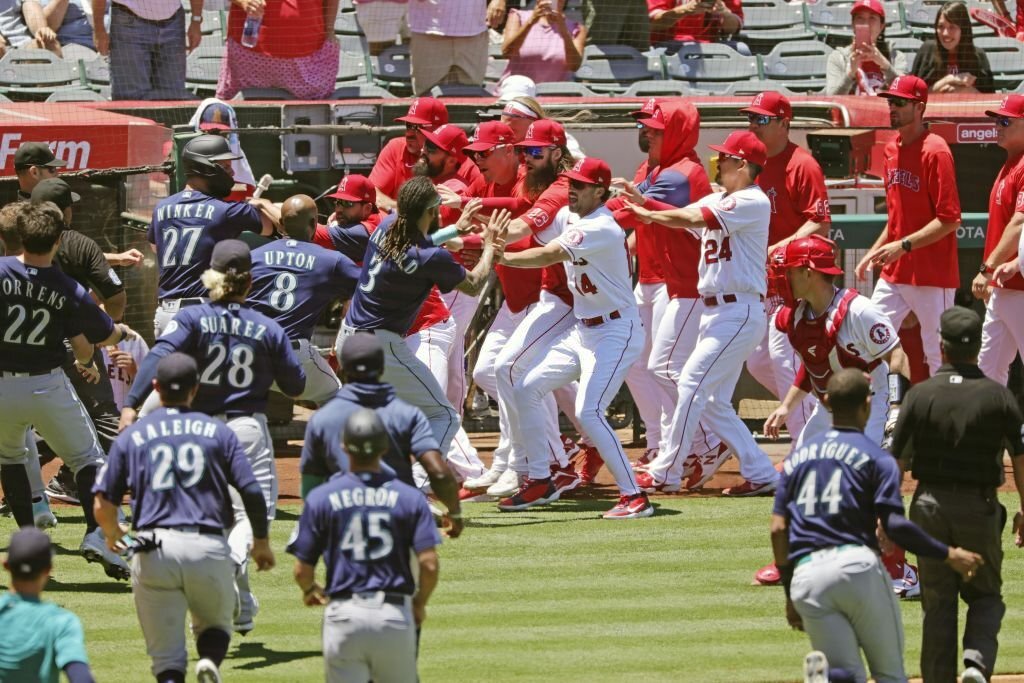 Anthony Rendon got Jesse Winker right in the face 😳 pic.twitter.com/RiBLv9QUCr

After the heated exchanges, an all-out brawl broke out, lasting 6-7 minutes, during which people punched and shoved one another. At one point, the battle got out of hand, and MLB officials had to intervene. Several players and coaches received suspensions as a result of the conflict, although no one sustained any serious injuries.

Who got suspended in the Mariners-Angels game?

The individuals who were suspended are listed below,

Why was Phil Nevin suspended?

Did Jesse Winker get suspended?

The Mariners outfielder, Jesse Winker has been suspended for seven games for both initiating the incident and engaging in combat.

What caused the Angels-Mariners brawl?

Angels pitcher Andrew Wantz hit Mariners outfielder Jesse Winker in the backside with a first-pitch fastball in the top of the second inning. Before moving toward the Los Angeles dugout, Winker, who was obviously furious about the hit-by-pitch, got into a shouting match with Angels catcher Max Stassi and home-plate umpire John Bacon.

At the same time, Winker appeared to be having a dispute with Angels interim manager Phil Nevin. Within seconds, the benches at Angel Stadium were cleared, and a brawl erupted, with punches thrown.

Who got ejected from the Angels-Mariners game?

The brawl caused an 18-minute delay and led to eight players getting ejected from the game. Among the eight players who were tossed out of the game were four Mariners— shortstop JP Crawford, Winker, outfielder Julio Rodriguez, and manager Scott Servais—and four Angels— pitcher Ryan Tepera, Wantz, coach Nevin, and pitcher Raisel Iglesias.

🎥 MLB hands out multiple suspensions to players and coaches from the Mariners vs Angels brawl Sunday https://t.co/RxAzke2WKa pic.twitter.com/7KIjwN5oIk