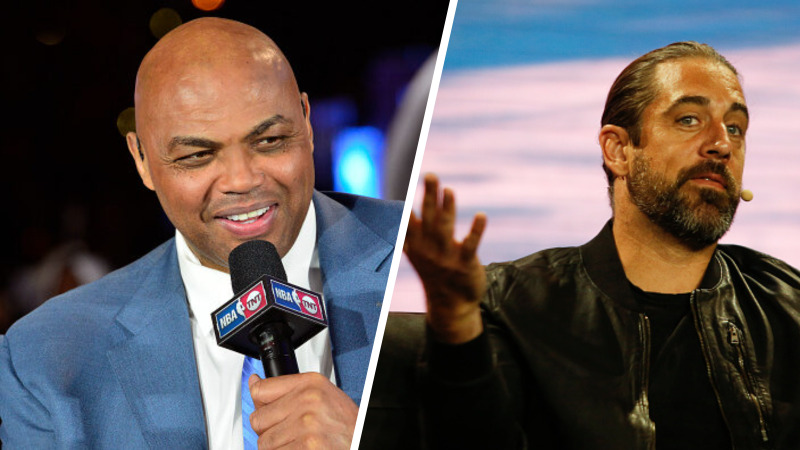 It has become an upward trend for athletes from other sports to try their hands at playing golf on their off days. Aaron Rodgers is no exception when it comes to playing golf as well. Rodgers, along with Tom Brady, won the charity match against Patrick Mahomes and Josh Allen.

The Green Bay Packers’ Quarterback was seen rocking his latest hairstyle and still wants to grow his hair. While playing golf the 6 feet 2 inches tall footballer was seen having a brief conversation with the NBA legend Charles Barkley AKA Chuck. The two of them were pulling each other’s legs in the following conversation. Moreover, at one point Chuck made a bet that if he won he would like to chop off Aaron’s man bun!. Aaron Rodgers confidently accepted the bet!.

Aaron Rodgers made a bet with Chuck that would allow Chuck to chop off his man bun 😂#CapitalOnesTheMatch pic.twitter.com/HEdoLgmd25

The Wynn Golf Club in Las Vegas, Nevada hosted the charity golf match. Both the fans of Football and Golf enjoyed the feud between Brady-Rodgers and Mahomes-Allen. Aaron Rodgers landed the finishing blow by clutching the match with a birdie.

After the match, he stated his thoughts in an interview with CBS Golf, “I felt really good about (the putt), to be honest,” Rodgers said. “Tommy gave me a great read. I heard Trevor and Charles in my head telling me I was going to make it, and I felt good about the line when I hit it, I knew it was going in. It was a fun day.”

Minnesota Vikings’ Adam Thielen opens up about new diet ahead of new season
“I say we should run it back!” Patrick Mahomes demands instant rematch with Tom Brady & Aaron Rodgers in golf course