Jerry Jones supports the inconsistency in NFL crowd rate, mixed opinions of others 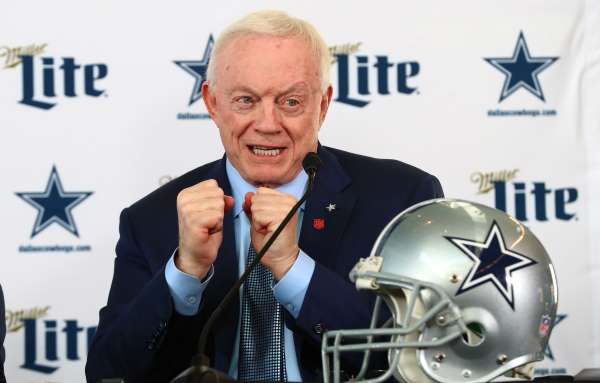 Cowboys owner Jerry Jones always has been on his own track in terms of opinions for his beloved team. A burning topic of conversation is circulating in the NFL, whether it’s fair for some teams to have huge fans in their home stadiums, whereas some failed miserably to possess. Several NFL coaches have already started to worry, but Jerry Jones doesn’t think it’s a problem.

Jerry Jones stated Josh Clark of 105.3 The Fan in Dallas that, “Absolutely (it’s fair). The benefit of crowds is important to sports. On the other hand, is it possible to have great games without it … you saw one the other night in basketball. But it’s fair. We’ve made up our minds this thing isn’t going to be one way or another. Surely, about evening up everything that could be competitive, you’ve got to have to adapt to the virus. Attendance is one of them. To the end that we can get fans enjoying these games with an experience similar to the thing they’ve come accustomed to is a big step in the right direction.”

Some franchises will have fans at games, while others won’t have any at all. The Cowboys want to be at the forefront of bringing fans back to the stadium, whether it’s risky or not.

Jones also has made it clear that he intends to host fans at AT&T Stadium this season. On Tuesday, he added that he has permission from the Governor of Texas to do so. He also dismissed concerns about whether that’s fair or not, saying games can be great with or without crowds.

Other opinions on this issue

Buffalo Bills coach Sean McDermott is speaking out about the NFL’s lack of a cohesive policy on fans attending games in 2020. For him, it’s a completely ridiculous decision. He said, “We control what we can control. I think it’s honestly ridiculous that there will be … what appears to be a playing field that is like that. Inconsistently across the league with the different away stadiums. We control what we can control. That’s gotta be our mindset and that’s how we attack it.”

Sean McDermott feels it is "ridiculous" that fans will be in some stadium, but not others.

Mike Zimmer, the head coach of the Minnesota Vikings, agrees with Sean that it gives an ‘unfair advantage’ to teams that can have fans. On the other hand, Vic Fangio of the Denver Broncos shares the same stance as Jones.

When other major games are following the ‘No Attendance’ rule for this 2020 season as the Coronavirus is still raging in the USA, the NFL didn’t follow other league’s attendance guidelines and decided to give the flexibility of having fans to the individual team if they wish to have.

The pandemic is still on the rise in the USA. Texas has the third-most coronavirus cases in the United States at 580,384 and its 37,434 cases over the last seven days are second-most in the country (per the CDC). The 2,022 case rate per 100,000 for the state of Texas is the 11th-highest in the United States.

“We have the ability to lead the way to a more normal type of activity whether it be economic or whether it be social. This is a great opportunity to do that in a very safe way. We’re very unique in our stadium relative to just space and we’re going to take advantage of it”- Let’s see how much they can withstand with this statement of Jones!

Mackensie’s father disappeared mysteriously, the player leaves training camp immediately hearing this
Frank Reich proved to be the ‘King of Comebacks’ for Colts