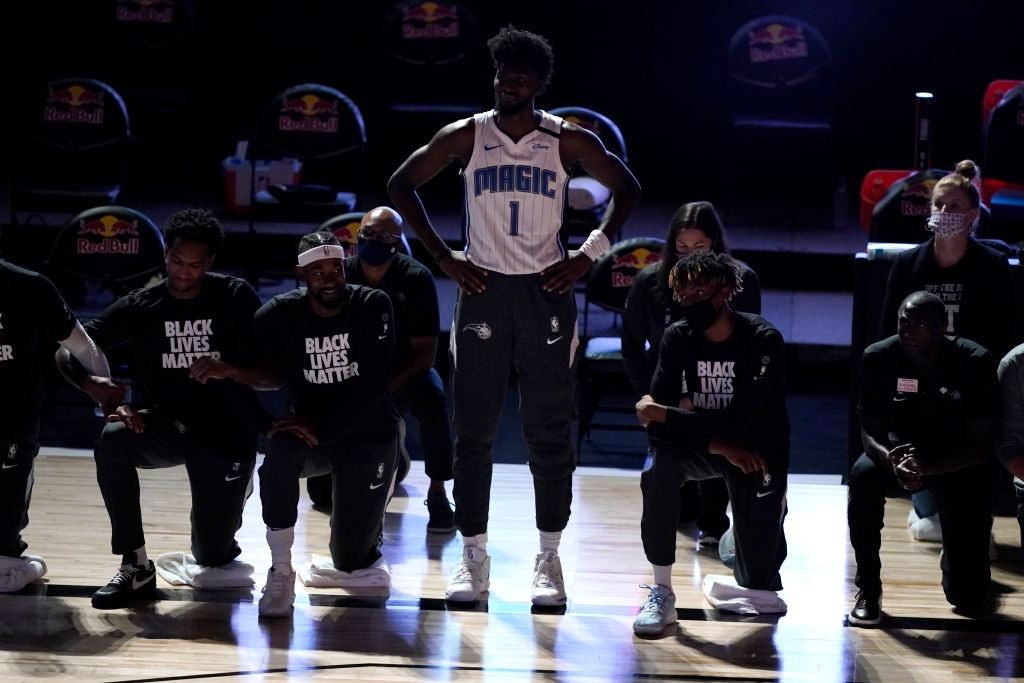 Jonathan Issac was not supposed to see the rest of the season after he suffered from a torn ACL in the same knee which suffered from a heavy injury on Saturday. However, COVID can’t be messing things up for everyone and gave Issac a considerable time to heal during the break.

The forward from Orlando Magic is now featuring in the headlines after he decided to neither wear the ‘Black Lives Matter’ T-shirt nor take a knee during the pre-game BLM presentation. The BLM movement has had rebels in almost all major leagues and Issac was the first player in NBA followed by Leonard from Miami Heats.

They say publicity of any form is never bad, and maybe that is the reason why the player’s jersey is the second most bought jersey after LA Lakers LB James’.

Jonathan Isaac’s jersey sales have skyrocketed after he stood for the National Anthem.

He is now number two in jerseys sales among players only behind LeBron James. pic.twitter.com/1JLwEPtLG8

Issac explains his reason for the decision he took and clarifies saying that he believes in the Black Lives Matter cause and supports the movement. However, he emphasizes that wearing a T-shirt and taking a knee disrespecting the national anthem is not his way to go about a movement. He further stresses the point of personal decision and how everyone shall be allowed to choose their way to react to the situation. He believes that the Gospel and Jesus is the answer to everything that is wrong in the world and to end racism, it isn’t necessary to disrespect the country.

He further states, “Each and every one of us do things that we shouldn’t do and say things that we shouldn’t say. We hate and dislike things that we shouldn’t hate and dislike, and sometimes it gets to a point where we point fingers, whose evil is worse, and sometimes it comes down to whose evil is most visible. So I felt like I wanted to take a stand on, we all make mistakes, but I think that the Gospel of Jesus Christ is that there’s grace for us, and that Jesus came and died for our sins and that if we all come to an understanding of that and that God wants to have a relationship with us, that we can get kept all of the things in our world that our messed up, jacked up.”

Along with Issac and Leonard, SA Spurs Coach Greg Popovich also decides to stand for the anthem and hasn’t yet provided a suitable explanation for his decision. Back in the NSWL, Rachel Hill and Samantha Murphy decided to stand as well.

Training camps to start soon amid pandemic, the world might see a new normal
Dwayne and Gracia to stand for XFL 2020, long due comeback to challenge NFL