Top 10 Most Controversial Football Matches of all time 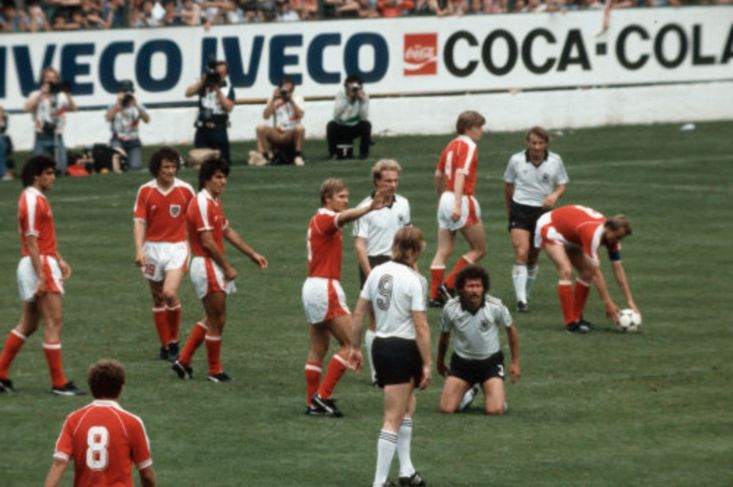 Although we often refrain, or better still avoid to comment when those things happen but the football world has been grossly involved in deep controversies many times. This can be excused as the game is played and judged by humans, and as we all know, humans are not perfect.

It might be that we presume that our favorite team was robbed of glaring refereeing calls, or our less favorite team were been granted an unwarranted favor over another team, or we feel that there is some kind of bias in some of the decisions that might lead to the annihilation or dismantling of our favorite teams, as said before, they were all humans – the players and the officials alike.

But there are times when we saw matches that were so doctored that it gives us migraines all through the preceding days after the match – like, did we see that? The most controversial football matches in football history that gives terrible attention are listed thus:

At the beginning of our list of the top 10 most controversial matches in football history stands this ridiculous game that will be remembered for long. It happened in the 2004 UEFA European Championship where Italy, Sweden, Denmark, and Bulgaria were drawn in the same group.

It already appeared as if Italywais heading for the exit door, only if they could beat Bulgaria – and they put in the required efforts to get that done but there was another factor to be considered before they would proceed to the knockout stages – Denmark and Sweden must not draw their math by at least two goals.

The match, known as “biscotto”.is what the Danish and Swede national team gave us – they made sure they tied the game at two goals apiece sending the Azzurri crashing out in very controversial circumstances.

For a long time before the end of the millennium, Arsenal’s matches against United were considered a very fierce, physical affair. This was hyphenated by the wars of words between the managers of both teams then, Arsene Wenger and Sir Alex Ferguson. But this particular match, referred to as the “Battle of Old Trafford Mark II” was a very physical, almost brawling affair.

Jose Antonio Reyes was the target of many robust tackles that got both Neville brothers, Gary and Phil, booked. But Arsenal soon started matching United’s tackles and Cristiano Ronaldo was at the receiving end of some rash challenges.

The outcome of the game was decided in the 73rd minutes of play when a spot-kick was awarded for a challenge on Wayne Rooney which was converted by Ruud Van Nistelrooy, and soon Rooney made sure that United walk away with all three points.

But the match turned on another course after the match itself had been put to bed. The players were heading back to their respective dressing rooms when the tunnels turned into a battlefield of food-fight, and Sir Alex Ferguson got his fair share of the fight by having his face smattered with a slice of pizza.

This was set in the final knockout match of a group stage match in the 1982 World Cup match when the two teams decided to rig the match and qualify. The best side in the group, Algeria had qualified but would have to wait on Germany to win their next and final match in the group stage against Austria by, at least, two goals. The whole fans expected Austria to be KOed, but the two teams had other plans.

In the few 10 minutes or so of the match, the only goal of the match was scored, and the fans expected more only for them to be treated to the worst form of football. They played the remaining eighty-plus minutes without any attempt at goal and misplaced passes.

The match was so bad that the German and Austrian commentators on the television urged viewers to change the channel and watch something else. The only good that came out of the match was that it influenced FIFA changing the timing of playing the last match of the group stage to concurrent times for the two matches in the group.

This match remains etched into football fans’ memory for a long time as the most unjustifiable win of all time. After the Frenchmen had won the first leg 1 – 0 on their home turf, they looked like they were going on to the 2010 World Cup tournament at the behest of the Irish team, but the Ireland players had decided they were not giving up without a fight, and that is what they did in the second leg on their home turf.

They ran rings around the Frenchmen. After an equalizer from Robbie Keane, it appeared the French team had run out of juice as they continued to struggle until the game got to the extra time. Even during the extra time, the Irishmen were the better team, until luck ran out on them. Thierry Henry stopped the ball from going out of the pitch with his HANDS, not once but twice, and passed the ball to William Gallas, who only had to nod the ball from close range to take the game home.

Unfortunately, the referee said the goal would stand and Ireland was knocked out of the tournament through a match they were the better team in. Eventually, they could take joy in the fact that going to the World did not do the Frenchmen any good, as they were knocked out in the group stage by losing to Mexico and South Africa

There are many accounts of controversial football matches witnessed within the past few decades but this, for many reasons, deserves to be named on this list. Not least because of the way it happened and the aftermath of it.

This event took place in a Euro 2016 qualifier match between Serbia and Albania. The events started when a flare was thrown onto the pitch which caused the referee to stop play before another was thrown that nearly hit a player.

The final straw that broke the camel’s back was when a flag was brought onto the pitch by a drone. The flag was caught by Stefan Mitrovic and two Albanian players try to confront him to retrieve the flag. That was when projectiles started flying in every direction, and the match was eventually called off.

Can you remember a match in which an awarded spot-kick changed the spirit of the game and produced serious controversies just recently? This was the semi-final of the 2015 Gold Cup between Mexico and Panama

Panama looked set for the final after they had taken the lead early in the second half. The match took a dramatic turn when the referee, Mark Geiger gave the Mexican a spot-kick that no one else saw, and captain, Andres Guardado converted.

As if that was not enough, the referee awarded another spot-kick to the Mexicans that took the breath out of the Panama teams attempt at a win. These two spot-kicks took Mexico to the final of that tournament, which they eventually won against Jamaica.

4. Portugal vs. the Netherlands

This one was quite more than a football match. It was a fight in disguise – a physical battle on the soccer pitch. Many will be able to recogniz the match that went on to be known as the “massacre of Nuremberg”, in which a record of 16 yellow cards and four red cards were given.

It all started when the Dutch team got Portugal in the round of 16 of the 2006 World Cup, and the fact that Portugal had previously defeated them in their last meeting in the semis of the 2004 Euros.

The Netherlands team was bent on getting the better end of the stick this time around, even if it meant getting their boots stuck in, and boy! did they get their boot stuck in! The match started getting ugly from the kick-off and the rest, they say, was history, even though Portugal managed to better them once more.

There is not much to say about this match except that it was knee-deep in controversy. It was the quarter-final of the 1966 World Cup, and two of the world’s cross-continental rivals were pitched against each other.

The referee of the match, Rudolf Kreitlein made headlines for sending the Argentine captain, Antonio Rattin off for not liking how the man was looking at him. Rattin refused to leave the pitch, and these decisions overshadowed the entire match.

The height of the controversy in the match was the England coach’s comment after the match, calling the Argentines ‘animals’ and stopping his players from swapping shirt with the Albiceleste players. It was really a provoking comment and it’s easy to see why the atmosphere was tense.

This was set in the 1934 FIFA World Cup quarter-finals. The tournament was rigged with a lot of scandalous, almost criminal calls that made it look like the referees were making the tournament easy for the hosts, Italy.

Spain looked set to take the spoils from the match after drawing first blood but the Italians quickly equalized amid protests from the Spanish team that their goalkeeper was fouled by the Italians, but the referee was having none of it.

In the end, Italy won the match after two goals were overturned and Italian, Guiseppe Meazza scored a controversial goal, which the referee decided to let stand. After the match, six players from the Spanish team could not play in the second game and the goalkeeper, Ricardo Zamora ended up with two broken ribs.

This was set in the semi-final of the 2008/09 UEFA Champions League, and Chelsea was having a very tough game against Barcelona. The game was tied at 1 – 1 and the Blues were doing all in their power to take the game home, only that referee, Tom Henning, had other ideas.

Dani Alves and Eric Abidal fouled Florent Malouda and Didier Drogba respectively, in the box, at different times, and Gerrard Pique and Samuel Eto’o handled the ball in the box, at another time, yet Henning decided not to call all these. The Catalan was sent to the final while Chelsea was sent home amid a lot of controversies.

Barca went on to conquer Europe in that tournament, albeit Tom Henning never came back to preside over a match in Europe. It stands at the top of our list of the most controversial matches in the history of the beautiful game.