10 Youngest players to ever win the Ballon d’Or

The Ballon d’Or is just around the corner and it is that time of the year when everyone is talking about the biggest individual honour that exists in football. Last year, Luka Modric broke the trend of Cristiano Ronaldo and Lionel but this year, his name is not even in the list of nominees for the award.

While Lionel Messi seems to be the favourite along with Sadio Mane and Virgil Van Dijk, this year’s Ballon d’Or seems like the most unpredictable one yet. However, this article is not about what is going to happen next.

Rather, this is about what has already happened – the days of yore when the rain still tasted sweet and the sunlight blossomed the flowers, or so we would like to think while reminiscing the past.

Team trophies are the most important thing in football. The Champions League, the World Cup, the continental accolades… every trophy that has a collective feel to it is the greatest in the scope of football as it epitomizes what the sport is all about: teamwork.

However, there are often times when players liked to be rewarded for their individual brilliance because, at the end of the day, we are individual beings that like to think of ourselves as a unique soul wandering around the green earth looking for a purpose in life.

For footballers, the Ballon d’Or is like a cherry on the cake – not as important but definitely good for presentation and also gives the extra flavor. And while having the cake is the first and foremost – the most important – objective, it is always nice to top it off with a cherry.

Some footballers are able to place the cherry at a very young age while some others take a longer time to achieve it. This list focuses on the former as here are the 10 youngest players to have ever won the Ballon d’Or…

Note: This list only considers a player’s age when he won his first Ballon d’Or title… 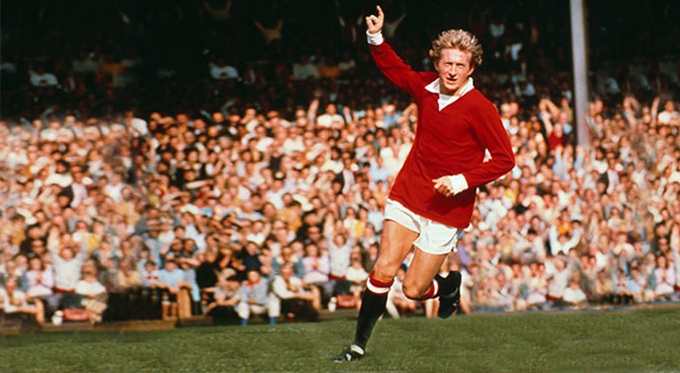 Denis Law is a proper Manchester legend. The former Scottish forward plied his trade for both United and City but it is with the Red Devils that he found the ultimate success.

One of the best forwards to have ever graced the game, he finished with 25 goals from just 50 matches for the Citizens in his first spell there. He then joined Torino and after a season in Italy, he came back to Manchester, only this time at the Old Trafford.

After that, he played some of the best football of his career as he was simply unstoppable. He was rewarded for his fine form in 1964 when he was awarded the Ballon d’Or following a season in which he scored 46 goals from just 42 games.

He managed to win the European Cup and also helped United to their first league campaign since the Munich air disaster. 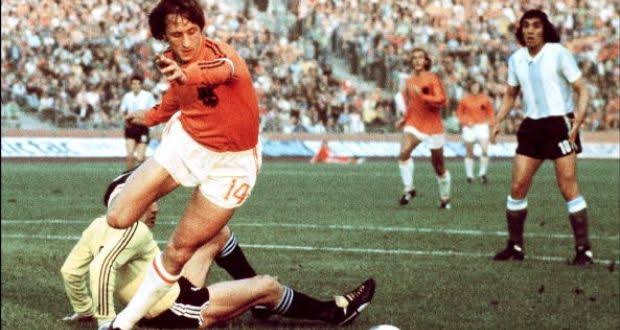 Johan Cruyff is widely regarded as one of the greatest players of all time and a pioneer of the sport in general. Not only was he a gamechanger on the field but he literally changed the game with his influence for both Ajax and Barcelona.

The former Dutch legend began his career at Ajax and led them to three European Cup titles in a row. He was the face of the Total Football that the Amsterdam outfit played and was unstoppable in those years.

Indeed, he won the Ballon d’Or in 1971 and then again in 1973 and 1974 – becoming the first player in the history of the sport to win the prestigious accolades three times. 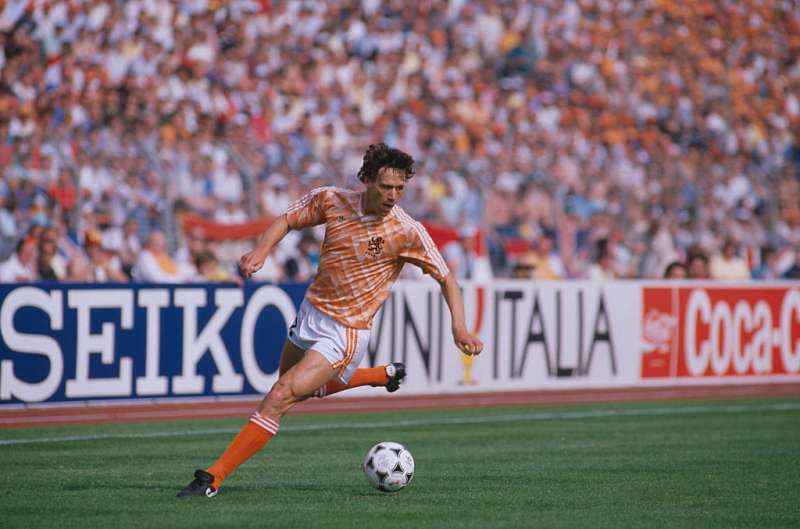 Another Dutchman to make it to this list, Marco van Basten is often regarded as one of the best players in the history of football. His name might have been higher in the football pantheon had it not been for his troublesome ankle.

Like Cruyff, van Basten has three Ballon d’Or titles to his name. His first came in 1988 while he was at Inter while his second and third came in 1989 and 1992. Like Cruyff, he began his career at Ajax and achieved legendary status at a very young age.

Indeed, he finished with 152 goals from 172 matches for the Dutch side before joining AC Milan – and he was only just 22 years of age at the time. After his time in the Netherlands, he joined Milan in Italy and made a name for himself with 125 goals from 201 games. 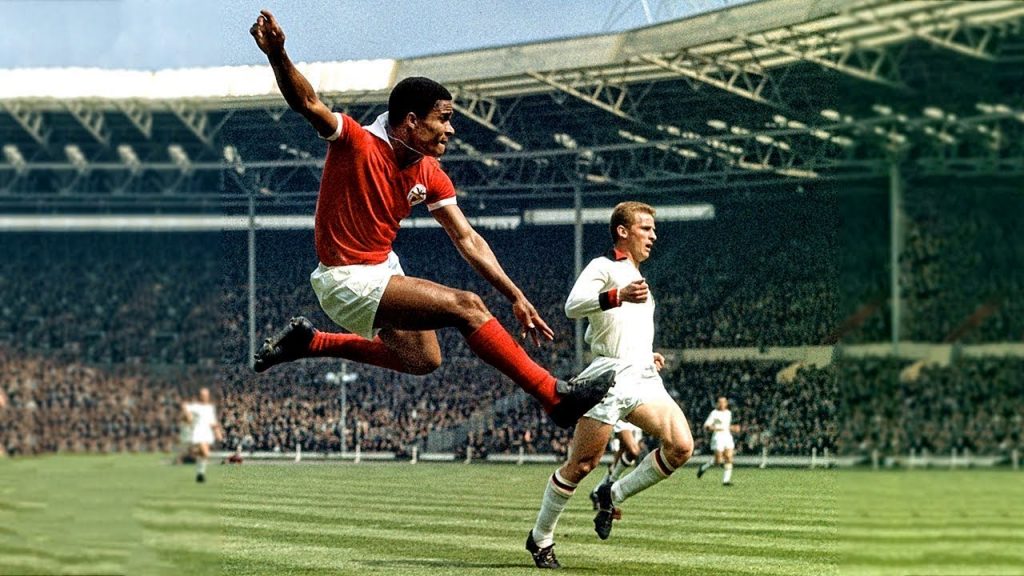 Eusebio is widely regarded as one of the greatest European players of all time. Spending almost the entirety of his professional career with Benfica, he managed to score 473 goals from just 440 matches.

It has to be mentioned that he scored those goals in an era where having a ratio of a goal in every two games was regarded as world-class. Hence, it could be claimed that the Portuguese was an anomaly – a brilliant at that one.

He won the European Cup in 1962 and scored 29 goals from just 31 games in all competition in that campaign. He was awarded the Ballon d’Or in 1965, just a few days before his 24th birthday.

Up next in the list is the player who has surpassed Eusebio as the greatest Portuguese player all time. Cristiano Ronaldo was always considered a super-talent but only a few expected him to achieve what he has in the world of football.

At a time when a certain Argentine was sweeping every award possible, Cristiano Ronaldo stood tall and determined and fought back with all his might to stand shoulder-to-shoulder with his rival.

The world saw a glimpse of what was to come when the Portuguese won his first Ballon d’Or award in 2008. After a superb season with Manchester United in 2007-08, where he won the Champions League and the Premier League, he was awarded the Ballon d’Or for being the best player in the world. 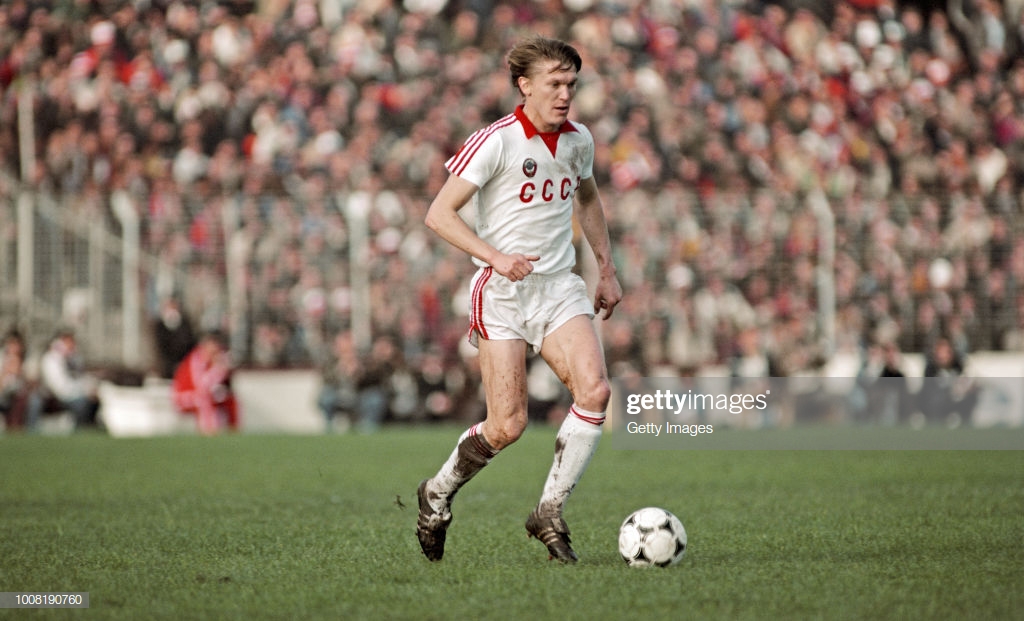 Perhaps the greatest forward of the Soviet era, Oleg Blokhin plied his trade for Dynamo Kyiv for the entirety of his prime years. Blokhin had a blazing turn of pace that left the defender trailing in his wake.

It is what allowed him to score so many goals as he finished with 266 goals from 582 matches for Kyiv. He won the Ballon d’Or in 1975 for his brilliance that year and he might have won many more had he moved to Real Madrid, a club that desperately wanted to acquire his services back in the day. 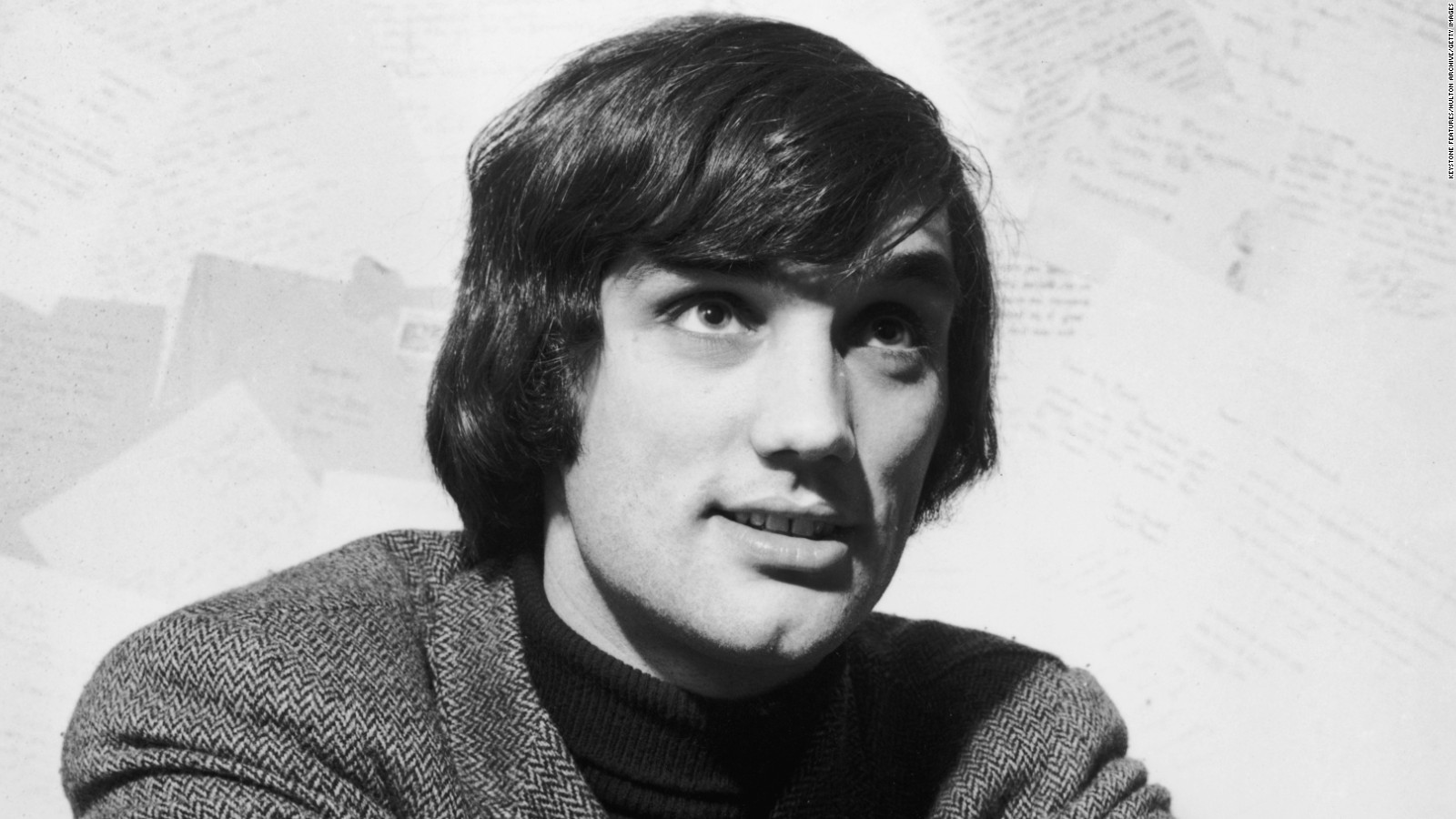 For Manchester United fans, he is their greatest ever talent. George Best was simply, as his name indicates, the best. He could outrun and out-dribble anyone under the sun and often single-handedly won his side matches.

Even with his problems with alcoholism, George Best was often the most difficult player to contain on the pitch. While there is no predicting as to how much better he could have been had he led a more disciplined life, what he did achieve with all his flaws was simply remarkable.

He helped Manchester United to the European Cup in 1968 and won the Ballon d’Or that very year as he had scored 32 goals from 53 matches in all competitions.

All of this at the age of just 22, which makes it all the more astounding. 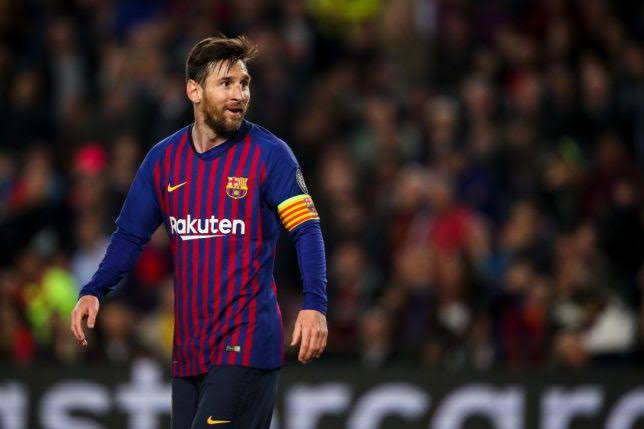 Maybe, George Best without his indiscipline might have been what Lionel Messi has gone on to be in the world of football. The Argentine wowed the world from his teenage days itself.

In 2009, he won the Ballon d’Or aged 22 years, 5 months and 7 days as he led Pep Guardiola to Barcelona’s maiden treble campaign. He scored 38 goals in that season in all competitions and kickstarted the era of Barcelona dominance.

A decade later, the Argentine is still active and going strong and might just win his 6th Ballon d’Or title this year as he is still leading the way for the Catalans at the age of 32. 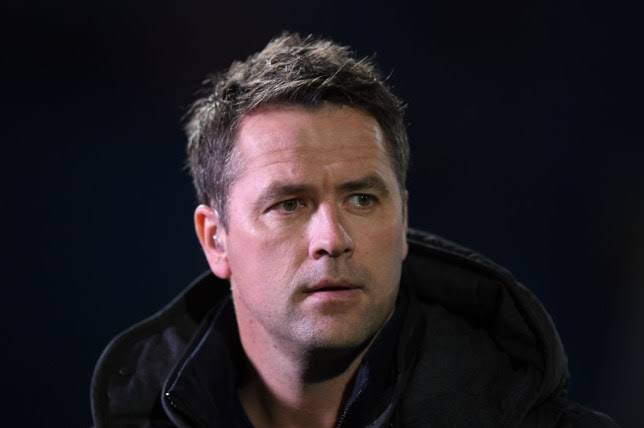 For many, Raul Gonzalez Blanco should have been the one to win the Ballon d’Or in 2001. Nevertheless, it was Michael Owen who was bestowed with the prestigious honour by France Football.

After winning the FA Cup and UEFA Cup with Liverpool, while also scoring 24 goals from 46 matches, Michael Owen won the Ballon d’Or just four days after his 22nd birthday.

Big things were expected from the Englishman and while he did enjoy a few more good years at Liverpool, things started going downhill from him after his move to Real Madrid, from which he never really recovered. 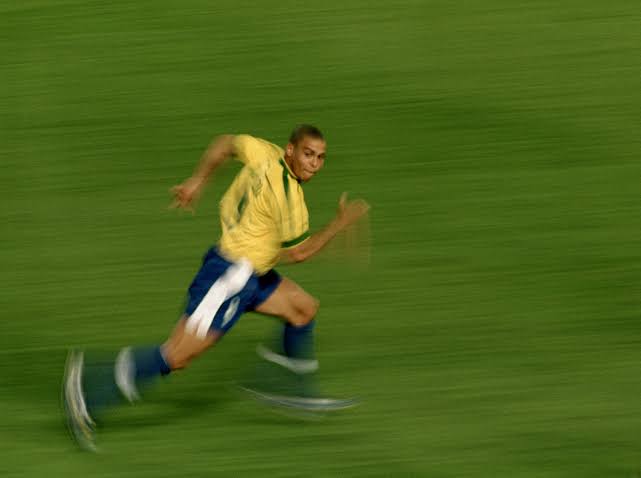 El Fenomeno, the great Ronaldo Nazario put the world of football on notice the moment he stepped foot on a football pitch. Those slick stepovers and silky touches always had a devastating finish at the end of it, making him the greatest striker in the world at the time.

In fact, if it weren’t for injuries, he might as well have ended up as the best of all time. After ripping apart defences in the Dutch league while playing for PSV, Barcelona spotted him and snapped him up.

He played at the Camp Nou for only a year but managed to make the fans dream with 47 goals from just 49 matches. He won the Copa Del Rey, Spanish Super Cup and the UEFA Cup Winners’ in his time at the Camp Nou and was awarded the Ballon d’Or his brilliance.

And he was only 21 years of age at the time. If only his career wasn’t marred with injuries, he might as well have gone on to become the greatest of all time.