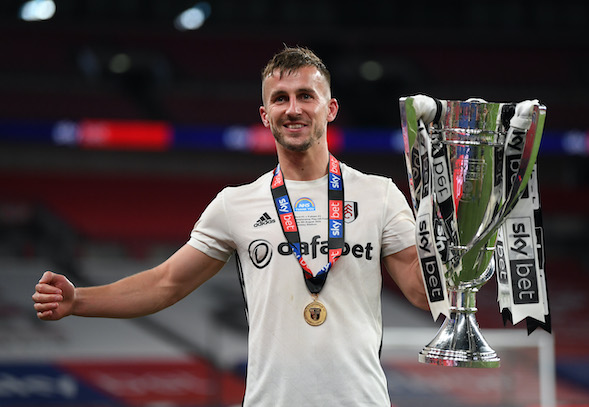 Fulham FC had a remarkable season after the club made a grand entry to EPL by winning the Championship Playoff. It was only possible because of Joe Bryan’s extra time brace in the Playoff Final against the favourite Brentford side.

Bryan’s stellar performance throughout the last season drew attention of EPL regulars. However, Championship winner Leeds United seemed ahead in the race to land the English left-back. Just when the rumors were getting strong, the Cottagers came up with a newer, more attractive contract to keep their last season hero in the club.

The news of Fulham’s desperate attempt to keep Bryan at Craven Cottage was initially covered by Football Insider this morning. Fulham coach Scott Parker is not willing to let Joe Bryan go albeit signing another left-back, Antonee Robinson from Wigan Athletic.

Sources tell the club wants competition for the position and Robinson is not a replacement of Bryan. So, after finishing contract extension with young winger Sylvester Jasper, Tony Khan’s team is now focusing on the same with their 2019-20 MVP.

Bryan’s present contract has 2 more years left. The 26-years old also wants to stay in the east London club to finish some unfinished business in the top-tier this season. Bryan was a part of the relegating Fulham side in EPL 18-19. So, it is quite obvious for him to revise the mistakes they made two seasons back.

Bryan was an instrumental part of Fulham, starting in 80 games for the club’s 2019-20 campaign. Bigger clubs took notice of his accomplishments. Clubs like Leicester City, West Brom, Newcastle United are also a part of the Joe Bryan saga along with Leeds. But, now with a better contract and Leeds signing Rodrigo Moreno with a record fee, it seems Fulham’s first choice LB is going nowhere.

Thiago Silva: I want to challenge for titles with Chelsea
Sadio Mane open to Barcelona move for reunion with former boss