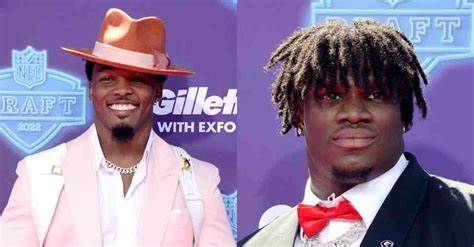 New Philadelphia Eagles Draft Pick Jordan Davis expressed his enthusiasm over getting into the same team with his college teammate Nakobe Dean.

The NFL Drafts were on show, and a lot of eyes were on each team’s draft picks. One team that seemed to have gotten their draft pick right is the Philadelphia Eagles. For their 13th pick, the Eagles drafted former Georgia All-American defensive tackle Jordan Davis.

At 6-foot-6, 340 pounds, Davis was one of the most intriguing players in this draft, and he rose up some draft boards after dominating the 2022 NFL combine with speed and athleticism.

Even with Fletcher Cox and Javon Hargrave entrenched as starters, Philadelphia drafted Davis to become an interior run stuffer with the strength to dominate one-on-one matchups and occupy double-teams at an elite rate.

Another good draft pick for the Eagles is Linebacker Nakobe Dean. A man who is considered the best in the class by many was instrumental in Georgia’s victory in the national championship.

Dean is also a former teammate of Davis, and Davis expressed his delight in being able to reunite with his former teammate. Lewis said, “Got my boy Nakobe Dean with me! Delayed not denied bro let’s show Philly how we do it!”

Got my boy @NakobeDean with me! Delayed not denied bro 💯 let’s show Philly how we do it 😁 #FlyEaglesFly #GoBirds

It will be interesting to see how the two former teammates combine. their shared experience on the field is sure to bring some added depth to the Philadelphia squad. While Dean’s availability may be up in the air for 2022, a healthy Nakobe Dean in 2023 will be a force. When you add to the fact that he and Jordan Davis will be teammates again, you can see why this pick makes even more sense.

The Eagles were ranked second in the eastern conference and lost to the Buccaneers in their wildcard game.