Soccer positions and their importance on the game 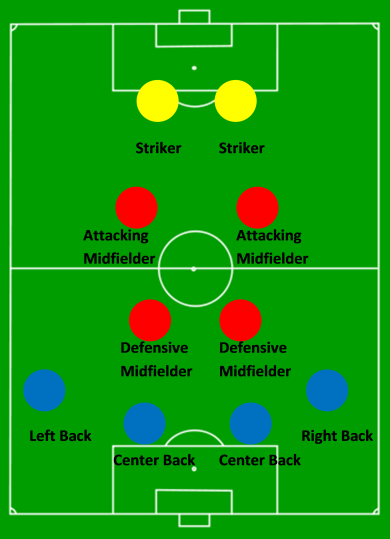 When it comes to watching a football game, the most important thing is to know the basic soccer positions in which football players play during the game. In every game there will be 4 fundamental positions which are subdivided in turn as the coach decides.

In every football match there will be, per team, 11 players divided into goalkeepers, defenders, midfielders and strikers. These are distributed within the field of play with an alignment previously designated to carry out the course of the match.

Each player plays a fundamental role in his soccer position, since each one must perform a specific task according to where it is located for win the match.

With the pass of the time the football positions were changing along with the alignments used by the coaches and, although today they are still using some popular alignments, the game schemes are constantly changing creating new positions.

Goalkeeper, the wall of the goal

The goalkeeper plays a fundamental role in football positions as he is the first player in charge of the rival team can’t deal goals.

The main characteristic of the player who play in this position is their height. In general, the goalkeeper must be a tall person with a great ability to stretch and move quickly in order to catch the opponents’ shots.

They must be constantly attentive to the attacks that the opponent may cause him to anticipate the auction and thus be prepared to respond efficiently to the opponent’s attack.

This position has suffered strong changes over time, since before the goalkeepers were characterized by being tall and advanced age players. Many of the most popular goalkeepers in ancient times debuted at an advanced age and young people were not considered capable of fulfilling this task.

Today, the world’s most popular goalkeepers debuted at young ages and are still young compared to the goalkeepers of the 70s and 80s.

Some of the most popular goalkeepers today are Keylor Navas, David De Gea, Gianluigi Buffon, Manuel Neuer, among others.

The unbreakable wall of the defense

The defense is also one of the most important football positions to keep the arc at 0 when they are facing the opponent. These players are in charge of which no rival forward has the possibility of finishing off the goal.

According to the coach’s decisions, the defense can be organized with a man-to-man marking, where the defender is constantly on the rival forward preventing him from advancing with the ball, and also with an area marking in which the defender waits in a determined position for the forward to intercept him.

This position is one of the most criticized in current football since the development of the defense is constantly being observed during the match and, in face of the slightest error, they are strongly criticized.

At present, many defenders have become important not only in defense but also in attack. The coaches decided to start using in modern football defenders in the stationary ball plays such as corners or free throws, taking advantage of the height they have to head the ball.

Because of this, the defense’s role became much more important and players began to be valued not only for how they defend but also for how they perform in the attack.

In turn, the defense is divided into several positions as the coach sees it necessary. The most relevant are the following:

This position is highly controlled by the coach as they must ensure that they do not make mistakes to prevent the opposing team from scoring goals.

Their role in the attack is fundamental in some teams, since they must send the ball to the midfield and generate chances for the strikers in some formations used in modern football.

These are the two most common types of defenses that are seen in current football, but there are also other positions that some coaches use adapting the alignment to the chosen tactic.

Some of the most popular defenders today are Thiago Silva, Sergio Ramos, Gerard Pique, Daniel Alves, Marcelo, Jordi Alba, among others.

The game constructor, the midfield

The midfielder is in charge of generating the game and making sure that the ball reaches the front. Normally they fulfill an essential function in the team since they must be constantly driving the ball both in defense and in attack.

According to the task assigned to each midfielder, he must work both in defense and in attack. They must prevent the opposing team from advancing in defense and get the ball to the strikers in attack.

In modern football, they are the main lane through which the ball will pass, and they must constantly be aware of the play in order to accomplish their task efficiently.

Over time this position always maintained a fundamental role within the team, as great players became popular thanks to their work as midfielders.

Each midfielder has a task assigned by the coach according to the position in which he works, the most usual positions are:

His importance in the team is due to the fact that if he is not playing a good game, his team will not generate scoring chances and they will be in a complicated situation.

Some important midfielders who play in the big leagues are Modric, Pogba, Sergio Busquets, Ivan Rakitic, Marco Reus, among others.

The forward has the most important function of the team, make goals to win the match. These players are the ones who define the matches with their defining ability in the goal.

They are the players that most attract the attention of the public due to their important work to define the score of the match.

The coach must constantly be aware that the ball reaches its strikers correctly and that they know how to define efficiently in the rival goal as they are the ones who must put the team up on the scoreboard.

Over time in this position is where more changes have occurred. With the schema changes that became trends, many new positions appeared to add skill to the front.

Before, it was typical to see 2 front center teams as the only members of the forwards and now the tendency is to see 1 center forward along with two extremes. These changes were due to the great need to change the style of play to win games.

For this, the coach will use his strikers in the position that most needs them, some of the most popular are:

Some of the most important strikers of today are Lionel Messi, Luis Suarez, Cristiano Ronaldo, Zlatan Ibrahimović, Sergio Agüero, Kylian Mbappe, among others.

All this positions are essential in the team when they are playing the game because they complement each other to achieve the goal and win the game.

The coach will decide which soccer positions use according to the tactics and strategy for the proper functioning of the team. Every seasons form new trends in teams that lead them to use similar alignments and in this way certain positions become popular.