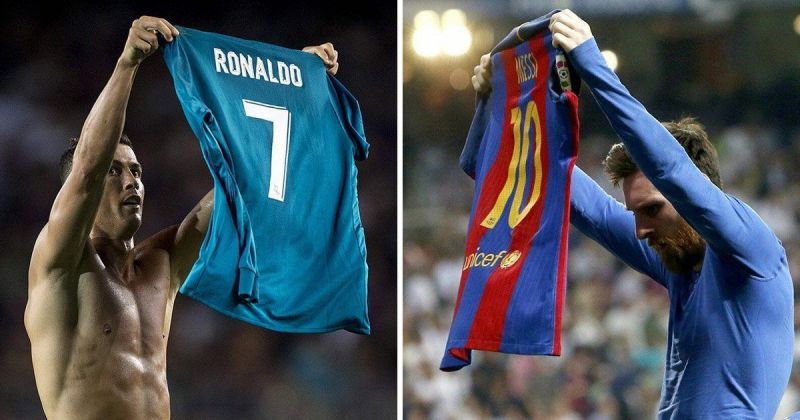 Political issues in Spain might have marred the attention and forced the highly-anticipated first El-Clasico match of this season to be postponed from its original date, but it takes nothing away from the relevance and prestige of this great fixture.

By some distance, the El Clasico remains the most coveted encounter in the world of football. When Spain’s top two teams clash in a bitter rivalry game, it’s always going to be war. The el clasico is all about prestige; two clubs with the finest players on the universe locking horns to secure the bragging rights at the expense of each other.

It is also a platform for great footballers to prove their class to the world. Over the years, many legendary superstars have entertained us with their amazing talents in this beautiful fixture and have written their names in the book of history as a result. From unbeatable defenders to the finest midfielders and down to the most prolific attackers, we present to you the top 10 players in the history of the El Clasico:

Currently playing for Japanese side, Vissel Kobe, there is no doubt Barcelona legend Andres Iniesta deserves a place on this list – courtesy of his eye-catching performances for the Blaugrana whenever they faced their arch-rivals Real Madrid during his Camp Nou days.

Iniesta was more than just a midfielder, his ability to catch the attention of the fans and put up a fantastic show in the most coveted football fixture on the planet with his silky touches and incredible turns is without question.

Iniesta is also one of the very few superstars to receive a standing ovation during an El Clasico encounter. He was applauded by even Real Madrid fans after he fired in a beautiful effort from the edge of the box from a Neymar assist in the first leg in 2016.​

Not many would have forgotten the impacts that former Barcelona midfielder, Xavi Hernandez had in El Clasico during his playing career, especially in the past decade. A midfielder of the highest order, Xavi treated us to amazingly beautiful football in this intense fixture for years.

His unique ball control, incredible press resistance, intelligent movement, and unbelievable play dictation were a joy to watch. One of the greatest passers of all-time, Xavi could split opposition apart defenses in the blink of an eye with his amazing through balls into the box.

Alongside Iniesta, he terrorized Real Madrid in the center of the pitch for long and will always be remembered for his eye-catching display during the second leg of the 2013/2014 El Clasico in La Liga. Xavi has retired from the game but his spot on the list is well-assured.

The Hungarian football legend is widely regarded as one of the best players in the history of the game. He also ranks high among the finest attackers the universe has witnessed, recording an unbelievable 622 goals to his name in 629 matches throughout his career. He also lit up the El Clasico, with 14 of those goals coming in Spain’s elite fixture.

Ferenc Puskas enjoyed a highly successful stint at Real Madrid. The attacker wrote his name in the record books at the Santiago Bernabeu after moving to Spain from Budapest Honved, breaking the 40-goal mark in three consecutive years; between 1959/60 and 1961/62 campaigns.

Puskas was known for his powerful shot and was named by World Soccer Magazine as the seventh-greatest player of the 20th century. He will also be remembered for scoring some of the most beautiful goals the sport has witnessed. The famous Puskas Award, which honors the finest goals in football every year was named after him.

The El Clasico has witnessed a lot of fantastic talents over the years have who proved their incredible class with unbelievable performances on the pitch. However, when it comes to a player who combined skills, flair, and trickery to deliver unmatchable entertainment to football fans in the fixture, no one did it like Ronaldinho.

Ronaldinho scored in four consecutive El Clasico matches between the 2004/05 and 2005/06 campaign. He is also one of the very few Barca players to receive a standing ovation from Los Blancos fans during this intense rivalry game. He will be remembered for helping Los Blaugrana to put an end to Real’s domestic stranglehold and setting the pace for the club’s successes in recent years.

For a player who has been sent off a whopping five times against Barcelona in his career, Spain captain, Sergio Ramos also finds himself on this list and deservedly so – thanks to his warrior attitude whenever the bell rings for the greatest football fixture in history to be played.

Ramos has become the face of the Spanish giants. Whenever he isn’t included in the squad to face Barca these days, we can easily predict that their Catalan counterparts would make an easy run of them. Such is his relevance to the current Real Madrid team.

The Spaniard isn’t an attacker, yet he has notched up a couple of important goals for the Merengues in this intense fixture. His efforts at the other side of the pitch is priceless. He is well-known for putting up serious battle against even the finest attackers – which is what the El Clasico is well-known for.

Raul Gonzalez is a well-known figure to football fans who had the opportunity to watch the El Clasico in the past two decades. The Spaniard undoubtedly ranks among the greatest Real Madrid players of all time – with regards to his exploits with the Merengues as well as his individual achievements.

Only Alfredo Di Stefano and Cristiano Ronaldo have more El Clasico goals to their names than the Spanish forward. Raul scored an impressive 15 goals for Los Blancos against Barcelona during his time at the Santiago Bernabeu.

The striker spent the most part of his career in the Spanish capital. He became a popular figure among the Los Blancos faithful and also enjoyed a decent international career with the Spanish national team. With a lot trophies in his record, Raul was granted a heroic farewell when he decided to quit the Bernabeu. He spent the latter phase of his career representing German club, Schalke 04 before eventually hanging his boots.

Johan Cruyff is one of the most notable names in the game – courtesy of his amazing impacts both as a player and as a manager. He earns constant mentions whenever the debate for the all-time greats gets off and he will be remembered as one of the players who impressed the most in the El Clasico.

Cruyff had an instant impact on the fixture. Immediately he arrived at Camp Nou from Ajax, he proved his class with a superb display to grant Barca a vital victory in his El Clasico debut. He followed it up with several mesmerizing displays in his subsequent appearances.

The Dutchman helped the Catalans to enjoy superiority over their arch-rivals during his time in Catalonia. He will be remembered as one of the very few players to be applauded in the historic football fixture. Unfortunately, he passed on just a few years ago but his legacy lives on.

This is one of the few players that every football fan expects to find on this list. Ronaldo might have just left Real Madrid for Juventus but his exploits for Los Blancos in the world’s most coveted football fixture are still fresh in memory.

The Portuguese was a huge influence in the El Clasico during his days at the Santiago Bernabeu. His jubilation, when he removed his shirt to replicate Lione Messi’s act in the Supercopa de Espana in 2017 ranks among the biggest highlights in the fixture in the past few years.

Ronaldo also has a claim to being one of the most prolific attackers in El Clasico history. He is currently tied with Alfredo Di Stefano at 18 goals. He won a lot of trophies in his time at the Bernabeu, including three consecutive UEFA Champions League trophies.

One name that keeps attracting respect from Real Madrid fans whenever it is mentioned, Argentine legend, Alfredo Di Stefano cannot be left out when we discuss the biggest legends who caught the eyes of football fans with their amazing talents in the world’s most prestigious football fixture.

Di Stefano’s move to Real Madrid at the expense of Barcelona continues to hurt the Catalan giants. Especially because of the level of success he brought to Santiago Bernabeu as well as the unbelievable performances he put against the club during the El Clasico clashes.

The Argentine’s spot on this list is without question. He was the all-time scorer of the fixture for several years before Lionel Messi stepped up to take the first place from him in the scorers’ ranking. Di Stefano scored a whopping 18 El Clasico goals for Real Madrid during his time in the Spanish capital.

There’s absolutely no doubt regarding who the greatest player in the history of the El Clasico is. Lionel Messi isn’t just a Clasico great, he is also one of the most iconic footballers to put on a pair of boots and entertain us on the pitch.

Barcelona are currently enjoying an era of dominance over their bitter rivals and they have the Argentine maestro to thank for his incredible impacts on the game. Messi is a man for the big occasions and he always seizes the prestigious fixture to prove to the football world just how great his talent is.

The playmaker has cemented his place as the most prolific player in the history of this intense fixture, having already recorded a whopping 26 goals to his name and he will surely score more in the next few years to pull further from his rivals. He is surely in a league of his own as far as this list is concerned.