Jake Paul vs Hasim Rahman Jr. is scheduled to take place on 6th August, at Madison Square Garden. Rahman Jr. comes in as a late replacement for Tommy Fury, he is unable to travel to the US because of his visa-related issues.

Jake Paul vs Tommy Fury was a highly anticipated fight that has not gone down despite being scheduled twice. With fighters being so close to the scheduled date of 6th August, the showstopping fight had to happen in order to save everyone from incurring massive losses. With Fury pulling out in the eleventh hour, it was necessary for someone to fill in those boots. Enter- Hasim Rahman Jr.- the son of former boxer Hasim Rahman. The 31-year-old is a seasoned professional and boasts a 12-1 record, with his last fight ending in defeat.

People related to the fighting industry have been asked all over about their thoughts on the fight, and UFC President Dana White was not exempt from that list. Dana and Jake have had a lot of back and forth on social media, and he is regularly asked about the controversial boxer. 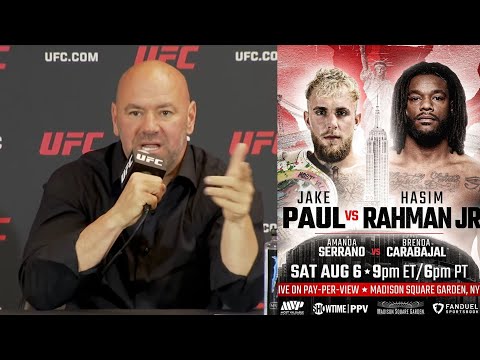 During the press conference after UF Fight Night: Ortega vs Rodriguez, White was also asked to comment on Jake Paul vs Hasim Rahman Jr. The UFC honcho noted that Rahman Jr. recently suffered a TKO loss to Kenzie Morrison, son of Rocky’s boxing star Tommy Morrison, at the Sons of Legends card in April. White questioned why Paul chose not to challenge the fighter who took down Rahman Jr. While the reporter answered Dana by saying that it was “the easier fight”, Dana was quick to respond by saying that he is not a part of that type of business.