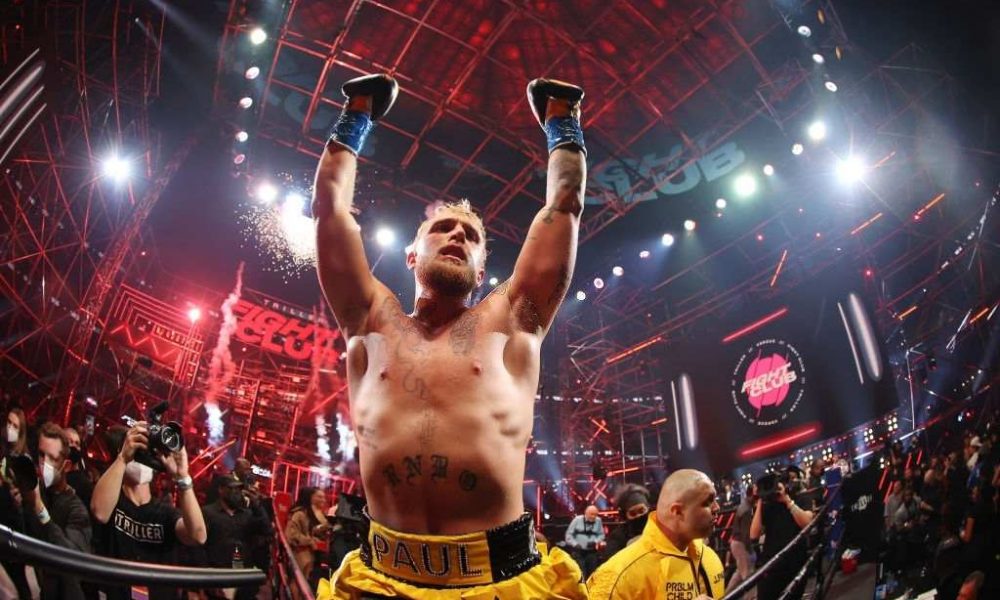 Jake Paul is an American YouTuber, internet personality, social media influencer, rapper, and boxer. Initially, Jake and his elder brother, Logan rose to fame on the platform, Vine. Thereafter, Jake appeared on a Disney Channel show Bizaardvark, where he played the character of Dirk Mann. However, things did not go as planned with Disney, and hence, Jake began investing time towards his YouTube channel.

Soon after, we saw Jake’s transition to a full-time YouTuber and soon musician, along with his crew, Team 10. In 2017, Paul and Team 10 released the song, “It’s Everyday Bro”.  The song amassed 70 million views in one month and was also the most disliked video on YouTube at the time. After defeating AnEsonGib in a first-round knockout during their fight at Meridian at Island Gardens on January 30, 2020, Jake Paul celebrates in Miami, Florida. (Credits: Getty Images)

Currently, Jake is working on his boxing career which originated from a feud with UK YouTube sensation, KSI’s younger brother, Deji. Although the fight with Deji was an amateur bout, Paul has since then shifted towards professional boxing and holds a record of 3 wins and no losses. Jake has victories over UK YouTuber An Eson Gib, Basketball player, Nate Robinson, and former UFC fighter, Ben Askren. Additionally, Jake is currently in training for his upcoming hyped boxing fight with former UFC welterweight champ, Tyron Woodley. Jake Paul looks on after defeating AnEsonGib in a first-round knockout during their fight at Meridian at Island Gardens on January 30, 2020, in Miami, Florida. (Credits: Getty Images)

In 2021, Jake Paul’s Net Worth stands at an estimated $20 million. Originally thought to be less than $20 million, his Net Worth has seen a sharp rise following the PPV success of his fight with Ben Askren. According to Triller Fight Club, the fight between Jake and Ben Askren generated an estimated 1.5 million buys, generating $75 million in the process.

Additionally, Jake owes a share of his Net Worth to his sponsors and endorsements. Moreover, Jake has a consistent income stream in his YouTube channel, which is ever-growing and fetches him a very good amount of money.

Here is a detailed look at the sources of income that fetch “The Problem Child” his current net worth of financial wellness. Jake Paul and Ben Askren face off in their cruiserweight bout during Triller Fight Club at Mercedes-Benz Stadium on April 17, 2021, in Atlanta, Georgia. (Credits: Getty Images)

Previously, Jake Paul has taken on YouTubers Deji and AnEsonGib and NBA Star Nate Robinson. Subsequently, for each of these fights, Jake’s payouts have ranged between $1 to $10 million. In comparison, for his fight with Ben Askren, Paul brought home a guaranteed $690,000 which is expected to cross the $1 Million mark after PPV revenue.

As a result of such consistently high payouts, Jake is not only one of the richest and highest-paid YouTubers, but also one of the highest-paid combat sports athletes in the world.

Currently, Jake’s YouTube channel has a massive 20.4 million-strong audience. In addition to that, Jake also rakes in a lot of money for his views which average between 2-4 million per video. Following his move from Disney and VINE, Jake’s YouTube channel has been his main platform for quite some time. Here, he posts videos about his daily life, his family, friends, fight camps, his music, and much more.

As of 2021, Jake Paul is reportedly the second-highest YouTuber in terms of earnings and Net Worth. In a day, Jake’s channel can get an average of 12 million views. Subsequently, this generates an estimated revenue of around $20,000 per day ($7.3 million a year) from advertisements that run on the videos.

Apart from Jake’s Boxing career and YouTube channel, he owes a chunk of his Net Worth to his sponsors and endorsement deals. Some of Jake’s sponsorship deals include boohooMan, Anti Fund Investment Fund, DraftKings, RNBO Clothing, SPRAYGROUND. As a result, Jake brings in upwards of $ 1 Million per year from these deals which further add to his ever-increasing Net Worth.

How Jake Paul Spends His Millions?

By now, it’s quite evident that Jake likes to live his life loud and in style. Naturally, the social media and boxing star likes to party and buy expensive things. As such, let’s take a detailed look at how “The Problem Child” spends his high budget income.

Social media star Jake Paul used to own a mansion in Calabasas, CA. The mansion is 15,000 square feet over 3.5 acres and costs $6.9 million. Previously, the mansion would house Jake Paul and his Team 10 associates who are his gang of internet personalities that all hangout and make content together. It is also where Jake used to host parties and make a lot of his videos.

Recently, Jake has announced that he will be selling the house and moving out of California to focus more on his boxing career. According to Paul, living in California comes with its distractions and would deter him from his journey to become the No.1 Prizefighter in the world.

Evidently, Jake is not shy about his wealth and is known to show off his lavish lifestyle online, often sharing posts of private jets and designer shoes and clothes and cars. Moreover, the Ohio native is also often seen posing with a variety of expensive cars, including Rolls Royce, Lamborghinis, Aston Martins, Ferraris, and a custom Tesla that alone is said to have cost £81k. Whilst some sources say Jake owns four cars, the social media influencer himself claims to own 10 vehicles of his own.

Although many only see him as spoilt, notorious, and unabiding, Jake also has a charitable side to him. As such, Jake and his brother Logan are associated with the Make-A-Wish Foundation, which grants terminally ill children a wish. Additionally, Jake also helped in the relocation of around 50 people during Hurricane Harvey in 2017 wherein he helped rescue people from their flooded homes. Moreover, Jake also raised awareness on the issue and rallied support and funds for those affected by the disaster.

YouTube sensation Jake Paul started his boxing career not too long ago. So far, he has played three boxing fights and won three of them. Though Paul played all those fighters in their debut matches, all those wins are achievements that will be listed in his boxing record.