10 most hyped boxing matches of all time 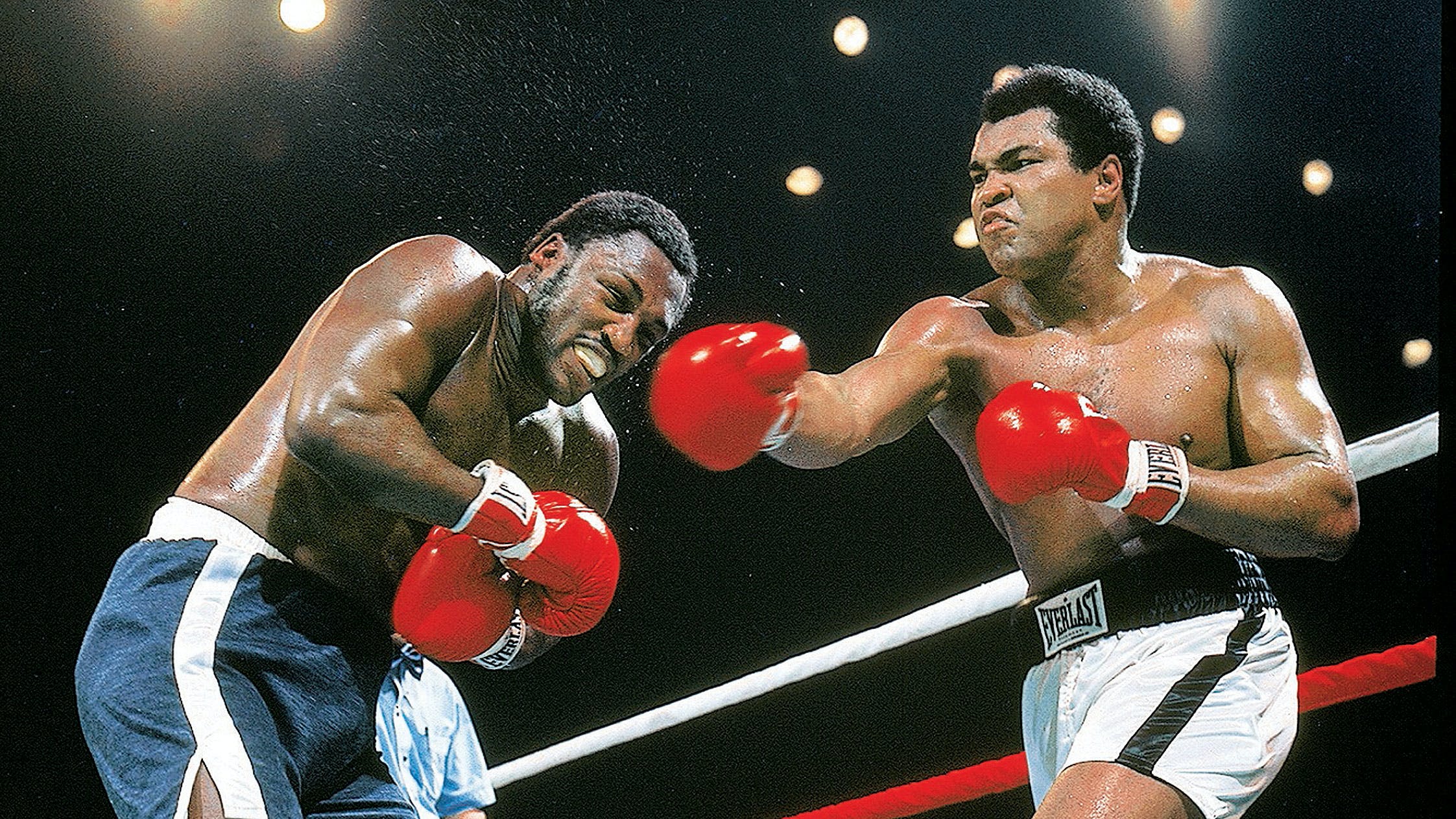 By demonstrating some of the most legendary and entertaining matches, the boxers have made boxing a great sport of combat. Over the century, the world has witnessed many thrilling matches, among which the matches between Muhammad Ali and Joe Frazier or between George Foreman and Michael Moorer could be considered as the most hyped matches of all time.

The excitement, suspense, groundbreaking thrill, and unexpected series of events made the matches extraordinarily pumped. The crowd went insane sitting in front of the TV set and forgot to breathe as the matches turned intense.

We have enlisted such remarkable and most hyped boxing matches of all time in our top ten list. Let’s have a look at why these matches were hailed for decades after decades.

Watching a 45-year-old boxer in one of the most hyped matches is not something that is witnessed everyday. In 1994, such an incident took place when the most exciting match between George Foreman and Michael Moorer took place.

When Foreman was at his 45, his opponent Moorer was only 27. Such an extraordinary match must be ranked on the list of greatest matches ever, otherwise, it would be an injustice to them. The match was in control of Michael Moorer from the very beginning. Clearly Foreman was lagging behind in speed and implementing tactics throughout the match.

During the match it felt like Foreman was trying to put back Moorer on sleep; lulling him. But he was slowly developing his strategy to find the perfect time to knock Moorer out. After a while when Foreman hit him with a massive right-hand blow, Moorer fell.

The match was owned by Foreman by setting a milestone of earning the title as the oldest man in history. Every spectator of the event was left speechless.

If a match is considered to be the most upsetting fight ever then surely the match between Buster Douglas and Mike Tyson in 1990 would be one.

At first, Tyson was quite comfortably dominating in the first few rounds. But the scenario started to change from the next round when Douglas focused on his jabs and rights. Having everything planned, he started to hit so hard that the left eye of Tyson began to swell badly. The crowd did not expect this match to be such a brutal match with countless uncertainties.

The eighth round offered more surprises. A sudden uppercut of mighty Tyson literally floored Douglas and the match could have ended there if not for the referee who started to count a second later. But the scenario changed when that did not happen.

In the 10th round, Douglas was knocked out by Tyson. No, it wasn’t over yet. Coming back even stronger with heavy power, Douglas hit Tyson harder that it seemed Tyson’s head was going to leave his body! The mighty Tyson was dazed and was looking for his mouthpiece on the mat.

The match ended with Douglas named the victorious.

The great fight between Rocky Marciano and Ezzard Charles in 1954 will always be considered as one of the most hyped boxing matches of all time in terms of the intensity of the match.

Both of the boxing legends had to offer something exciting as they were praised and applauded for their greatness.

In the first few rounds of the match, the defensive skills and techniques of Charles created a real problem for Marciano as the brawl was much preferred by Marciano. In the sixth round, Charles was almost defeated by Marciano. But he got lucky and managed to continue.

After the round ended, Marciano had to agree that it is one of the toughest bouts in his career. However, he was willing for a rematch with Charles the same year. Being unfortunate in the second bout, Charles was defeated by Marciano ending the super exciting match.

If you have a weak heart then the match between Ike Ibeabuchi and David Tua is probably not for you. Brutality in boxing reached the maximum level in this match; which is thought to be one of the greatest hyped matches of all time and still remembered by the boxing fanatics.

People never imagined this match to be such devastating or breathtaking. The unexpected showdown put this match in the list of biggest boxing fights ever.

The two legendary boxers exchanged more than 1700 punches in a total of 12 rounds of the match. You can only guess by the numbers how brutal and intense this match was! Even much fewer punches were exchanged in the ‘Thrilla in Manila’ with two extra rounds.

Even in the final round when they were leaning on each other and had no stamina left, they continued to throw punches as much as possible. It was a close fight. But Tua could not survive till the end. Hands that were raised in victory were Ibeabuchi’s.

The iconic match played between Michael Moorer and Bert Cooper surely is one of the biggest boxing matches ever; possibly the most exciting one as well.

The match was intense and full of suspense. It did not even take five rounds for this match to be one of the biggest boxing fights. Coming back stronger in the first round, Cooper dropped Moorer without any hustle. It was obvious that the fight is definitely not going to the 12th round or even nearer!

It was obvious that Moorer needed a different strategy to defend Cooper. Both of them fought really well and exchanged punches. They fought in an unceasingly intense way. But Cooper did not stop being aggressive. At one point, it was his downfall as he was really tired at that time.

The advantage was taken by knocking out Cooper while he was in between the bottom ropes of the ring. With a left hook and a massive right uppercut, Moorer finished him off!

There was a lot of bleeding and a lot of hardcore punches delivered by each other. Klitschko had a nasty cut just above his left eye but despite such a cut he was dominating and had it all planned. It seemed that the match would surely be won by Klitschko.

But the bleeding did not stop, it could not be stopped. That is why after the sixth round the fight was called. It seemed a rematch is inevitable as Klitschko was really inflamed. But as Lewis retired in 2004, the rematch never happened; which disappointed many boxing fans.

The fight between Braddock and Baer was not less cinematic in any aspect. It was also one of the most hyped boxing matches anyone has ever witnessed. A series of unexpected events took place in this outstanding match.

Being unstoppable, Baer fought recklessly. The strategy he adopted was to focus on tiring Braddock as much as possible. And then he started to throw countless crisp jabs as well as his powerful body shots.

Things were taken seriously by Baer while Braddock slowly started to dominate and unleash his power. The insane cheer of the crowd at the Madison Square Garden was a driving factor for Braddock to turn things upside down.

Being aggressive, he started to bounce back at Baer. But luck did not favor him when he needed it the most. Finally, he gave up. The match was won by Braddock in a unanimous decision.

The most hyped and one of the best boxing matches was played in 1961 between Floyd Patterson and Ingemar Johansson. So, who was able to stand till the end? Let’s find.

The first two fights of the match between Johansson and Patterson was a tale of two different stories. Undoubtedly, Johansson was dominating in the first round where he knocked down Patterson seven times.

Yes, you heard that right. It was easy for Johansson because Patterson was clearly underestimating Johansson. So he took the chance and made the best use out of it.

But the second fight was different when Patterson came back even stronger and plotted a different strategy to finish off Johansson. In the fifth round, he viciously knocked out Johansson. It was considered one of the most brutal knockouts in history until that time.

The third fight was full of suspense and lots of uncertainties. Both of them were fighting vigorously and went down in the first round. Exhausted Johansson tried to redeem all his energy. But Patterson was not easy to be defeated. In the sixth round, he knocked Johansson senseless.

It was one of the most captivating 10 counts the boxing industry has ever seen. It was impossible for Johansson to get up. The match ended when the judges announced Patterson the winner.

The match between Joe Louis and Billy Conn is undoubtedly one of the most hyped and biggest boxing matches ever. It took place in the year of 1941.

In the first two rounds of the match, Louis was dominating and played much better than Conn. But the third round was offering something unexpected. People witnessed Conn getting back to Louis and tried to exhaust him in all possible ways. In the 13th round, it seemed Louis was about to lose.

But Louis did not give up that easily. While maintaining his stamina, he was also planning his strategies in the meantime. Suddenly, he delivered a hard right and after that, threw countless punches which were both precise and powerful.

It was impossible for Conn to survive. His heart might be in but his body gave in ending one of the super hyped boxing super fights leaving people speechless.

The fight between Muhammad Ali and Joe Frazier in 1971 is considered the ‘Fight of the Century’. During the Vietnam War, Muhammad Ali did not agree to be drafted in the military. And that is why his heavyweight title was taken away in 1967. Frazier did everything he could to beat everyone to get a hold of that title.

The Supreme Court had yet to decide whether he should be in jail or not. However, a boxing license in Atlanta and New York was granted for Ali.

After he defeated Oscar Bonavena and Jerry Quarry, Muhammad Ali agreed to sign for the match where he would fight the mighty Joe Frazier in the Madison Square Garden.

The two undefeated boxers met in the ring for the very first time. The luck was not good for Ali. In a unanimous decision of a total of 15 rounds, Frazier won the match. But both of them were proven legends and this was one of the biggest fights in boxing history.

The ranking could never define how hyped a match was compared to another one. The ranking is relative like it has always been. Some of the most hyped boxing matches of all time could only be applauded for its greatness and immense suspense; not for the ranking.

In this ranking of the top 10 most hyped boxing matches of all time, we tried to focus on the popularity and level of intensity, and pressure that is involved. Demeaning the gravity of any match by putting it in further position was never our intention.

Alexander Povetkin stuns the world with his one punch KO of Dilian Whyte
Rocky Marciano: the pioneer of boxing world