Liverpool vs Arsenal: what we learned from the thrilling game at Anfield 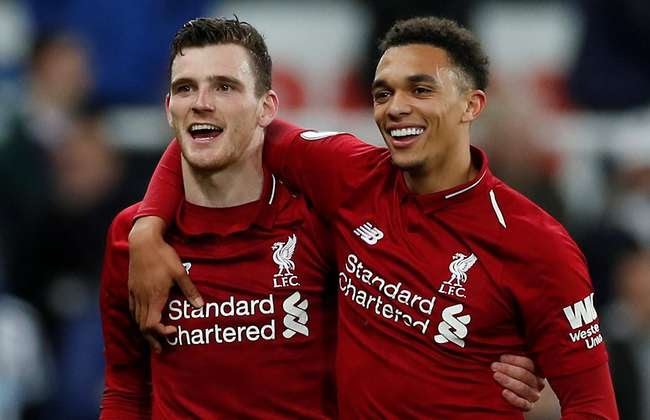 Liverpool vs Arsenal was the game everybody looked forward to on matchday 3 of the Premier League and the game did not disappoint, as it was full of drama, goals and intrigue.

Both sides came into the fixture with a 100% record, having each won their opening two games and Arsenal went into the lead when Alexandre Lacazette prodded home a miskicked clearance by Andrew Robertson in the 25th minute.

The goal was against the run of play, as up to that point Liverpool had been totally dominant and they got their deserved equalizer just three minutes later when Sadio Mane finished at close range after Mo Salah‘s shot had been parried into his path.

The hosts went ahead in the 34th minute, with Robertson making amends for his earlier error to give Jurgen Klopp’s side a 2-1 lead at the break.

It was more of the same in the second half but for all their efforts, Liverpool struggled to put the game to bed and Arsenal threatened to grab an ill-deserved equalizer but were let down by poor finishing by Lacazette but Diogo Jota stepped off the bench to give the Reds a 3-1 lead and put the game to bed.

The victory saw Liverpool join Leicester City and their Merseyside rivals Everton as the only sides with a 100% record and they will have just two days of rest before taking on Arsenal once again in the Third Round of the League Cup.

Here, we shall be discussing major talking points from the Liverpool vs Arsenal fixture.

Anfield remains a fortress even without fans

Liverpool came into this clash with a 60-game unbeaten run at home in the league and even without fans present, the champions kept their record going with a comprehensive and dominant display.

The last time Liverpool lost at Anfield was on April 23, 2017 when Wilfred Zaha inspired Crystal Palace to a 2-1 victory and since then , they have won 51 Premier League games at home and drawn 11.

For context, since Liverpool lost at home, City have lost five matches in the same time, Manchester United have lost nine, Tottenham have lost 11, Chelsea have lost nine; Neymar, Messi, and Suarez were still together at Barcelona and VAR had not been introduced.

They are still some way off the league record of 86 set by Chelsea between 2004 and 86 (which was ironically ended by Liverpool) but in this form, it would not be beyond the Premier League champions to go all the way. 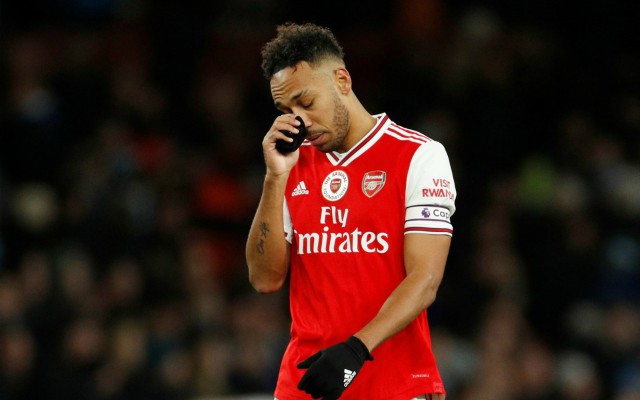 Arsenal are short on star quality

Arsenal still some way off the top

Once upon a time, Arsenal were the top side in the Premier League and their intriguing title races with Manchester United are still used as references till this day.

However, the days of the ‘Invincibles’ and double-winning campaigns are long gone and these days Arsenal are nowhere near mounting a challenge for the league.

The arrival of Mikel Arteta helped restore belief in the side and the Spaniard won two titles in his first nine months, while the extension of Pierre-Emerick Aubameyang’s contract also raised optimism among fans of the Gunners.

The fact that the north London side defeated Liverpool twice in the last two months gave fans hope that they could make it three in a row ahead of their clash at Anfield.

However, those delusion were quickly wiped away in what was a comprehensive defeat and reality check for Arsenal.

The hosts totally outplayed them and in many ways, Arteta’s side were flattered by the scoreline, as it could have been much worse.

Liverpool outranked their opponents in almost every statistic, had 24 shots to their three, 66% possession to 34%, and nine shots on target to three by the visitors.

While Mikel Arteta deserves praise for the incredible work he has done in such a short time, the Liverpool vs Arsenal fixture showed us that the Gunners are still some way off being considered among the elite sides in the league.

Robertson and Arnold are the chief creators for Liverpool

Jurgen Klopp struck gold with his full-back pairing of Andrew Robertson and Trent Alexander-Arnold but it could nearly not have been so.

Robertson had a big struggle to get to the summit of the game, while Arnold was an academy graduate who benefited from the injury to first choice right-back Nathaniel Clyne.

Nevertheless, the club is undoubtedly better off with the pair and a case can be made that the duo is the best full-back pairing anywhere in the world.

Andrew Robertson made an error for the opening goal but he made amends for that with a well-taken goal in the 34th minute.

The goal means that he has either scored or assisted in seven of his last eight Premier League matches, five assists, two goals and that was his 33rd goal involvement since signing for Liverpool in 2017.

His goal was provided by partner-in-crime Trent Arnold, for his first (of many assists to come) this season.

The Englishman broke the record for most assists in a single campaign by a defender last term (previously held by Andrew Robertson) and on evidence of this, two two of them will play a key role once again.

"Luckily, I popped up at the other end and I didn’t let that get to me." ?

Robbo's delight at making amends with a brilliant strike against @Arsenal last night ?

Throughout the game, both men proved too much for the Arsenal defense and Arnold had earlier hit the post with a sweetly struck shot that deflected off Hector Bellerin, while it was his cross that was headed out for Diogo Jota to score Liverpool’s third.

Jurgen Klopp’s assistant Pep Ljinders described a full-back to full-back goal as the ‘perfect goal’ for Liverpool and with Arnold and Robertson in this form, there could still be a lot of perfections to come. 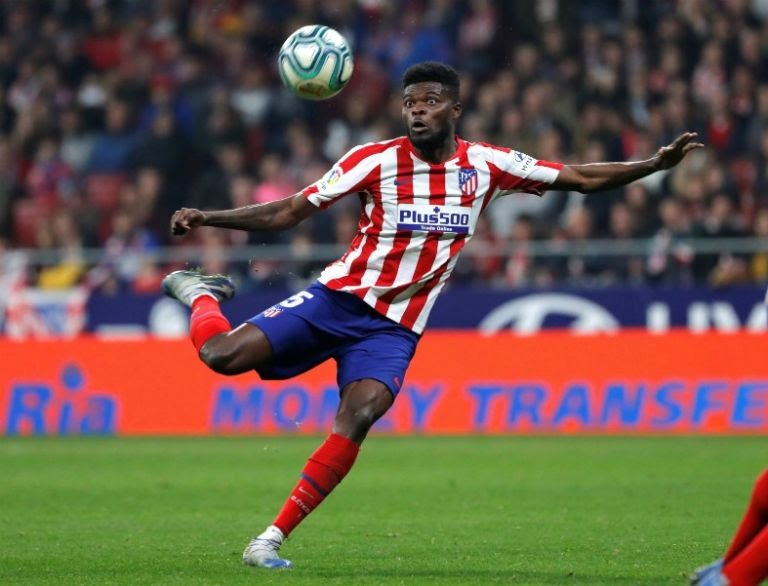 Arsenal have been linked with Thomas Partey

For most of the summer, Arsenal have been linked with holding midfidlers, with Lyon’s Houssem Aouar and Atletico Madrid’s Thomas Partey the two names at the top of the list.

However, progress for either deal has been slow and this could hamper the club’s ambitions moving forward.

This was made evident in the Liverpool vs Arsenal clash, as despite not having the compliment of Thiago Alcantara and Jordan Henderson, the Arsenal midfield was still no match for the hosts.

With one week left in the transfer window, it is imperative that Mikel Arteta pushes for the signing of a midfielder, otherwise he runs the risk of unraveling all the good work he has done. 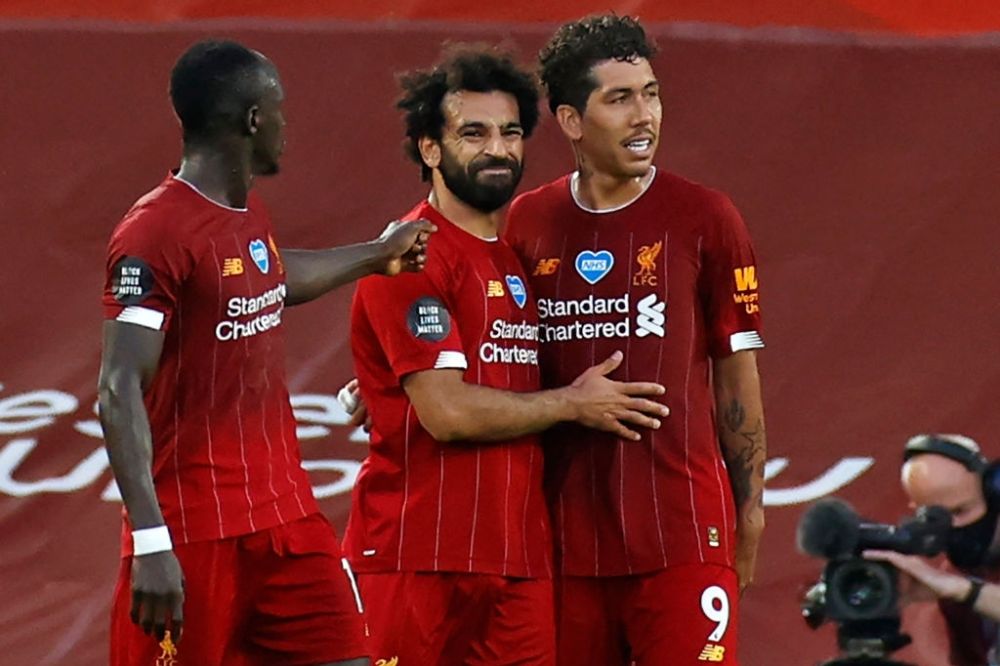 Liverpool are favorites for the EPL title

On a weekend when Chelsea stuttered and drew what should have been a routine win against West Brom, Manchester United needed a contentious penalty to see off Brighton, and Manchester City were trashed 5-2 by Leicester City on their own turf, it was just business as usual for Liverpool.

The Reds ran away with the league title last season and the aforementioned clubs were expected to give them a run for their money this time around.

They totally dominated Chelsea last weekend, despite all the money spent by Lampard’s side and if any doubts still remained, the manner in which they outplayed Arsenal just a week later should quieten the naysayers.

Jurgen Klopp has stated that his side are still hungry for more success and given the struggles currently being experienced by other top sides, the smart money would be on Liverpool going all the way once again. 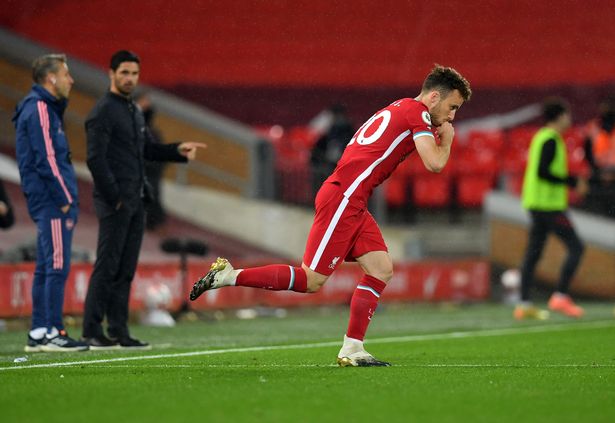 Diogo Jota recently completed a £45m transfer from Wolverhampton Wanderers and he made his league debut for the champions in the victory over Arsenal.

The Portugal international had played a starring role in establishing Wolves as an emerging force in the Premier League and it is expected that he will bring his unique skill-set to the fore at Anfield.

Against Arsenal e came off the bench to replace Sadio Mane in the 80th minute and in his 10 minutes on the field, he got into three great scoring positions.

The first of those saw his nerves get the better of him as he shot into the side net, while he was not assertive enough to take the second when Salah selfishly took the ball off him.

The third saw him break his Liverpool duck with a well-taken strike that underlines just how great a natural finisher he is.

For the last three years, the trio of Salah, Firmino, and Mane have played a key role in the successes enjoyed by Liverpool but they have been in need of competition to keep them on their toes and the arrival of Jota could provide Klopp with a viable alternative in attack.