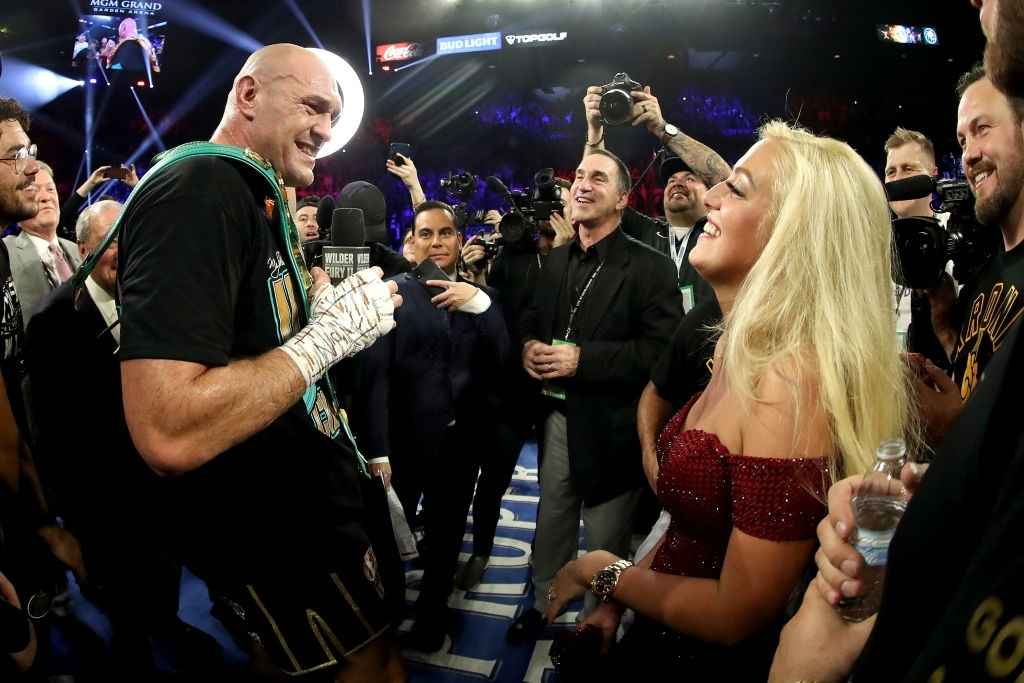 Tyson Fury is arguably one of the most successful boxers on the planet. Currently, he is the WBC and The Ring Heavyweight champion also. As they say, “behind every successful man, there is a strong woman”, so let’s take a look at Tyson Fury’s wife, Paris Fury.

Tyson Fury is married to his long-time love interest and teenage sweetheart, Paris Fury (formerly Mulroy). The 33-year-old British boxer is very loyal and leads a happy life with his wife and the children. Let us uncover all the details surrounding the pair. 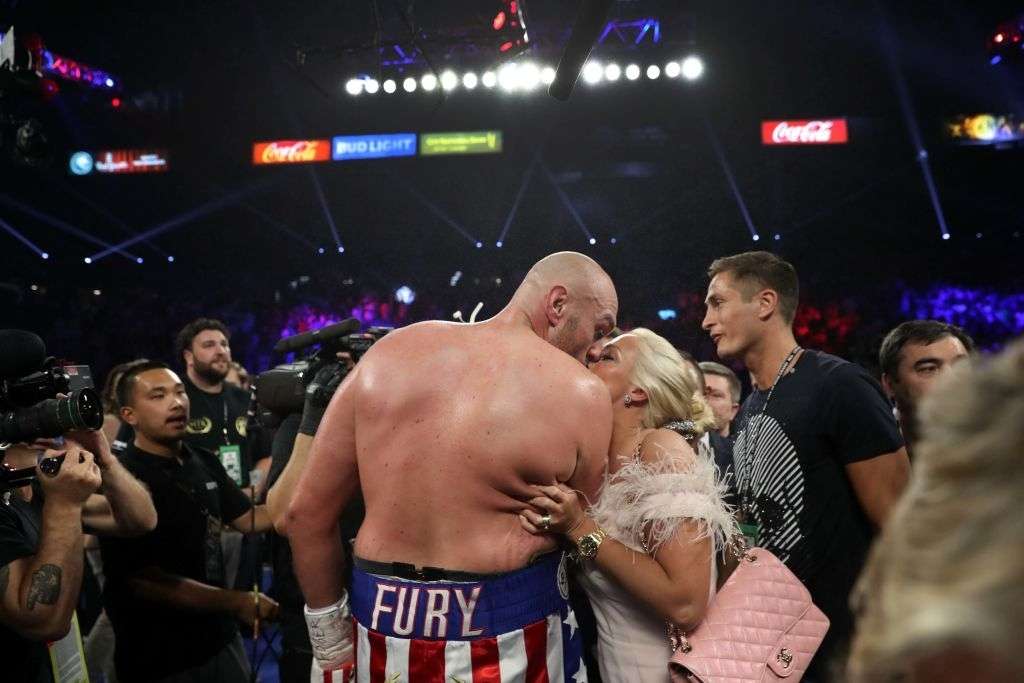 Tyson Fury gets a kiss from his wife Paris after defeating Tom Schwarz in a heavyweight fight at MGM Grand Garden Arena on June 15, 2019, in Las Vegas, Nevada. (Credits: Getty Images)

A strong, independent woman, Paris Fury is what people call an ideal wife. The Gypsy King has mentioned several times that his long-time relationship with Paris has turned him into a better man and in retrospect, a better athlete. The love story of the pair is straight out of a fairy-tale.

Paris Fury is an avid sports fan who has been spotted boxing on multiple occasions. Thus, this allows her to stay fit and keep her weight around 56 kg or 124 lbs.  In addition to that, Paris’ height is 5ft 8in, almost a foot smaller than her husband, who is 6ft 9in.

Paris Fury’s eye color is dark brown and her hair color is blonde. Moreover, Mrs. Fury has opted against sporting tattoos on her body. Interestingly, Paris is also a huge fitness advocate and does regular workouts to stay fit.

Paris Fury was born in Doncaster, South Yorkshire, in 1989 to a traditional gypsy family. Sadly, that is all the information that is available to the general public. In addition to that, Paris has a sister, Lynda Mulroy. As such, the two sisters still share a special bond as Lynda has been spotted on her sister’s socials a few times.

Talking about her education, Paris completed her high school studies at her local school. But, unfortunately, she had to quit her studies to take care of her family members.

How Did Tyson and His wife Paris Meet and Get Married? 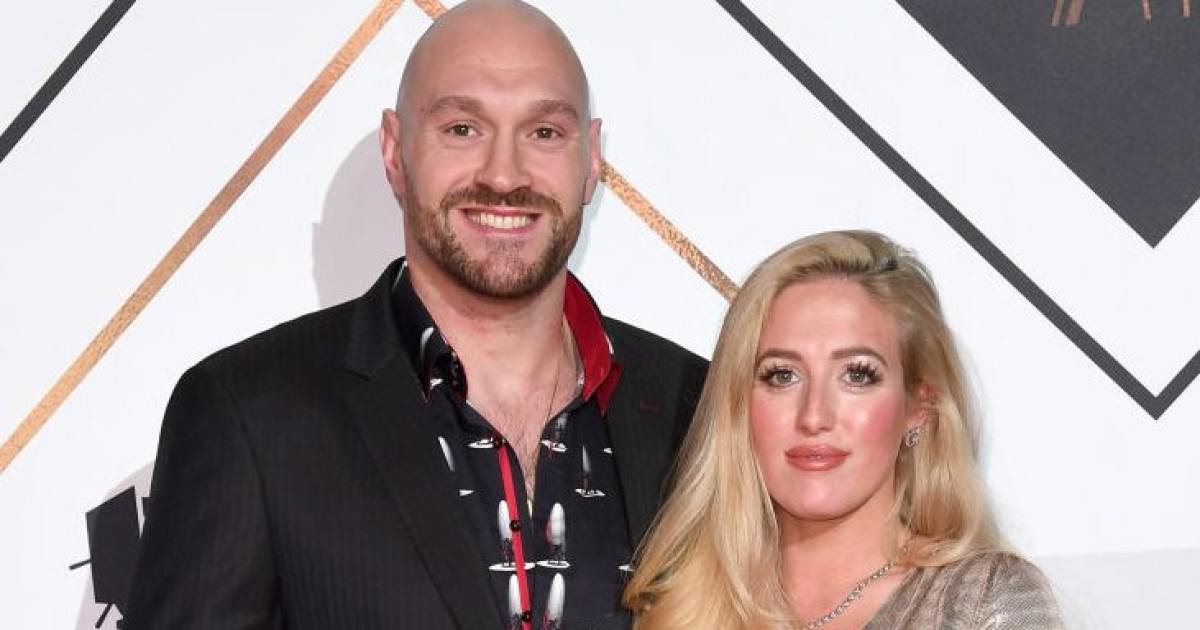 Tyson and Paris first met when they were 17 and 15 years old, respectively. As luck would have it, the pair were first introduced to each other through Tyson’s aunt in 2005. Almost a year later, the duo was re-introduced soon after Paris’ 16th birthday, this time by one of Paris’ friends. Soon thereafter, the couple started dating for the next two years, going on frequent dates to the cinema and ice skating.

Subsequently, the pair got married two years later in 2008. The wedding was in an intimate ceremony at the Chains Catholic Church in Doncaster, England.

Currently, Tyson and his wife Paris are enjoying the 13th year of their marriage. Above all, the couple has stayed together through adversity, notably Tyson’s mental health issues, depression, alcoholism, and weight gain in 2016. However, Paris has always been by her husband’s side and helped him overcome these obstacles. Moreover, it was her encouragement and counsel that propelled Fury to make his boxing return, and subsequently, become the world champion. Without a doubt, she will be there cheering Tyson on for his trilogy fight with Deontay Wilder.

Furthermore, the Fury family is currently residing in a £4 million mansion in Morecambe, Lancashire. The family also consists of the couple’s 6 children.

The boxing superstar and his wife are parents to six beautiful children, three sons, and three daughters. Interestingly, all three sons are called Princes. According to Tyson, he is a king, and his sons, Prince John James, Prince Tyson Fury II, and Prince Adonis Amaziah will be princes until they earn their rightful name.

The couple also has three daughters Athena, Venezuela, and Valencia Amber. Unfortunately, Paris also had two miscarriages, in 2014 and 2018. Previously, Tyson revealed that he wishes to have 10 kids with his wife, Paris.

The final cover to my book. pic.twitter.com/WjNDErrYHp

Moving on to her professional career, Paris Fury does more than one can imagine. Firstly, she is a wife and mother of 6 meaning she faces an immense task at home itself. Secondly, Mrs. Fury has also had stints as a TV presenter and also an author. As such, she will be releasing her book, “Love and Fury: The Magic and Mayhem of Life with Tyson” on the 28th of October, 2021. Currently, there is no information regarding her personal net worth and wealth.