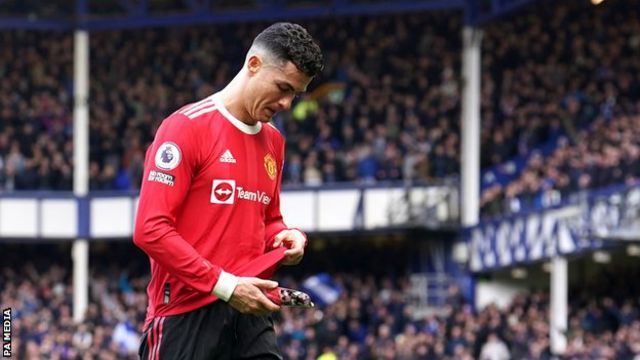 Portuguese Skipper Cristiano Ronaldo, 37, is a five time Ballon D’or winner and considered as one of the Greatest Footballers of All Time by a huge number of fans around the world after becoming the highest scorer in International football.

The Manchester United forward, who is also the most popular footballer on Instagram, offers a lot more in real life for the fans but often been criticized for different appalling behaviors.

Why did Ronaldo have such an outrageous reaction?

As Manchester United experienced a roller-coaster 2021-22 season, all the players including Cristiano became frustrated with negative issues on and off the field.

As a result, Ronaldo became more furious during a match in the Premier League at the Goodison Park after United’s humiliating 1-0 defeat against Everton which threatened the Red Devil’s existence on top half of the table.

Upon finishing the match that day, the Portuguese Skipper stormed through the touchline and apparently broke a young rival fan’s cellphone out of disappointment.

Cristiano Ronaldo smashed someone's phone after losing to Everton, according to fans at the ground 😳

Who was the victim of his rage?

Unfortunately, a 14 year old Autistic boy named Jake Harding was the victim of CR7’s abhorrence and therefore, his mother Ms. Sarah Kelly got so disappointed that she filed an official complain to the Merseyside Police against the Manchester United megastar following that incident.

Why did the child’s mom drop assault allegation on Cristiano Ronaldo?

Jake Harding’s mother Ms. Kelly proved herself a realist person by saying, “I’d understand if Jake was waving it in his face but he wasn’t near his face, it was down by the floor checking his injury.”

However, she then explained the reason for dropping assault allegation against CR7  by quoting, “He’s an autistic boy and he’s been assaulted by a football player, that’s how I see it as a mum.”

The former Real Madrid superstar posted on Instagram about his apology towards the young Everton fan.

C. Ronaldo even invited Jake Harding to watch a Manchester United home game at Old Trafford with that apology letter.