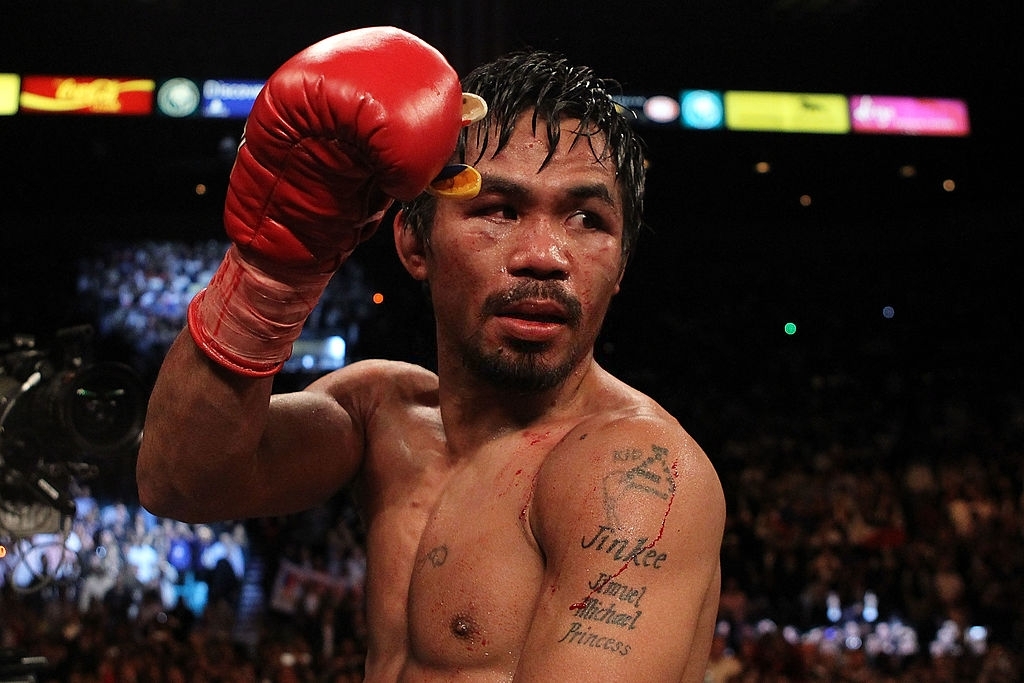 How good is Manny Pacquiao? It’s hard to argue he isn’t great. A man who has won world titles in eight different divisions is no doubt an all time great.

He made his professional debut over 25-years-ago, yet he is still at the top of the sport. Pacquiao entered the world of boxing with a four-round unanimous decision victory in his hometown. Even still, nobody could have expected the success he has achieved since that night.

Today, Pacquiao is the reigning WBA welterweight champion of the world. He is currently 41-years-old and is still dethroning the younger generation of this era. His last fight he defeated Keith Thurman to claim his title. Thurman, seen by many as the number one fighter in the division beforehand. Also undefeated, he had been at the top of the 147Ib division for years.

That has been the story of Manny Pacquiao’s career though. He has overcome defying odds. He has beat some of the sports greatest fighters across all weight divisions. Fighter of the decade for the 2000s with some of the most crushing knockouts ever.

When you discuss what his most memorable moments are, it’s very hard to pinpoint any obvious choices. Great fighters achieve historic runs, it will always be debated in the future. In 2008, Larry Merchant discussed the idea of this fight materialising. He presented the idea to Golden Boy Promotions, De La Hoya’s own promotion. At the time, 2008 was the year that Manny Pacquiao really announced himself onto the global scene in boxing. He outpointed long-time rival Juan Manuel Marquez in March to claim the super-featherweight title. After the victory he decided to move up to lightweight. He sensationally stopped American David Diaz to win the lightweight championship of the world.

Those victories grabbed the attention of Oscar De La Hoya. The Mexican was the biggest pay-per-view star in the sport at the time after the retirement of Floyd Mayweather Jr. De La Hoya himself was a six-division world champion. Pacquiao was on a tear at the time the fight came to fruition. Moving up through the weight divisions seemed no issue for Pacquiao, his knockout power showing no signs of being diminished. His speed was as lightning as ever. It didn’t matter who he fought or what weight, he looked better and better with every fight that passed. 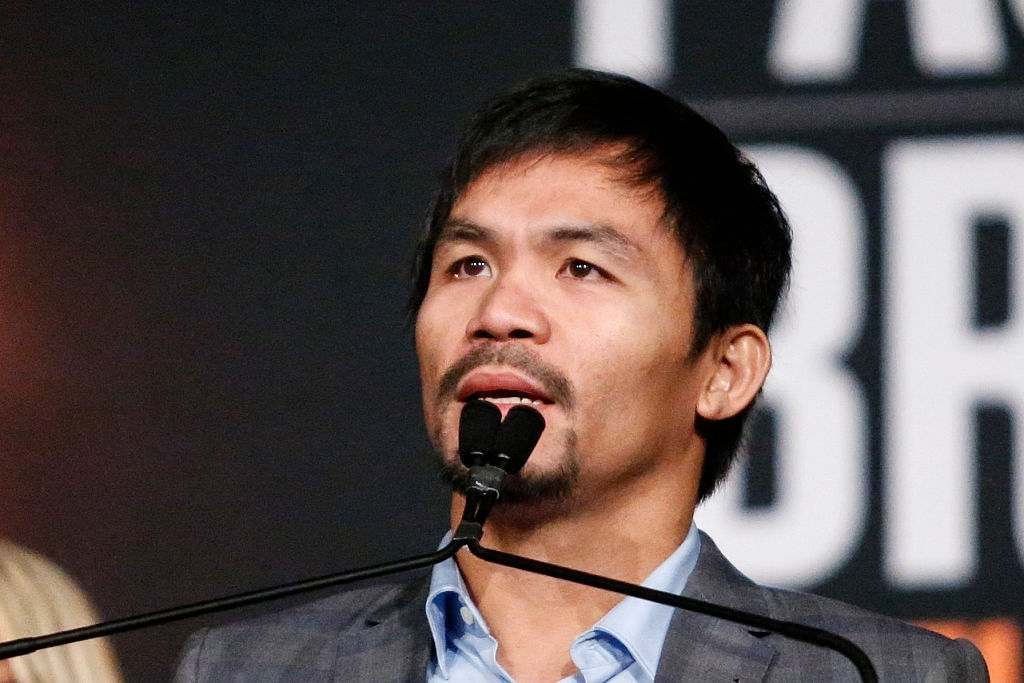 In a fight built as ”The Dream Match”, Pacquiao defeated De La Hoya via a 9th technical knockout. De La Hoya quickly faded as the fight progressed, a result from making the welterweight limit for the first time in years. Pacquiao’s speed, footwork and flurries of punches were showing to be a difficulty for De La Hoya early on. Pacquiao targeted the body throughout the eighth round, it ultimately showed to be De La Hoya’s demise and he was pulled out at the end of the eighth round.

The fight generated 1.25 million pay-per-view buys on HBO which included $70 million in revenue. Hot off the win over Oscar De La Hoya, Pacquiao would once again move to a new division in a bid to claim another world title.

British fighter Ricky Hatton was the chosen opponent. Hatton had only lost once throughout his career heading into the meeting with Pacquiao, and that was a knockout defeat to Floyd Mayweather Jr at welterweight just under two years before. Nevertheless Hatton, a natural super-lightweight, remained champion of the division and had never suffered a defeat at 140Ibs.

Pacquiao had his eyes set on becoming only the second fighter in boxing history to become a six-weight world champion if he could beat Hatton and win the super-lightweight title. The only other man to achieve that feet, none other than Pacquiao’s previous foe, Oscar De La Hoya.

Hatton himself made the decision to have Floyd Mayweather Sr as his trainer for the fight. A decision that surprised fans considering the fact he was knocked out by his trainers son two years before.

Pacquiao too fast and powerful for Hatton

The fight itself was built to be a fan friendly, aggressive and entertaining fight due to both fighters being come forward brawlers and big punchers.

Early into round one, it was clear that Pacquiao’s footwork and hand speed would be too much for Hatton. The first knockout came in with just a minute left in the first round when a big right hand floored Hatton. The defending champion got back to his feet but was against drilled to the canvas again. Hatton recovered to make it out of the round.

The second round, Hatton seemingly got his senses together. He started to come forward, his legs looked strong, but still he was being caught with Pacquiao’s lead right hand coming in. The fight ended when Pacquiao landed a devastating left hand that left Hatton unconscious. The finish was later awarded knockout of the year. 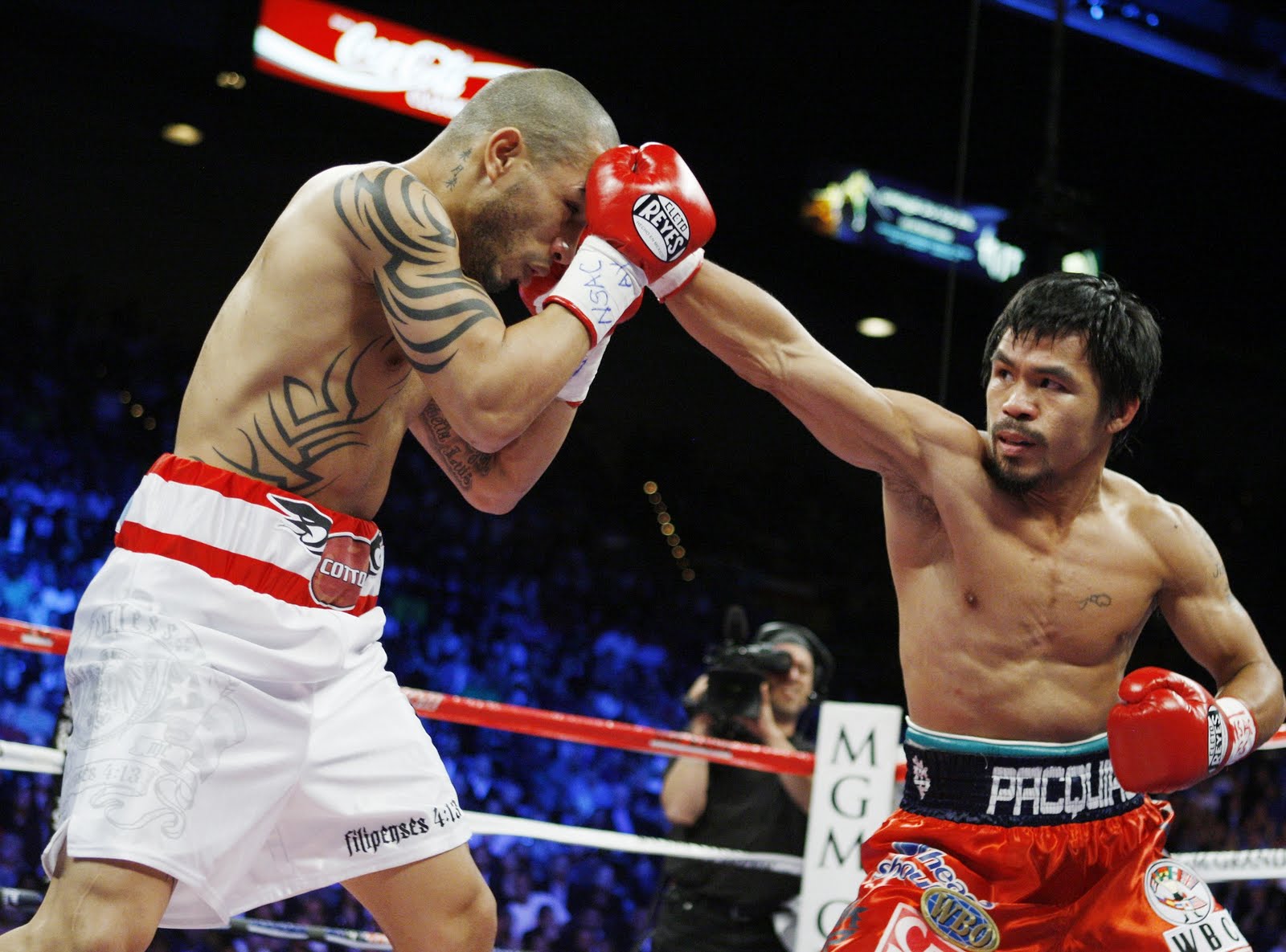 In the middle of 2009, Manny Pacquiao would once again move to another weight division in a bid to claim another world title. Miguel Cotto, one of boxing’s biggest stars at the time would put his WBO 147Ib title on the line. Cotto had only suffered one defeat in his career heading into the Pacquiao fight. In 2008 he lost his WBA welterweight title to Antonio Margarito, but the bout later became full of controversy after it was speculated that the Mexican had used illegal hand wraps in the contest. That speculation was furthered when Margarito was exposed for trying to wear them moments before his loss to Shane Mosley down the line.

The bout between Pacquiao and Cotto would be fought at a catch-weight of 145Ibs and held at the famous MGM Grand Garden Arena in Las Vegas, Nevada.

Pacquiao and Cotto go to war

Early on in the fight Cotto dictated the pace of the fight and managed to keep Pacquiao at bay from flying in with his fast combinations. In the second round though, Pacquiao would find his range and started to land his power shots to push Cotto on the back foot. In the third round, Pacquiao would deliver the first major blow in the fight, he knocked down Cotto with a huge right hook. Although Cotto managed to recover, in the fourth round Pacquiao sent Cotto down once more with an uppercut.

Cotto only had brief moments of success for the rest of the fight. The pivotal moment was the ninth round, Pacquiao was relentless, he continued to bust up Cotto’s face. At this point, Cotto’s own wife had to leave the arena, a comeback from her husband was near impossible. He was bleeding heavily, his eyes swelling and his will broken. Cotto got off his stool to make it out for the tenth round, but it was just under a minute and another Pacquiao onslaught that saw the referee jump in and stop the fight.

Pacquiao’s promoter Bob Arum, who had promoted names such as Muhammad Ali and Sugar Ray Leonard, hailed him as the”greatest fighter he’s ever seen” after the fight. 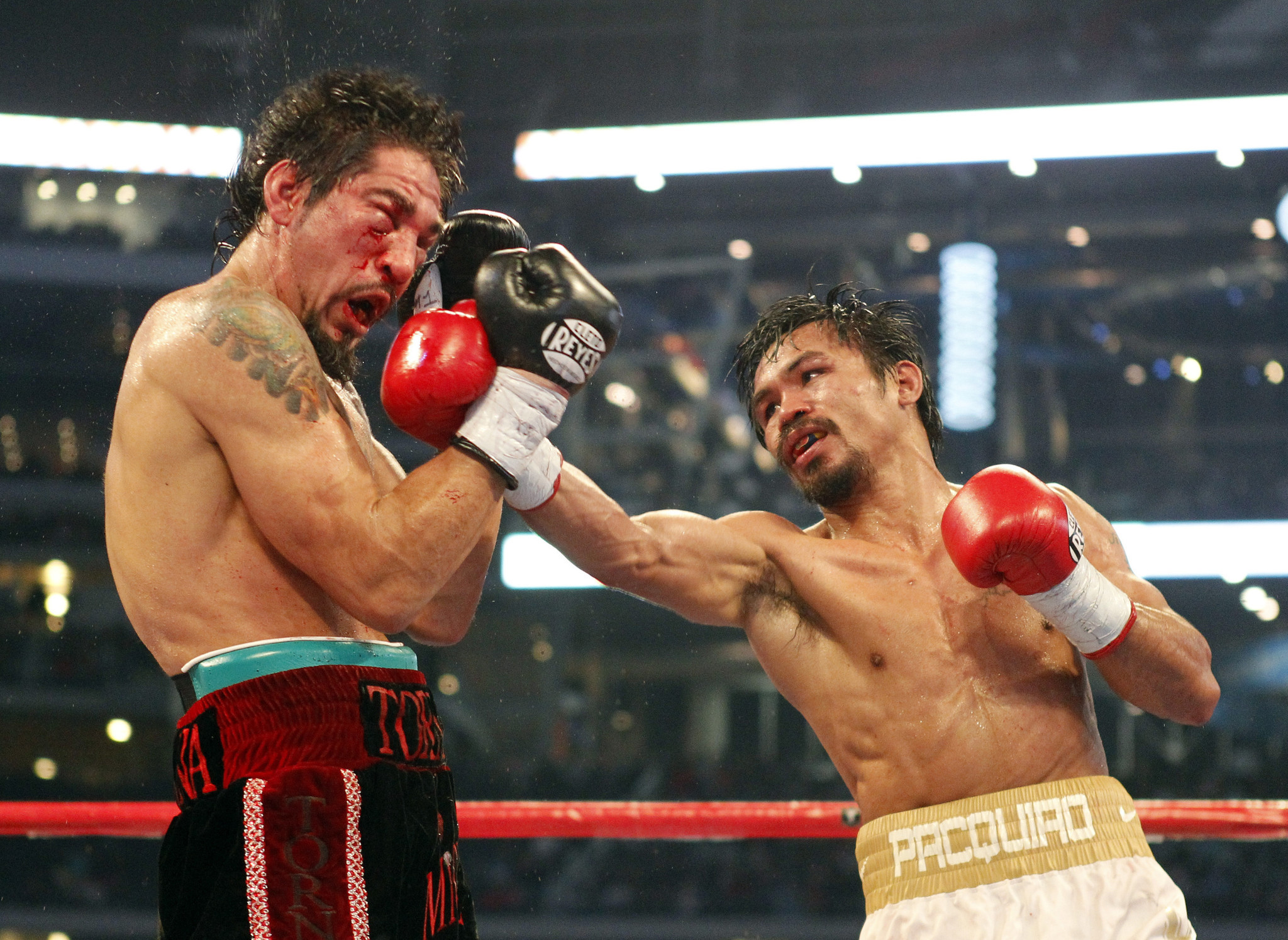 Negotiations broke down between Manny Pacquiao and Floyd Mayweather Jr for a potential super-fight, then an announcement came that Pacquiao would move up to the super-welterweight division to challenge Antonio Margarito for the WBC 154Ib title.

The fight would be contested at a catch-weight of 150Ibs due to the fact that Pacquiao was too small to get close to the full weight for the division, and Margarito had a huge size advantage of him. Pacquiao would weigh in at only 144Ibs for the contest, three pound lighter than the welterweight limit below.

Margarito may have had the size and strength as an advantage, he weighed in 17Ibs heavier on fight day, but Pacquiao’s speed, offensive creativity and his wasp like footwork showed to be the key factors in how the fight would later play out.

In the fourth round, Pacquiao stunned Margarito and looked certain to take out the bigger fighter with flurries of punches, but Margarito’s conditioning and granite chin managed to get him through the round.

The only bit of success Margarito had came in the sixth round when a left hook to the body sent Pacquiao flying into the ropes, but he was unable to sustain further punishment to really get close to taking Pacquiao out.

The entire fight proved to be yet another showcase of Pacquiao’s greatness as he won a comfortable unanimous decision to become only fighter in the sports history to become an eight division world champion. Margarito sustained a fractured right orbital bone and would later require surgery from the beating he took from Pacquiao. Margarito has since suffered with permanent damage to the eye and almost had his professional license taken away due to failing medical inspections. This bout wasn’t the first time that Manny Pacquiao and Timothy Bradley had met.

On June 9th 2012, Pacquiao defended his WBO welterweight title against Bradley. At the time Pacquiao was undefeated for seven years and was the established number one fighter on the planet. After twelve rounds, it looked like Pacquiao had won a fairly comfortable unanimous decision. However, the judges awarded a split-decision victory to the undefeated Bradley who become a two-division world champion in the process.

The rematch took two years to make after Pacquiao suffered a knockout defeat to Juan Manual Marquez later into 2012. He then took a year out of the ring. He returned in late 2013 to defeat Brandon Rios which set up the Bradley rematch.

In a fight that was built as ”Vindication”, Pacquiao defeated Bradley via a unanimous decision to avenge the first defeat and also reclaim his WBO welterweight title.

Bradley was much more aggressive in the rematch, he later revealed that he was looking for the knockout. Bradley claimed he knew he had to do more than he did in the first fight to win.

Pacquiao set a high pace early in the fight. He used his constant pressure and aggression to keep Bradley at bay. Although Bradley did have moments of success in the fight, the rematch was a lot more decisive than the controversial first meeting.