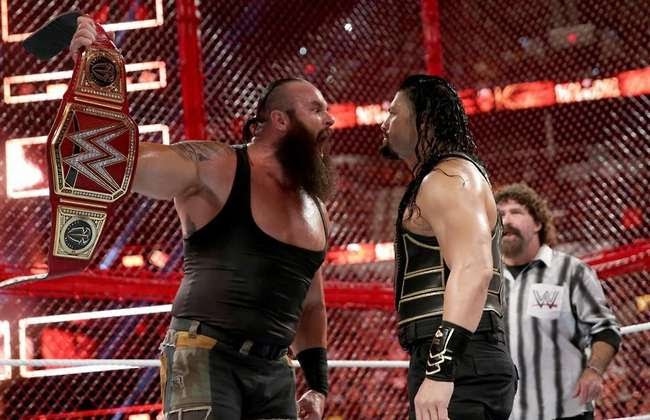 How tempting would it be to see the ‘Monster ‘taking on the ‘ Big dog’ in a huge match at the Friday night smack down? Too hot to handle, we reckon.

Well, after the recent shuffle in the RAW and Smackdown rosters, the fans are up for a treat with old rivals Roman Reigns and Brian Strowman going one on one for a championship match this Friday.

It all started when Roman reigns marked his return at Summerslam last month during a Universal title match between old friend Bray Wyatt and Brian strowman.

Although the monsters survived all those spears and superman punches at Summerslam, Reigns finally got his bragging rights sorted while securing Payback’s victory against Wyatt.

While all this happened, Strowman was wiped out from the whole picture even after standing strong with the Universal title just a month back.

Still, this would be the last chance for both the superstars to settle old accounts as Strowman has been drafted back to RAW in the recent rosters shuffle.

The stage is set for two of the most iconic superstars taking on each other for the Universal title, one last time. Reigns will be having Paul Heyman on his side and looking to his superb run in the recent matches; this one also looks ‘ not that tough’ for the big dog.

On the other side, the Monster would be itching to give that long-awaited ‘PAYBACK’ to Reigns for his interference during the title match at Summerslam, which handed him an unlikely defeat.

Strowman is about to bid adieu to Friday night smackdown, so we can certainly expect him to cut loose with his old rival. Reigns, on the other side, would be looking on to keep the momentum going.

So, it will be highly unlikely for Reigns to lose this match (even after getting all the hard beating from the monster). Still, it’s never over until it’s over, so we got to keep our popcorns ready for this ‘fiery battle’ this Friday night.

Reason why WWE broke up The New Day reportedly revealed
Roman Reigns vs The Rock on the cards? Here’s what Reigns has to say after getting a challenge from his cousin