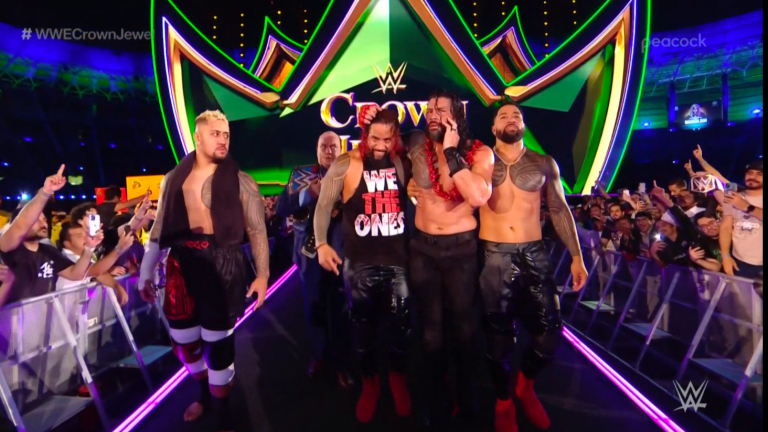 On Saturday, Logan Paul displayed some serious skills and a wide range of maneuvers at Crown Jewel. Nobody could have expected this from a YouTube star who is just only in his third wrestling match. Despite his best efforts, The Maverick fell short of defeating WWE’s undisputed champion.

Earlier, at Crown Jewel, the 27-year-old demonstrated why he belonged in the ring. The matchup between the tribal chief and the Maverick was already anticipated by the audience, though the addition of Jake Paul only adds to the excitement even more. Despite the fact that the match ended with the undisputed champion regaining the title, the social media personality stole the whole show.

Logan paul vs Roman reigns is arguably the best that WWE has given us this year
These two were frickin' great.
Absolutely mental‼#CrownJewel #WWECrownJewel pic.twitter.com/Y9kng0ilVm

The one thing that stood out the most of all was the jumping off from the top of the rope while recording himself on a cell phone. That was an insane move, as fans called it later. There were some more, like when he attempted to hit the 37-year-old with The Heartbreak Kid’s signature “sweet chin” music finisher, but it couldn’t connect. Either way, Paul showed a great range of maneuvers. Every time the Maverick reached the top, the crowd erupted in cheers.

When The Bloodline arrived to help their tribal chief and began beating up Logan’s buddies in the ring, the song “It’s Everyday Bro” began to play. The crowds knew who was coming to help Paul’s team, and it certainly landed as expected. The undefeated 6-0 boxer walked right into the ring and dropped one of the undisputed tag team champions.

What a match bro @LoganPaul 🙌🏿 pic.twitter.com/U0MnNLwOt5

The match ended with a flying spear from Roman, but the showdown between the Bloodline and the Paul brothers is still expected to continue. Because of how well people reacted throughout the fight, and yet fans can’t stop talking about it online. And afterward, his former boxing nemesis and Internet celebrity KSI shared his reaction on Twitter, saying, “What a match, bro.”