Top 10 best heel commentators of WWE of all time 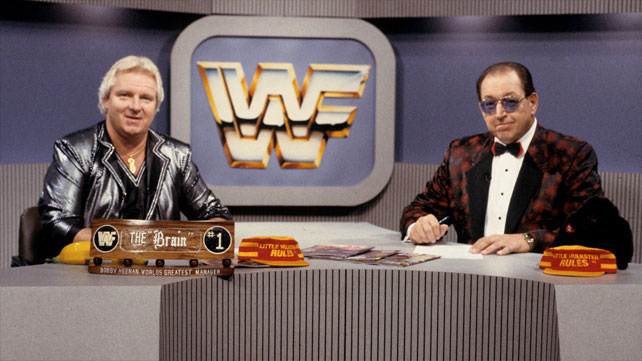 The wrestling business would never have been the same were it not for the heel commentators in the WWE. These commentators behind the easily-breakable tables have added much of the color and support to the heels.

The skilled men with a mic who the fans have loved to hate because they side with the heels is the reason commentary feels interesting. Ringside commentary is usually paired off one babyface commentator and one heel commentator which has given way to some of the best pairs.

Heel commentators are the much-needed variety in the WWE to add spice and reasons to boo the wrestler they support. Typically favoring heel wrestles and having a favorite among them, the heel commentators separate sports entertainment from just a play-by-play announcement.

Today we take a look at some of the greatest heel commentators in the WWE, who also found their perfect pair in the babyface commentator.

Mr. Perfect was a do-it-all in the sports entertainment business. From a heel inside the ring to one outside while calling the matches, Mr. Pefect left no efforts undone to show he liked boos.

An announcer who had a cocky attitude he often utilized to torment his announcement partner, Vince McMahon, Hennig was good at his job. He jabbed The Boss with insults and rubbed him all the wrong way to get a reaction out of him.

One of the best heel commentators WWE has seen, Mr. Perfect had joined the announcement table while in his way of recovery from an injury.

He rejoined the in-ring action upon doing a full recovery, quitting the announcement board, and releasing McMahon from his verbal attacks.

The reason Hennig does not find himself higher up on the list is that he did not remain an announcer for too long. Had he decided to pursue commentary for good, who knows, he could have coached Michael Cole to be who he is today. 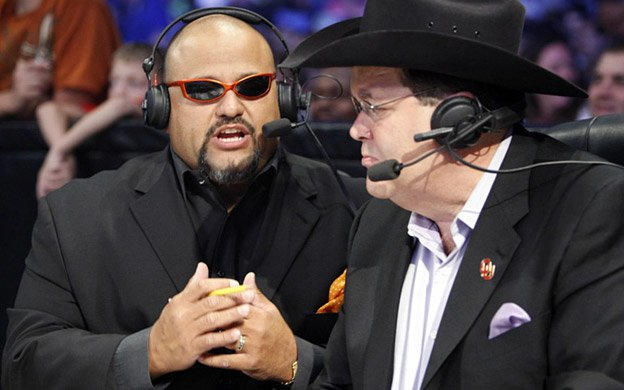 A former talent at ECW, Tazz was accepted into WWE when both the brands merged to form the present sports entertainment business. Tazz was only mediocre as a wrestler and his skills of cutting a promo were subpar at best.

Thus, when he was selected as the announcer back in ’01, many eyebrows were raised, given his questionable talents. However, a rather impressive color commentator was found in the former wrestler called Tazz.

Staying true to the nature of color commentators, Tazz was a perfect heel behind the announcement table. He was super partial to the wrestlers the audience booed, and disliked the babyfaces.

Tazz fit into the role perfectly, as if the commentary was his calling. He was original and in every way, devoted and dedicated to his job of hating faces and loving heels.

The Best In The World had done a short stint behind the announcement table too, in his long and pronounced career in the business. Punk makes an honorary entry in our list of heel commentators in the WWE due to his sheer talent in everything he did.

The ‘Untouchable’ in the commentary was good without trying, but that’s how obvious given how amazing Punk was with the mic. A natural when it came to talking from the heart, he was rather good at the job.

Although, he did play the role of the heel behind the table when he was the senior among Scott Stanford or Josh Matthews to establish is his dominance with the microphone. He would bully them, cutting them off mid-speech to flout their opinions and float his, instead.

I did a thing nine years ago. Couldn’t have done it without @JohnCena, @WWEArmstrong and most importantly the fans. That crowd, that atmosphere is something I’ll never forget. Thank you all. #MITB

However, once he was in RAW, Punk was a different person altogether. More docile, benevolent, and calling the right things, he was a perfect addition to the table.

He brought humor and a light-heartedness in the air of announcement and some of his comments are still hilarious, even years after his departure. Sadly, he did not spend more time behind the table because he was a fresh change from the repetitive feuds of Cole and Lawler. 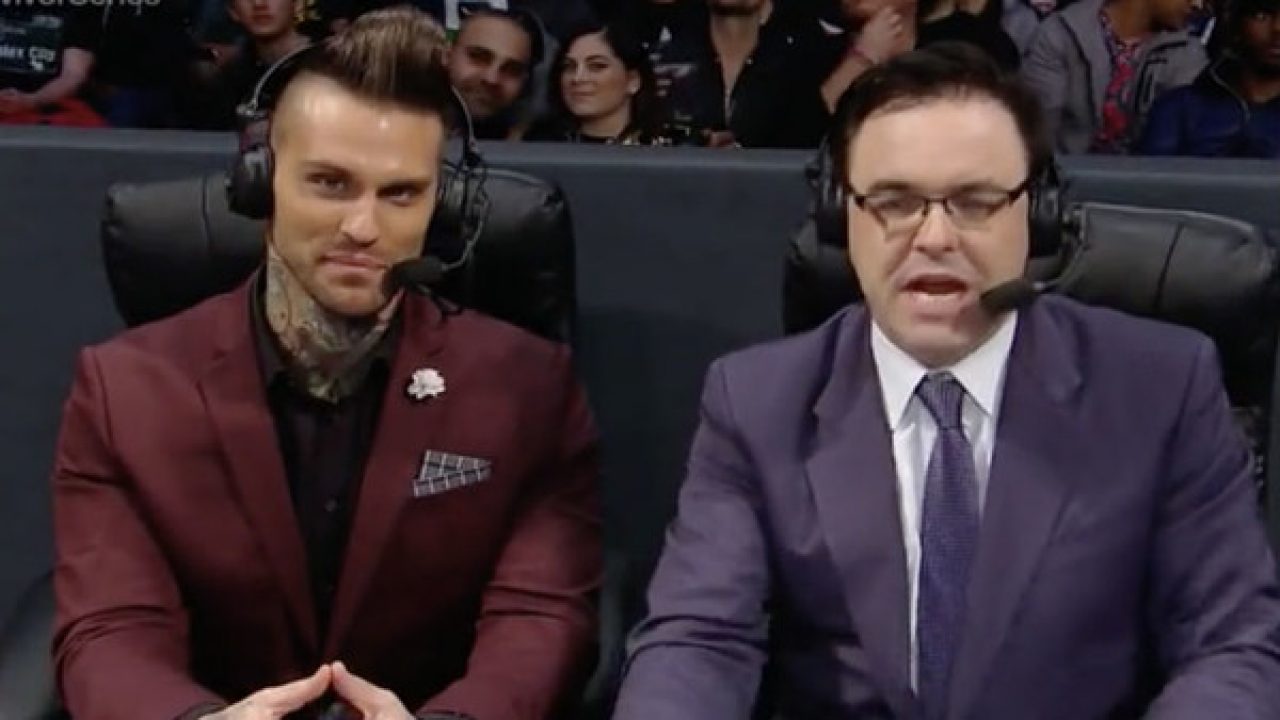 The former wrestler Corey Graves joined the commentators behind the table once he retired from wrestling, rather prematurely. A heel in-ring previously, Corey had no issues applying the same in his skills as a commentator.

As a person who has been inside the ring, Graves’ commentary was a deeper look into the wrestler’s psyche. However, his heel tendencies would quickly kick in and he was an unabashed sympathizer with the ones who received boos.

The heavily tattooed former NXT star would take sides with heels and get aggressive about defending their actions. Oftentimes, the results of him method-acting the heel part, got him into real-life issues.

His colleagues at the announcement table would get annoyed at his actions and this has led to arguments and verbal brawls backstage. A well-known among these was when Booker got annoyed at Graves calling his mistake out and threatened to beat him up.

The 5-time WCW champion was removed from the RAW commentary and he blamed it all on Graves. Despite, being a polarizing figure at his job, Corey has managed a position as one of the heel commentators in WWE today.

Coach is one of those people the WWE universe finds joy in rooting against. His character makes people hate him and this was adopted in a way by the company to make more money.

Coach is a color commentator who also provides blow-by-blow narration and was able to slide in his heel traits within it. He complains and rants about the babyfaces, thoroughly expressing his dislike towards them.

Out of this spite towards the ones on top, Coachman conspires ways to pull them down from behind the commentary table. Perfect heel move, this allows him to be booed some more while putting the faces over.

His skills as a heel commentator are defined enough to make him one of those people who can generate so many negative reactions. A talented person with the mic, Coach is one of the few impressive talents behind the table today.

One of the rare professionals who took the role of heel commentators of WWE to another dimension was Michael Cole. Since the start of 2010, Cole became one of the commentators who would be despised thoroughly by the fans due to his obnoxious and annoying attitude.

Strictly favoring the heels in every match while having his favorites such as Jack Swagger and The Miz, Cole would go to great lengths to support the heels. The play-by-play commentator was hated equally by fans and wrestlers, as revealed by the frequent attacks on him by wrestlers.

He would feud with JR and then Jerry Lawler, the former of which culminated in a match in Wrestlemania 28. His feuds with Jerry Lawler would lead him to often be stunned by Steve Austin and RKO’ed by Randy Orton, among others.

Relentless, he would still bat for the heels and even after reducing the intensity of his character, he is targeted as a punching bag by some of the superstars, to the merriment of fans. Michael Cole has garnered enormous heel hate as a commentator over the years from WWE universe and superstars, to be remembered amongst the great ones. The millionaire businessman joined the commentary box after a successful career as a negative character. Needless to say, his brash in-ring attitude could now be heard behind the table as a heel commentator.

His abrasive character as the clotheslining goon who burst open Eddie Guerrero’s head with a chair makes for one of the perfect heel commentators WWE loves. Unbothered by the things commentators are forbidden to talk about, JBL would speak his mind.

JBL is back on commentary alongside Michael Cole. Happy to see it.

A genuine heel with the mic, he has bullied the easy target Josh Matthews and Mauro Ranallo.  He would also go on to have some fun at commentary at Cole’s expense. The carefree attitude of JBL with which he would shutout the ones opposing him gathered him a lot of hate from the WWE universe.

The current advocate of the Beast, Paul Heyman had once done commentary behind the table. Replacing Jerry, Heyman brought a lot of freshness into the atmosphere of a newly structured WWE.

The man who never breaks character, Paul Heyman was immensely enjoyable with the mic. He garnered hate, rooting for the heels an abnormal amount. His chemistry with Good Ol’ JR was perfect, where the two of them formed opposites.

Heyman would irritate JR to the point, his actual frustrations would come out on the mic. This made Heyman push JR more because the audience loved it all. The pairing was not for a long duration, but what came off it was a goldmine of ringside commentary, proving why Heyman is money. 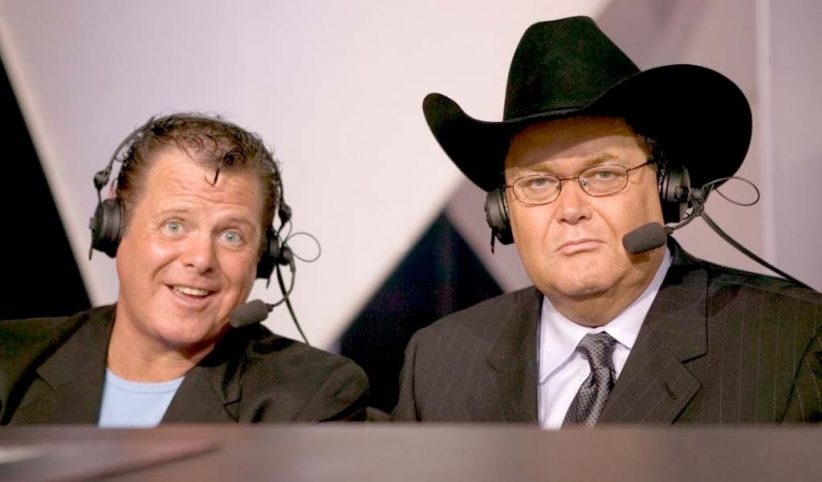 The characteristic feature of Jerry Lawler was being excited and rooting for the heels, at all costs. He would support the negative characters unabashedly and be especially fond of The Rock.

Lawler was opposed to Stone Cold and side with the Authority, explaining his devotion towards The Great One. His bond with JR resulted in classic soundbites which are still unparalleled.

One of the greatest duos in the commentary in sports entertainment was Bobby “The Brain” Heenan and Gorilla Monsoon. Absurdly heel as a manager as well as a commentator, Heenan was equally great behind the table.

He made Monsoon come off even sharper and charismatic when the two paired up. While Monsoon would narrate matches play-by-play, Heenan would dissect the faces and desperately root for the heels.

The classical combination of old-school polarizing commentary made bland matches of the early 90s come alive immediately. A staunch supporter of The Nature Boy, The Brain would put in enough effort to put Ric Flair over and celebrate his wins grandly.

Monsoon could not have been as phenomenal if not for Heenan and WWE universe is thankful for it. One of the greatest heel commentators of all time, Bobby “The Brain” Heenan paved the way for many such talents to follow.