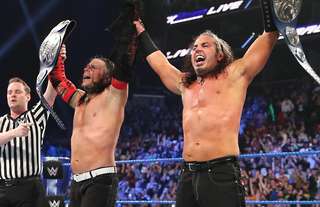 The rate of decline of the tag team division in WWE is quite shocking. Tag team used to be the heartbeat of professional wrestling in the 80s and 90s. These days, you will see random wrestlers put together in a tag-team-like manner fail miserably because they lack the necessary chemistry to perform to the level of tag teams of time past.

This brought to mind the number of excellent tag teams that have performed wonderfully in the past decade, thereby raising the level of how tag teams should be set up to make their legacy remain relevant in the wrestling profession.

As a matter of fact, should current superstars seek examples to emulate, they will surely not lack as the wrestling world has given a lot of legendary tag teams in the past. This piece will take you back down memory lane to take a look at a number of tag teams that have wowed wrestling fans for years in the WWE.

This team is one of the oddest in history of the game as the couple was the exact opposite of each other. The team consisted of The Rock (Dwayne Johnson) and Mankind (Mick Foley). The Rock was athletic, charismatic and well-dressed, while Mankind was rugged, deranged and unpredictable.

They were actually bitter rivals before Mankind offered to help The Rock when the latter challenged both Undertaker and Big Show. After they won the challenge, they went on to become unstoppable.

They were an on-and-off affair for most of their time together, but they still managed to win three World Tag Team Championships before they ended the relationship in 2004. They demonstrated to us how tag teams should operate.

This is a team that consisted of the brothers, Matt and Jeff Hardy, before they were later joined by Lita to be known as Team Xtreme. The Hardy boyz was well known for its daring high-flying moves and was considered to be the ones that began the use of ladders in matches.

Here are another fantastic tag teammates that stormed the world of wrestling with their incredible exploits in the squared circle. They were most famously known for their brutality in the ring as they overcame most of their opponents easily during their reign.

The team consisted of Ax and Smash. Crush later joined them though, but the first two are the main team members. They are known for using what could be called psychological warfare which involves them playing their trademark hardcore music at the start of a match.

The team was mostly dominant in the 80s when they held the longest Tag Team Title reign which lasted 478 days. They won three World Tag Team Titles during their reign. The most famous of their fights include the duels against The Powers of Pain, The Brain Buster, and The Colossal Connection.

This team would have gone places if not for the fact they were disbanded by WWE after a few years for each of them to pursue single careers. Most people thought they were brothers or twins but they were actually friends. In fact, they were childhood friends. They even have similar looks. They were very famous because they were both great wrestlers and very good comedic acts.

They have a normal routine which made them fans’ favourite during their reign. They would often show up in silly costumes to entertain the fans. They also have a five-second pose routine which always saw them striking different odd poses for the fans to take snapshots.

Each of them had achieved great successes in WWE before coming together as a team, and together, they remained successful. Their most famous matches include their classic matches with The Hardy Boyz and The Dudley Boyz, which saw them win their first two Tables, Ladders and Chairs matches.

They won seven Tag Team Championships, that is, aside the individual titles each of them won during their reign together. A very impressive tag team career.

This team consisted of half-brothers, Bubba Ray and D-Von Dudley. They are most famous for their hardcore style of wrestling. They are also considered by many to be the greatest tag team the WWE universe witnessed within the past 15 years.

They are well-known for their weapon of choice, which is a table. This always started with Bubba Ray asking D-Von to “get the tables”. They also have a signature move which they called “The Dudley Death Drop”, with which they dismantled opponents in the ring.

They are recognized by WWE as one of the most decorated tag teams in the history of the company with 18 World Tag Team Championship titles. They are a team with a great legacy and high standards for current tag teams to look up to.

This tag-team consisted of brothers-in-law, Bret “The Hitman” Hart and Jim “The Anvil” Neidhart. They are considered one of the greatest tag teams in WWE history. The company too rated them consistently among the best tag teams in the history of the business.

The two combined their perfect technical moves with raw strength. Bret, being the in-ring performer with star prospective and Jim was the stronger one with a loud behaviour. Their trademark move was called the “Pink and Black” attack in line with the colours of the duo.

Although, after the original team was disbanded in 2001, other teams consisting of either of the original members featured in fights using different forms of the name like “The New Hart Foundations”, “The Hart Foundation 2.0”, and “The Next Generation Hart Foundation”, the two were the most famous using the name and winning several Tag Team Championship titles

This is a team that consisted of Shawn Michaels and Marty Jannetty. They were only active for seven years during which they attained much success. As a matter of fact, they were more successful than many tag teams of their time that lasted longer.

Shortly after their break-up in 1992, Jannetty teamed up with Leif Cassidy to form “The New rockers” but never took off off the ground and Jannetty was forced to end the relationship. The team was not the strongest in the ring but was certainly influential, to the point that fans even protested when they were denied a World Tag Team Championship title due to ring malfunction.

What actually happened was that The Rockers defeated the then title holders, The Hart Foundation, but during the fight, a rope had broken from the ring which caused the fight not to be properly aired and in return, raised controversy.

Ranking third on our list of the greatest tag teams in WWE history come the British Bulldogs. This is a team that consisted of cousins, Davey Boy Smith and “Dynamite Kid” Tom Billington. They shined together and were considered the one of the best worldwide in the 80s.

Davey was well-known for his power while his partner, Billington’s greatest asset was his speed. They actually began as rivals, before they decided to combine their forces together to become one of the most powerful tag teams ever witnessed in the history of the company.

During their time together at WWE, they only managed to win only one World Tag Team Championship title. Nevertheless, the way they combined to demolish opponents and the level of telepathic understanding between them helped push them to the top.

Another one that dominated the wrestling world in style, The New Age Outlawz tag team was made up of “Road Dogg” Jesse James and “Badd Ass” Billy Gunn. They were referred to as “the most popular duo of WWE’s Attitude Era.”

This team achieved a lot of success and fame during the late 1990s, especially during the time they joined D-Generation X. They had the third-highest merchandise sales in the WWF, only behind Stone Cold Steve Austin and The Rock.

The team has six Tag Team Championship titles, having won the WWF edition five times before winning a WWE championship. They also hold the record for the most amount of time between title reigns in WWE history with more than 14 years between their last and current reign.

#1. The Road warriors (Legion of Doom)

This is a team that consisted of Michael “Hawk” Hegstrand and Joseph “Animal” Laurinaitis. They used the name “Road Warriors” during their time with American Wrestling Association (AWA), the National Wrestling Alliance (NWA) and the World Championship Wrestling (WCW) and adopted the “Legion of Doom” during their reign at the World Wrestling Federation (WWF).

During all this time, they maintained the same gimmick-two imposing wrestlers in face-paint. Their face paint and spiked armour were inspired by the Mad Max film, “Road Warrior”. They were physically larger than most of their opponents, thereby creating an imposing figure.

The Legion of Doom is certainly one of the most beloved and famous tag team in the history of WWE. They were well known for their face mask and painting. They also have a trademark move which they called the “Doomsday Device”, which involves one wrestler carrying the other to perform the move.