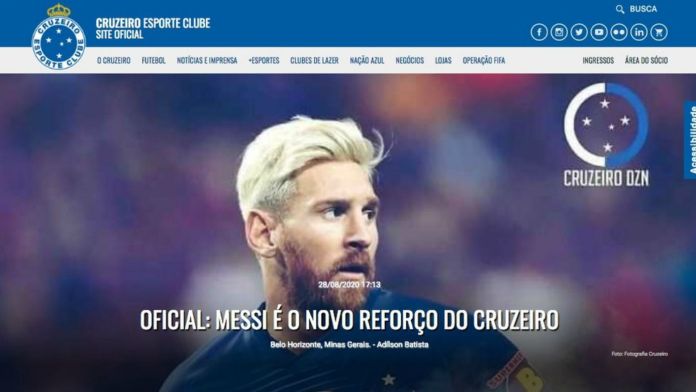 Cruzeiro confirmed the signing of Lionel Messi on an official post last night. However, an anonymous posted the official signing after hacking the club’s website who pulled off the prank to make some fun.

So the Brazilian club immediately took steps to remove the post and promised to take legal action against the hacker.

On Friday, the club literally shocked everyone by announcing the confirmation deal of bringing Lionel Messi from FC Barcelona.

The Barcelona star told his childhood club last Tuesday through a burofax that he wants to leave Barcelona. His decision was shocking to Barcelona board as Messi has been representing the Catalan club for 20 years.

After the news came in media, several European giants showed interest to splash cash to land the Barcelona legend.

Meanwhile, the player’s massive release clause and high salary are two of the prime obstacles to sign him.

Despite that, teams like Inter Milan, Juventus, Paris Saint-Germain or Manchester City want to sign the 33-year-old.

Cruzeiro were nowhere near having an interest in the player to sign as the club got down to the second division for facing relegation in 2019.

The statement of the false announcement

Lionel Messi was announced as a signing for Brazilian club Cruzeiro after hackers pranked their website.

“I’m very happy to be here with Cruzeiro,” the false news which came out on Cruzeiro’s website. “It’s a great honour to be a part of [head coach] Enderson Moreira’s team. See you soon, Foxes fans. I can’t wait to play in the Mineirao Stadium!”

Still, the club released an official statement saying the quote was false and they are investigating the issue.

“Cruzeiro Esporte Clube confirms that its official website suffered a brief invasion in its news publisher in the late afternoon of this Friday, August 28,” Cruzeiro stated.

“The attack, however, was quickly controlled and the post was deleted by our security system. The club can confirm that no information or data has been compromised or leaked, and the origin of the invasion is being investigated.”